Do The Rye Thing

Rye bread. If you grew up in New York, raised in a pretend Jewish family (come on, you know the ones - no bacon in the house, but when you went out for Chinese food, the roast spareribs were always the first thing ordered - along with the shrimp with lobster sauce), you know from rye. Pastrami on rye. Salami on rye. Tuna salad on rye. Patty melts at the diner. And so on.
Whenever you got rye bread at the bakery, the question always asked was whether you wanted your rye seeded or un. And you always got to eat the tiny little end piece after the bread went through the slicer, which was the best part, imo.

So, in order to relive a bit of my youth, and because there just isn't that much great rye bread in the bakeries any more, I'm currently in the process of experimenting with rye breads using no yeast. Sourdough ryes, and as mentioned before, sourdough drives me crazy.

To help me with the sourdough project, I recently bought a copy of Ed Wood's Classic Sourdoughs and have been following his sourdough template, which in one form or another is basically fermenting your starter (you do have a starter, don't you?) with a cup to a cup and a half of flour and a cup of water for 8 - 12 hours (depending on ambient temperature), adding another cup of flour and 1/4 cup of water and fermenting for another 8 - 12 hours, followed by shaping, proofing and finally, baking the dough. Here's what the dough looks like after the second long fermentation, when the dough has risen to the top of the bowl and fallen back a bit... 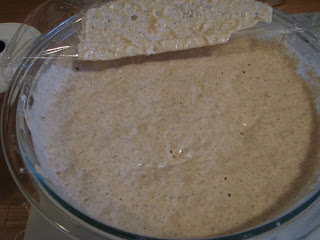 For rye and multigrain breads, I have been baking in loaf pans - I want something that I'm able to slice and freeze and which will give me nice even slices. The first recipe I tried was Wood's German rye bread - very light on the rye - about 20% of the total flour is rye. Must say the bread came out great, if lacking a bit of that rye flavor I'm looking for. Here's the loaf, and notice - such a beautiful crumb (btw, for you non-bread bakers, the crumb is what the interior of the bread is called, as opposed to the crust, which is, well, the crust)... 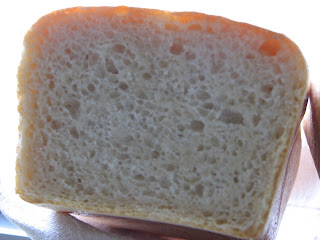 Then I baked a couple of loaves, with double that amount of rye flour, so about 40% rye and 60% Hecker's unbleached white (my favorite all-around flour). One was proofed and baked in a loaf pan and the other free formed. I have a feeling the doughs were over-proofed; you can see the holes in the proofed loaf and that's what happens when you forget the loaves are proofing; by the time I went in to pre-heat the oven, this is what the loaf looked like, topping way over the loaf pan (note to self - use those timers)... 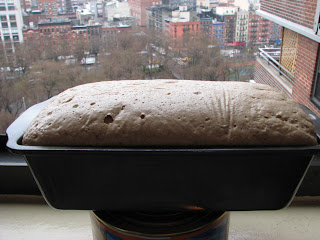 The boule also had blown up in it's brotform, and it separated dramatically while baking, which I'm pretty sure is do to the too long proofing period... 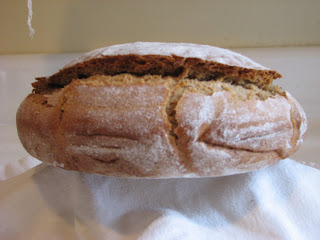 But the loaf pan bread baked up pretty nicely, though the crumb doesn't look as nice as the bread pictured above... 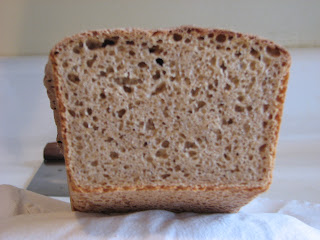 This bread's rye flavor is much more pronounced (notice the darker color), so I'm thinking that perhaps a bread with 50% rye flour will be just right. In France, a rye with less than 50% rye flour is called a pain de meteil; over 50% rye flour and you've got a pain de seigle. Balthazar Bakery here in New York makes a wonderful pain de seigle, btw.

But enough with the lessons already - you want that rye seeded or un?
Posted by Mitch Weinstein at 6:46:00 AM