Over on eGullet, there's a thread entitled I want a damn peach now, wherein peeps wax nostalgic about the flavor of old-time peaches. Now, as you and I and Significant Eater know, nothing tastes like it did when you were in your youth, does it? In my youth, seriously folks, we had a fruit and vegetable guy in a truck, who would drive around and sell some delicious fruit (in my memory) to the neighborhood...and no, it wasn't a horse drawn truck, weisenheimers.

Of course, one can pay big bucks to have real, organic, California tree-ripened peaches, picked by nubile virgins and packed in god-knows-what, shipped to you via 2 day Fed Ex - they'll probably cost around $5 a peach - or more...and they may even be worth it. Once, when SE and I were driving from San Francisco to Tahoe, we stopped in the heart of peach country and devoured some delicious peaches that had been picked that morning. Another time, in Bologna, we had a simple dessert of peeled peaches, tossed with a bit of a semi-sweet wine and a hit of sugar, and they were amazing.

But, of course, we're here now, and what to do, what to do? Well, luckily for me, I can walk up to my corner, see what Mohammed has for sale, and if I'm lucky, there might be some peaches which, if handled correctly, can be pretty delicious too - and at 3 for $2, much cheaper than those Fed Exed babies. They even look pretty... 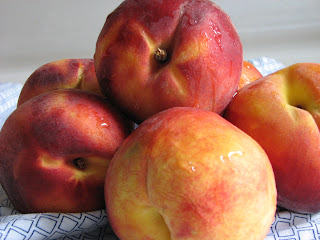 Of course, handling them correctly means a few things. First of all, pick good ones...they should have a bit of a peach aroma, they should be unblemished, and there shouldn't be any green background in the color. Then, to "ripen" (and guess what, they don't ripen anymore after they're picked, though they do go through some enzymatic changes and get softer and juicier, their sugar content doesn't increase), the peaches should be placed on a counter (or in a paper bag, but I like the counter better), not touching each other, and left for a day or two or three till they're soft to the touch and have a nice peachy smell. Of course, you can refrigerate the peaches then, but never before - that's what turns them mealy and awful, and you don't want that, do you?

So, the other day after buying a half dozen monster size peaches from my fruit guy, I decided to make a nice peach crisp. Which is pretty much the same as an apple crisp, except - yes, I used peaches instead of apples. First, the peaches were peeled, which is accomplished by blanching - cut an "x" in the bottom just through the skin, place gingerly in boiling water for 15 - 20 seconds (a Chinese spyder/strainer comes in handy), and then plunge into ice water - the peel will practically slip off. Then, they were cut up and macerated with a bit of sugar and lemon juice and a pinch of salt - to turn into this (pretty yummy looking)... 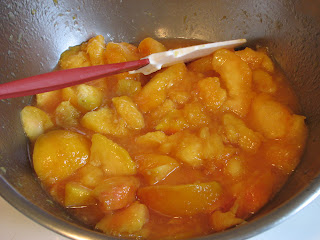 While the peaches were macerating, or bathing in their own juices, I made the topping. In a food processor, I put about 6 T cold butter, 1/2 cup of flour, 1/2 cup of sugar (you can use some brown sugar), 1/2 cup of chopped nuts (I used almonds, but I imagine hazelnuts or pecans are good too), 1/2 tsp. of cinnamon, a bit of nutmeg, and that all important 1/2 tsp. of kosher salt, and pulsed till it all looked good. If you've got a good crisp topping of your own, just use that.

Put the peaches into a baking dish that will hold them, top generously, and bake in a 375 degree oven for a good 40 - 45 minutes. Tip of the day - put that baking dish on a larger sheet pan or put a cookie sheet underneath the baking dish in the oven; that way, if some of the peachy stuff bubbles over, you're not cursing away while trying to clean the floor of your oven - like I was!
And if the topping isn't brown enough for you, up the temp to 400 for an additional 5 minutes. Remove and let cool - I like this served at room temp, and I also made pistachio and vanilla ice creams to go with it. No complaints and tasted just like the old days. 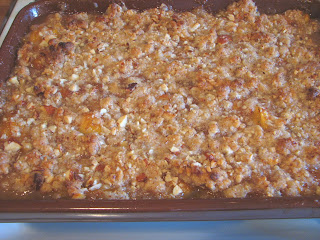 Email ThisBlogThis!Share to TwitterShare to FacebookShare to Pinterest
Labels: Dessert