Since I'm probably the one millionth blogger to write about tomatoes this summer, I don't know how much more to add that most of you haven't already heard. Here on the east coast, of course, we've all been made aware countless times about the "late blight," a disease that affects tomato plants and which was also responsible for the infamous Irish potato famine of 1845. Yes, tomatoes and potatoes come from the same family of plants.

Since we all (foodies, chefs, writers, eaters, etc.) anxiously await the arrival of tomato season, our loss this year is deeply felt. Last year, pre-Tasty Travails, great tomatoes were in abundance. Here are a couple of shots I took of my farmer's market forays in '08: 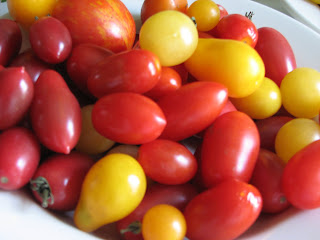 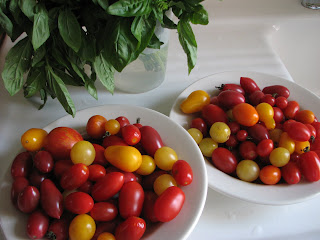 As can be seen, no shortage of colors and varieties (there are various cherry, grape and heritage "cherry" tomatoes) last year. Same for the large heirlooms; 2008 was, iirc, a banner year, and I was making tomato salads throughout August and September and October. Here's just one, which looks as though it has 6 or 7 tomato varieties in it, along with some freshly torn basil, a bit of fresh mozzarella and a drizzle of olive oil: 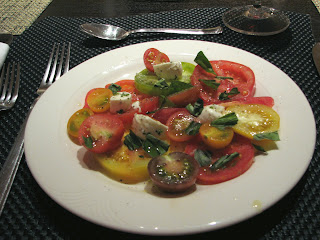 Fast forward to this year, and no such luck...certainly not from local farmers. With the copius amount of rainfall early in the season, coupled with the blight, 2009 is shaping up to be a disastrous year for farmers and consumers alike. To be sure, tomatoes can be found. Maybe a farmer was lucky and his or her field survived unscathed. Perhaps the tomatoes were greenhouse grown. But many of the tomatoes I saw last week in the market were not too prime. And at $4 - $5 a pound, buying a not-prime tomato doesn't really work in my book.

However, I was able to cobble together a small sampling of heirlooms, and Significant Eater and I have had at least one nice tomato salad so far...the basil is great, by the way, so all is not lost. It just feels that way, and to all the tomato farmers and home gardeners out there, we wish you a better season in 2010. Here's my 2009 salad of heirlooms 3 ways: 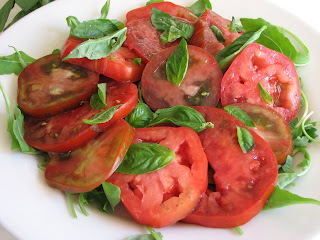