During our DC apartment renovation, one of the deals I worked out with some wonderful new neighbors (there were a few, trust me) was the use of their outdoor parking space during the day, in exchange for me cooking a bunch of meals for she and her husband, as they were about to have a baby.

Now, their baby wasn't necessarily supposed to show up until a bit after we had moved into the new joint, but sometimes (so I'm told) babies show up early - and Amelie did - congrats, by the way, to the happy mum and dad.

When I received a call that Am had made her appearance, I detected a slight desperation in dad's voice - so the second thing I did (the first was to bring them some decent take-out Chinese food) was to make a couple of batches of soup while in NYC for the weekend, freeze it, and bring it with me on my drive down to the district.

Soup is a great comfort food; during a cold winter like this one has been, what's better than a hot bowl of soup? (All right, a few things, but not that many.) Anyway, with a few ingredients specific to each soup, and your classic mirepoix, soup's on. Here's some of what I had to start with: 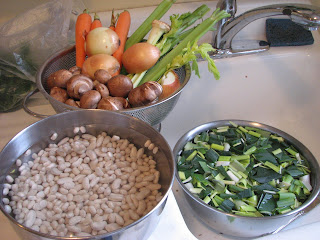 Onions, carrots, celery, garlic, leeks and herbs for both soups. Beans and bacon for one, and mushrooms and cream for the other. And you know the drill, don't you - cook bacon, sweat mirepoix, etc. etc. Layers of flavor is what you want. You get that from, for instance, first cooking the bacon and rendering the fat out of it, and then adding the mirepoix to that, slowly cooking the mirepox and then adding the mushrooms, slowly cooking the water out of the mushrooms and then adding your liquids (stock, mushroom soaking liquid, even plain water), etc. etc. It's simple, and at the beginning your soups might look like this: 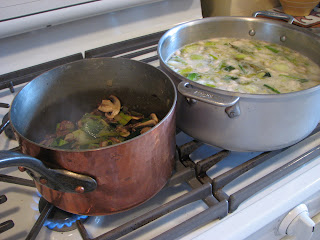 The mushroom soup will go faster than the bean soup, if you hadn't guessed. So, once it had fully cooked and had a chance to cool down, I pureed it in the blender till it was nice and smooth. By the time that was done, the bean soup was fully cooked, and they both went into the fridge overnight...I almost always think that soups taste better the next day. Then, when ready to dine, reheat the soups; if they're too thick, thin them out - I used water for the beans and cream for the mushrooms. Taste for salt and re-season if necessary, please.

Of course, I couldn't bring ALL that soup with me to DC, so Significant Eater and I had a really nice meal of 2 soups and some just-made focaccia - it's behind the mushroom soup pictured here... 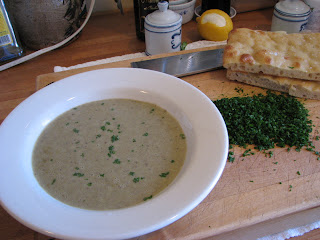 And the bean soup was tasty too... 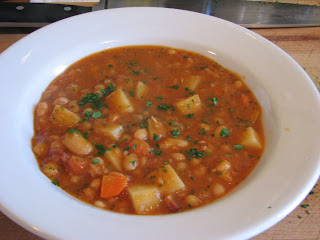 Now, when your wife (Significant Eater, in my case) or significant other asks you why you save all those empty containers from Chinese, Vietnamese, Thai and Malaysian take-out, just show her this...they're perfect for freezing soup and also to make your new neighbors full and happy. 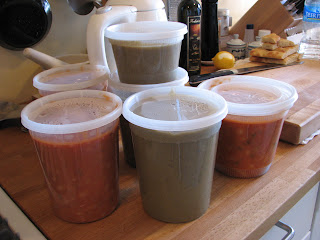