It was Significant Eater's birthday this past Friday, and what better way to celebrate than to have Saturday brunch at the newly opened Keith McNally spot, Pulino's? Well, just so you don't think I'm a classless sort, I did cook late dinner on Friday night, so once the birthday gal arrived home we had Champagne cocktails along with bucatini all'amatriciana...and it was good.

But back to Pulino's...the new McNally spot - well, McNally along with his personally recruited San Francisco chef Nate Appleman; after all, you do need a chef. Breathlessly chronicled from the time the first sledgehammer came down inside the interior at Houston and Bowery, on web sites like eater.com, many grouches in the food community were poking fun of and pre-dissing Pulino's before a bite was to be had.

Now, Nate is a damn good chef (hey, he's won awards), to which both SE and I can attest, having eaten at his SF restaurant A16 any number of times. As a matter of fact, it was there that I remember eating a (my first) miraculous crunchy pig-ear salad, along with delicious pastas and great (for SF, at least) pizza - though what type of pastas and pizza we had are lost somewhere in the back of my brain.

So, how was brunch? First, I'll start by mentioning (as if no one else has) the fact that Pulino's look is practically a carbon copy of the Schiller's look - after all, if something works, why fuck with it? Well, the bottles on the wall are different, but you get the picture. (By the way, on my two walks by Schiller's this past weekend, the place is still packed, 7 years on.) Giant windows open onto the Bowery - and right off the bat that annoys me. Does it really need to be noisier inside a McNally restaurant? All those trucks and buses driving by increase the noise factor a lot, so I'll like those windows better in the summer, when they're closed up for air conditioning.

Plenty of fancy, dressed up people in the crowd. Actually, everyone except me. Or, and more likely, people dressed up by pretending the outfit they threw on came out of a Salvation Army store. And a nice service staff - some with accents even! You could probably bring your parents, though they won't be able to hear you.

The menu is big by brunch standards - but since brunch is my least favorite meal, how do I really know that? Anyway, lots of other stuff on the menu; I was happy about that. And what'd we have? Started with a couple of salads, and then onto two pizze for our "entrees."

The roasted fennel salad was prepared nicely - a bed of endive, arugula, frisée and red onions complementing the fennel nicely, and dressed right with a mustardy vinaigrette. Groundbreaking? No, not even the currants make it so - but think of how many places screw up your salad with too much vinaigrette, and you'll appreciate this one that much more.

Our second salad (and the only dish I took a picture of all meal) was the astounding Smoked Sablefish. Doesn't sound like much, right? Basically a riff on a Sicilian salad of celery and bottarga, it takes slices of luxurious smoked sable, plops them on a schmear of bottarga agliata, and strews some thinly sliced celery, celery leaves, parsley leaves, dill and capers on top. And the next thing you know, you're hoarding the plate as if you weren't getting fed for another week. 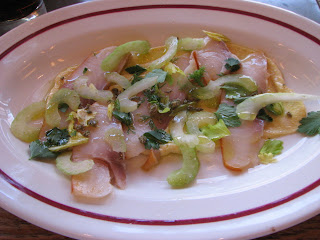 Now, the sable comes from the guys (Acme - beep beep) that supply Russ & Daughters, so even if they're not getting the pick of the litter like Russ and his daughter do, it's gonna be good. But what really puts this dish over the top is the bottarga agliata - sort of an aioli made with bread crumbs and bottarga - all I can say is, ask for bread. And you'll be mopping up every last drop off the plate, perhaps even giving each other looks like Significant Eater did to me when I greedily swiped the last crust of bread (Balthazar, as if) out of the basket.

On to the pizze, and, what can I say? I didn't love either of the two we ordered; not the salame piccante nor the Margherita. The crust was just too damn crispy for me. Nothing light and airy about it. The margherita's basil was put on before baking, meaning the basil came out as burnt leaves tasting like, well, burnt and looking worse. In my opinion, it seems as if they make a sauce (rather than use San Marzanos right out of the can) to use on the pizza - that sauce, after baking, comes out tasting like tomato paste - not what I want on my pizza. I do believer that there's pizza potential here (c'mon, Nate, gimme that SF pie - fuck the Bowery), but in the time being when I crave pizza, I'll be going first to Keste, Motorino or Arturo's. Maybe making my own even. Which I'm sure will matter not a whit to the yearning masses.

And brunch wasn't cheap - for the 2 salads and 2 pizze, along with a glass of rosé and a soda, we dropped almost $90. But I am looking forward to trying more of Mr. Appleman's food - and dinner reservations have been secured. After all, he's a damn good chef.
Posted by Mitch Weinstein at 11:27:00 AM