What Has DC Got That NYC Doesn't?

You know, as a dyed-in-the-wool, jaded and especially annoying New Yorker - born in Brooklyn, even - there isn't much that impresses me, especially when it comes to restaurants, chefs and food. I mean, we've got it all here, under one roof. Access to the best seafood and produce (try the green market some day if you think I'm kidding), a bajillion restaurants (lots of them good, some great), hot cocktail lounges, awesome kitchenware shops, etc. etc. But there's one thing we don't have, and DC does, which should make a lot of NYers jealous...and that's José Andrés. And as if that wasn't inglorious enough, even LA has him now, or at least has a restaurant of his...and it's a friggin' 4-star.

So, DC, thank your lucky stars...because you've got something that NY doesn't. But now, with Significant Eater and me kinda living in both cities, we've got José too. And the other night, we got Zaytinya...and we got hooked.

First off, we walked out of the metro at the Chinatown station (the metro is basically DC's subway system - but way cuter and cleaner than NYC's could ever hope to be) and there it is. Easy as that. All you drunkards out there - no worries about driving, though if you're getting drunk late, remember the system shuts down around 1 AM. Even though our reservation had changed due to a late cancellation, we were seated immediately, at a great table with a view of the action on the streets as well as inside. See how happy Significant Eater looks, even though her plate is empty as she's anxiously awaiting food delivery. 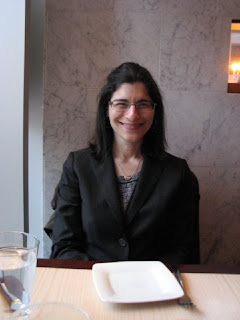 It was soon to be...first the puffy, hot flat bread, along with this cutesy dish of olive oil and pomegranate molasses. I prefer no cutesy, but wtf, it must impress some people, just not me - remember, jaded New Yorker, etc. etc. 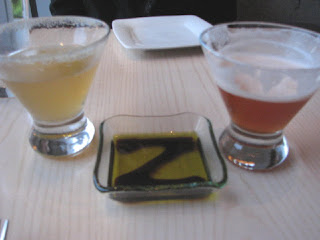 Oh, the cocktails surrounding the olive oil weren't bad - SE had a Greek sidecar (Metaxa, cointreau and maraschino), and mine was something or other that I consumed in like 30 seconds; it was that tasty and I was thirsty, after all.

According to our charming waitress, SE and I should probably order between 4 and 6 dishes to be properly sated. HAH! She had no idea who she was dealing with, and as we quickly ordered 9 items, she nodded approvingly.

The first dish to arrive (everything we ordered was paced properly and in the right order; at no time was our table covered with more dishes than two humans could properly consume) was a revelation. Simply fresh roasted chickpeas. In their pods. Like edamame, but so much more, the pods are first roasted and then drenched in an olive oil/lemon juice and dill bath, which we couldn't get enough of. Messy - yes. Lots of bread dipping - yes. Bread runs out and is refilled - yes. What more can you ask for? 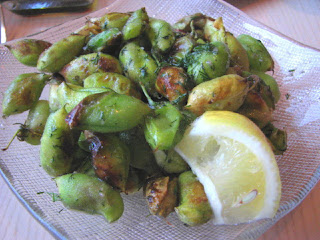 Alongside the chickpeas were served kolokithokeftedes, zucchini and cheese patties in a caper/yogurt sauce...an order of 4, brown and crispy outside, smooth and creamy in. The perfect combo, no? 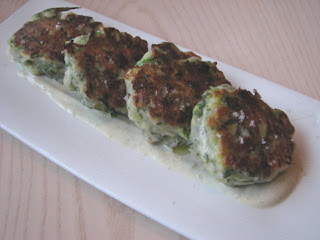 As we moved on, it became apparent that these guys really know how to cook. Sure it helps if you love the cuisines of Greece and Turkey; lots of yogurt, dill, capers, feta, mint, garlic, etc. - and we do. Though smoked white asparagus with smoked yogurt sauce isn't your everyday Greek fare, and drew a comment from SE as to it's deliciousness... 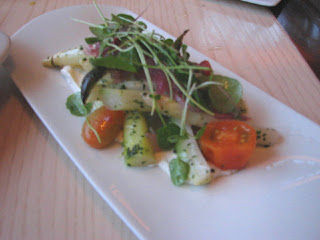 It's obvious from above - a vegetarian can eat quite nicely at Zaytinya. Sadly, they'd be missing a lot. For instance, the Garides Me Anitho, shrimp sauteed with shallots, dill, lemon juice and mustard almost caused a fight to break out at our table; it was that good. They couldn't have the spiced quail couscous, with little chunks of quail and butternut squash strewn throughout. Nor the lamb ravioli, filled tonight with lamb's tongue and brain, served in a thick tomato sauce, and which might have been our favorite dish of the night. 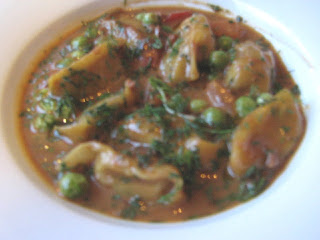 Might have, had it not been for our final savory course, the spit-roasted lamb (we spotted the lamb roasting as soon as we walked to our seats), encased in a crispy package floating atop it's dill-feta-yogurt sauce without a care in the world... 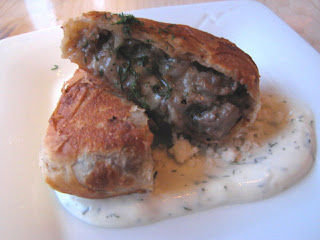 As dinner came to a close, and we wrestled with the decision as to whether to have dessert or not (3 baskets of bread'll do that to you, but we did have some ice cream/gelato and a small portion of something chocolate-y), SE and I both agreed that we need to return to Zaytinya - soon. Because - there was a lot we didn't get to try.
Because - the price is right...cocktails, a couple glasses of wine and a beer along with all that food was $125.
Because - there are great specials offered at happy hour.
Because - the service is warm, friendly and proper.

And because - there's nothing quite like this in NYC. Thanks for having Jose, DC.