Global Warming is a Scam...Well, Maybe Not

I know, I know. I complain a lot about the heat (just look at my last post). But you gotta admit, this summer has been unusually, ahem, warm. Actually, this year has been one of, if not the, hottest years on record, and not just in New York or DC. Globally, if you must know. Yep - the average worldwide temperature in 2010 has been about 1.25 degrees hotter than ever before. Oceans, too. But, you know, there's no "global warming." After all, didn't it snow last winter? A lot. So, how can there be global warming? Well, listen up, and take your heads out of your asses, all you naysayers. Let's change the term from global warming to what it really is and that's climate change. It's happening. Won't affect any of us in our lifetimes, but come back in a couple of hundred years and check out the shitshow. If you don't believe me - here's the science.

Okay, I usually don't rant and rave about stuff like this - Significant Eater is so much better at that than me. I'd rather just be pissed off about other things, like how annoying it is to cook during the summer. Well, I suppose it's not all that bad if you have a nice house that's all air conditioned. But in a tiny NYC or DC apartment, it's really tough.

But, lest you think I'm always cranky, I have a confession. I do cook, but only a wee bit. I mean, I love the stuff that's available in the summer (and only in the summer) at my farmer's markets. There is beautiful corn. Great green beans. Tomatoes that taste like...tomatoes. And on and on. I make breakfast every single day because if you didn't know this about me, I hardly ever go out for breakfast. Brunch is, in my opinion, one of the biggest scams in the world. So, the one meal I cook every day is breakfast. Here's what I made for SE and me this morning... 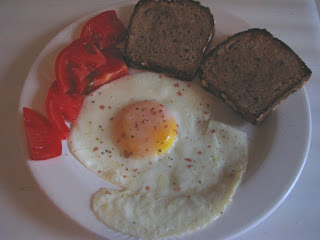 Nice, right. Farmer's market tomatoes and eggs along with some delicious toasted 7-grain bread from Pain d'Avignon, a great bakery that has a location at the Essex St. Market and often sells its wares at the Hester St. Fair as well as the New Amsterdam Market.

At the farmer's market last week, the bi-color corn was gorgeous... 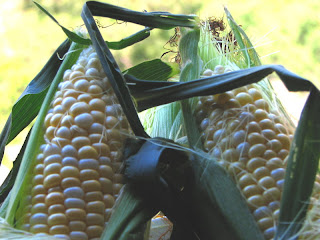 The yellow wax and green string beans were beautiful too. Kirby's were in abundance. So, continuing with my no cooking trend, I decided to make a batch of pickled vegetables. After all, quick pickles (I like Chris Schlesinger's book about quick pickles, btw) only involve bringing the brining liquid to a boil and then pouring it over the veggies. And that's what I did with my haul from the market. A couple of days later, a plate of pickles accompanied a nice sandwich, and if you've never had pickled corn, you don't know what your missing. And you won't even have to turn on the stove. 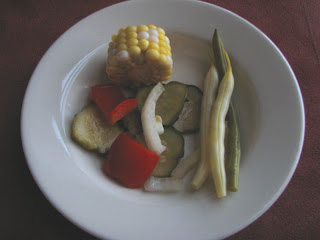