In any event, in a mere six months, Keith has transformed what was once Pulino's, an Italian pizzeria slash trattoria into Cherche Midi, a French, well, bistro slash brasserie, I guess. In early visits, I liked Pulino's food; there was some cool stuff on that menu - I particularly remember a dish with smoked sable, a guilty pleasure of mine.  What I didn't like about Pulino's was the corner; to be exact, the southwest corner of Bowery and Houston Streets, in my mind one of the most heinous corners in Manhattan on which to put a restaurant. As someone on a website I frequent, and where I started an argument about this particular corner noted, "there is no joy going to the corner of Bowery and Houston." Additionally, the place had windows that were thrown open to that corner; why exactly, I'll never know...my memory fails, but there may have even been cafe tables outside, which is great if you like eating at a bus stop.

Fast forward to now, and even though you can't change the corner, the windows are gone and once inside you'll barely know where you are; if your imagination works well, maybe you'll think you're on the right bank - although that might be pushing it. Suffice to say - it's a hell of a lot nicer inside now, though if you're sensitive to noise, it's as noisy as many of the McNally places, especially as the evening progresses.

Significant Eater and I had stopped in about two weeks ago for an after dinner drink and last night I made my way back, specifically to try the burger, which has been raved about in various articles, in blogs, etc.  So when I arrived early last night, I took a seat at the practically empty bar, and checked out the drink menu. 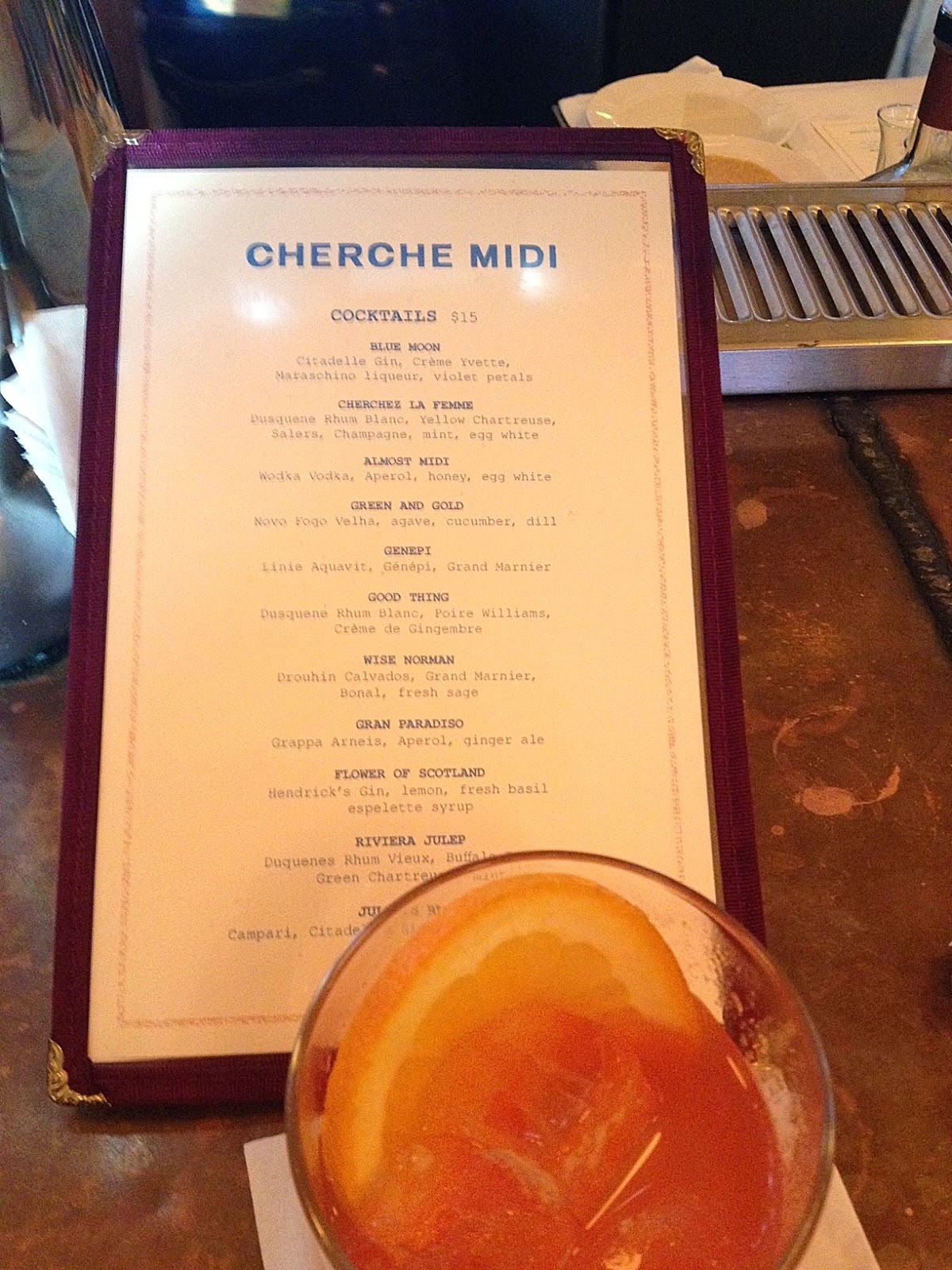 The head bartender just happens to be the bartender I've known for years from another McNally joint, Schiller's Liquor Bar, and he rightly steered me towards a Julia's Blush, a riff on a Jasmine (a drink I first had made for me by Kenta Goto at Pegu Club).  It's Campari heavy, with gin, lemon juice and agave taming the bitter - and it's delicious and perfect for a hot night.

It's also $15, as are all the cocktails, which in this day and age in NYC is not crazy, but once the price creeps up to $17, all bets are off. I enjoyed it as I decided what to have for my appetizer; thankfully, the menu is simple compared to the new style of menu. You know the ones -  with starters, small plates, middle sized plates, larger plates, in-between plates, pre-desserts, desserts, and on and on, until you end splitting like 7 things and paying twice as much as you used to.  Here, it's appetizers, entrees and sides - what a concept!

I decided on something cold for my appetizer, an heirloom tomato gazpacho with pickled shrimp... 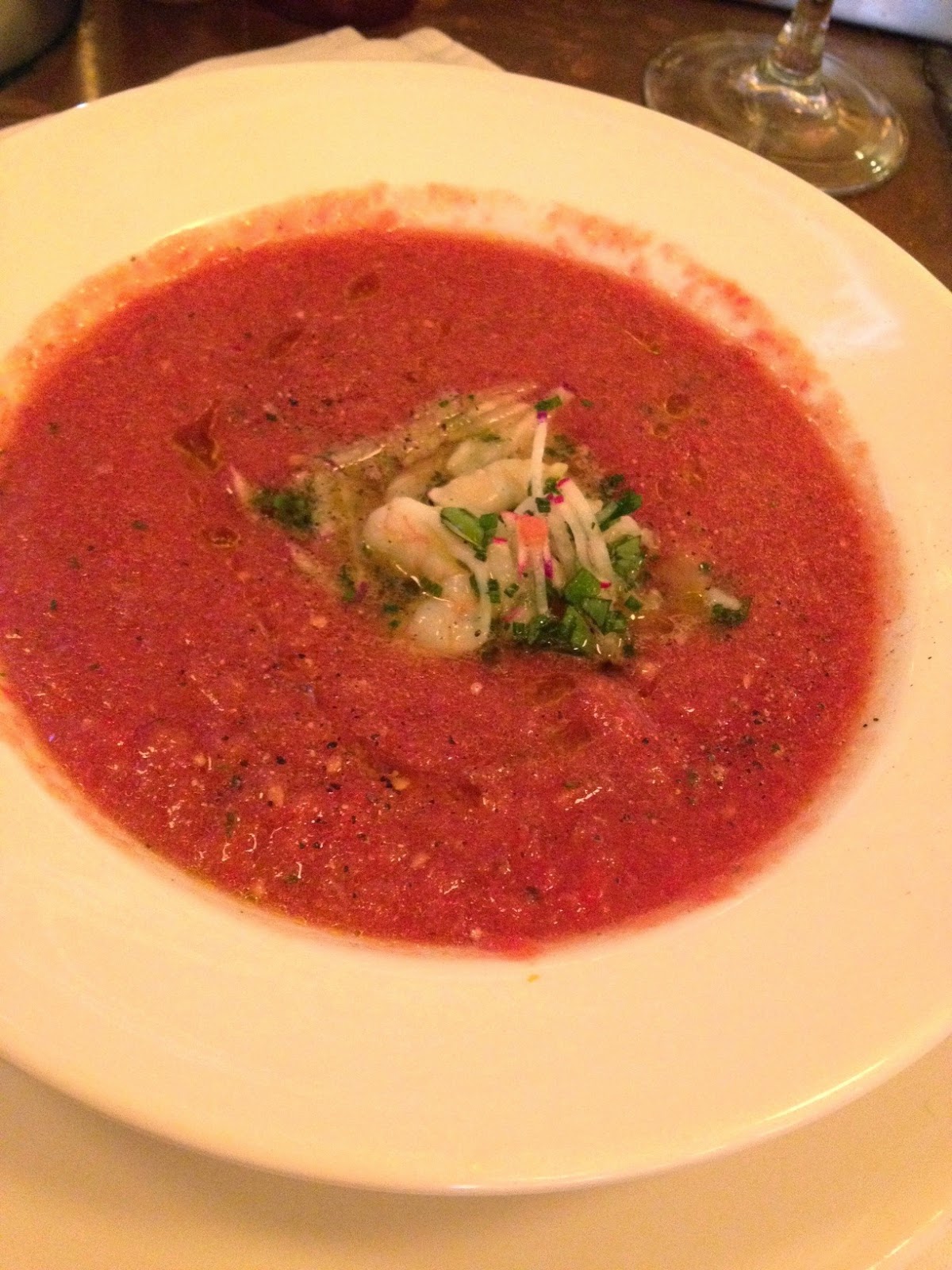 And it was quite good.  Thick and rich, not too smooth, with the pickled shrimp adding a nice, well, pickled note. For my entree, the burger.  A LaFreida burger (is there a freakin' burger that isn't LaFreida's?), it's allegedly made from dry-aged trimmings from the dry-aged prime rib, which is also on the menu, along with some short-rib, which isn't. It's topped with roasted mushrooms, bacon marmalade and aged gruyere, and I'm guessing the buns are made somewhere in the McNally world - like at Balthazar bakery. It comes with fries, lettuce, tomato, onion, pickle slices, and it looks like this... 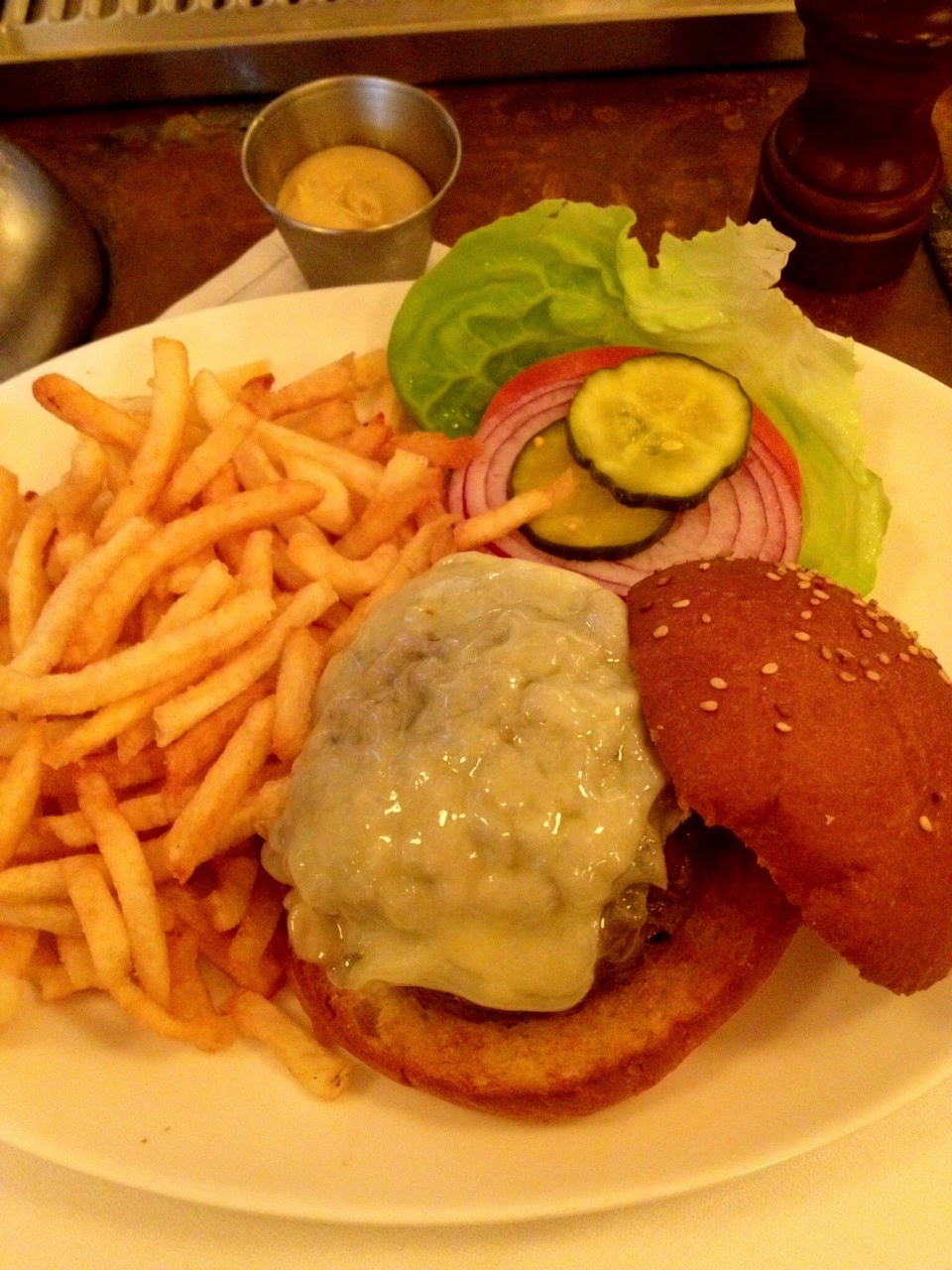 It's good.  It was cooked to perfection. It's really good, as a matter of fact, the dry-aged beef adding that cheesy funkiness I happen to like. If I have one complaint, it's that the bun may be a little too big for the burger, but it was toasted and held together beautifully, and you can't ask for much more than that. And the fries - still some of my favorite fries in the city. From Balthazar, to Minetta, to Schiller's - the fries are fine.  And just to pretend I might be in France - I dip 'em in mustard - try it, you might be surprised.

The tariff for the burger and fries - $21.  Not bad, when you consider that a side of fries is $9 on this menu. Same price as the Spotted Pig's and cheaper than Minetta Tavern's Black Label entry.

It'll be interesting to me to see if Cherche Midi has a long run. As I mentioned above, I felt that one of the main reasons for Pulino's closure was specifically the location.  But now the Bowery is home to a dozen or more restaurants, all on a stretch that was unimaginable a decade ago.  The crowd is different than Schiller's was, back when it was the lower east side's hottest spot and they could squeeze 8 models into a booth made for 4.  So it remains to be seen whether the crowds will continue to come (and it was crowded by the time I left last night), with all those other choices nearby.

Me - I'm heading back with Significant Eater soon.  The menu has lots to explore, and it's the kind of food we really like to eat. My guess? On our next visit, she's gonna want that burger too.