Oatmeal - Or, Eat Your Mush

Does anyone remember that great scene in a Little Rascals short, where the boys and girls would whisper to each other around the table? It went like this (thanks to IMDB for refreshing my memory):

Spanky: Don't drink the milk!
Cap's Wife: Why not?
Spanky: It's *spoiled*!
Cap's Wife: Spoiled nothing! You kids put that milk on your mush and eat it! Eeehh!

It turns out that Significant Eater and I have a difference of opinion when it comes to oatmeal for breakfast. I really like it, and she doesn't. But, and here's the kicker, she used to; over the last six months to a year, though, she's decided it just isn't her cup of tea (and has gone negative on bananas as well).

I've tried and tried - I serve the oats with only the best Grade B maple syrup (farmer's market, of course), brown sugar that comes from the Brooklyn Brewery (don't ask), delicious fruit both fresh and dried, nuts from Bazzini, whatever - she still turns up her nose (though, and don't tell her I said this, if it's the only thing on the table, she'll eat it). So now when I want oatmeal, I'll often make her something like toast with peanut butter and jelly or topped with butter and cheese...not bad, but not oatmeal.

A week or two ago, SE noticed an article in the NY Times food section, written by Mark Bittman and extolling the virtues of savory, whole grain breakfasts. Things like wheat berries with scallions and soy sauce, polenta "pizza" with pancetta and spinach - well, you get the picture. And on a video on the Times' web site, Bitty (as Gwyneth likes to refer to him) suggests substituting oatmeal for the wheat berries - aha, a eureka moment, I thought. Although, let's face it folks, we've all been eating savory breakfasts for a long time - after all, what is bacon and eggs if not savory? Anyway, back to my eureka moment... 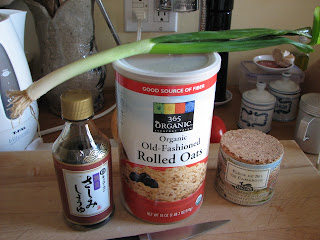 So there it is - oatmeal, scallions, soy, salt - everything a savory person could want. Cooked perfectly - man doesn't this look good? 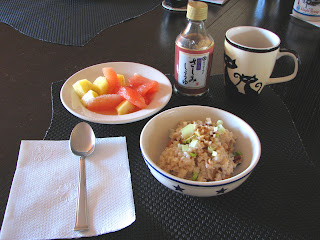 Well, guess what? She didn't like it one bit - even started to throw out suggestions like perhaps I should've made a little sauce, with soy, vinegar, ginger, etc. etc. Fuggetaboutit - no more oats for you. And chopping scallions in the morning makes the whole place stink to boot. As for me, I'll continue to make mine the way I like it - with cranberries, raisins and good old maple syrup. 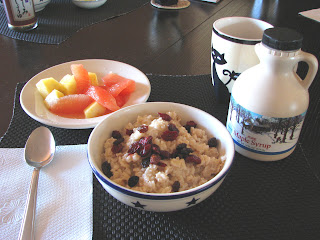 Significant Eater will just have to do with toast. And to Bitty - thanks a lot. Now go eat your mush.
Posted by Mitch Weinstein at 6:15:00 PM

Email ThisBlogThis!Share to TwitterShare to FacebookShare to Pinterest
Labels: Breakfast