Barbecuing In Manhattan - Well, How About Grilling?

Barbecuing, or at least the definition of barbecue that I use, is cooking food with low heat and wood smoke for a long time - low and slow, as they say. As a matter of fact, the National Barbecue Association says the following:

Many people think good barbecue is from the sauce you put on the meat – wrong! Real barbecue is meat that is cooked with indirect heat and smoke (USDA Definition). Not boiled in water or cooked on your normal backyard grill that uses direct heat. They also say nothing about sauce...three essential elements of barbecue are: Good meat, the process of slow cooking at a low temperature, and the fuel used for heat and flavor.

Probably the reason you don't hear about home barbecuing in Manhattan is that it takes not only time, but the ability to produce wood smoke for hours and hours, which generally aggravates at least a few neighbors. There are all sorts of Fire Department rules about charcoal as well, making the whole subject of barbecue a little troubling - though I do have a friend or two who happen to have backyard spaces, where some ninja barbecuing takes place.

Enter the grill, and that cousin of barbecuing, grilling. Since it's a much shorter process, there's less time to aggravate the neighbors. Electric grills are actually legal in Manhattan - so even though cooking on an electric grill is akin to cooking on a grill pan on a stove, if you've got an outdoor space and a grill, well at least you can pretend. You can even get some smoke flavor going too, but that's for another conversation. So on Monday, when some friends invited us up to their terrace for a "barbecue," we of course jumped at the opportunity, since I miss grilling.

Since I'm the "chef," I get to do most of the cooking on the grill. And seriously, what's not to like about grilling when the view looks like this...this is looking uptown from high up on the lower east side...and even though it was a bit hazy, the view is still awesome... 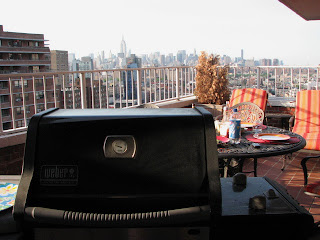 Since it was Memorial Day, and since it was a last minute idea, we didn't make anything fancy. I wanted to go grab some steaks at my butcher Jeffrey, in the Essex St. Market, but the market was closed. So I was resigned to shopping at our local grocery, where I picked up hot dogs, ground turkey and chicken breasts, (all kosher, at least), and all which can be grilled quickly. While the dogs and the chicken were tasty, the turkey burgers were not - the Empire turkey is ground to such a paste that burgers made from it have the texture of, well, lousy ground turkey. Really, it's a must to avoid.

We grilled corn and asparagus, made macaroni salad and coleslaw, snacked on guacamole, salsa and chips, drank beer and rose wine, and finished with homemade sorbets and banana chocolate chip bread...all delicious and not bad for an impromptu "barbecue" high up on the 18th floor! 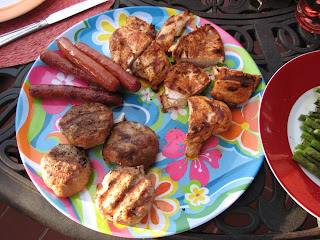