In a strange, simple twist of fate, Significant Eater and I had lunch yesterday with two friends who were in the city for their son's before-going-to-college orientation. And when I asked them where they wanted to go, well...whaddya know, they wanted Katz's.

Now, I say a simple twist of fate, because it just so happens that the world famous curmudgeon and restaurant critic extraordinaire Alan Richman, happened to blog about Katz's yesterday, the same day we went for lunch! Let me say this - and as anyone who knows me can tell you, I'm cranky. I'm not cooking right now because it's so freakin' hot...that's how cranky I am. But Richman? Holy shit. I'm an amateur next to him.

You see, Richman's blog basically disses on Katz's. In a big way. And even though he makes the disclaimer that there really are only 3 or 4 things to order at Katz's, he goes through the motions of ordering a lot of stuff that no sane person orders there, and hates it all. Duh. When I say "no sane person," that means that anyone who knows Katz's (and Richman knows Katz's) knows that you order a pastrami sandwich, a hot dog, a knockwurst or a knoblewurst. For accuracy's sake, he likes the salami too - but, in all my years going to Katz's, I've never had a salami sandwich...I may have to try one soon.

Back to the pastrami. Which is my #1 thing to order. It's really good. It comes piled high on (less than great) rye bread and is enough to share...especially when a few hot dogs are on the bill. BTW, the potato knish (Gabila's - I saw the box), which I ordered in order to compare with the one I had last week, was nowhere near as good as that one at Yonah Schimmel's.

For those that don't know, when you step up to the front of the line, tell your counterman you want a pastrami sandwich - juicy (or fatty) - on rye...while you're placing a dollar or two in his tip cup. My guy walked over to the steamer, fished around, found one he liked and cut me off a few end pieces to taste - and when I dribbled my approval, proceeded to slice a heap of that heavenly meat to make my sandwich. Ask nicely, and you're liable to get a damn good pickle plate too - as Richman warmly says:

I won’t argue. In fact, I’ll go him one better and say that the mustard is terrific, as good as deli mustard gets, and the pickles are pretty good.

And that's what you want - juicy pastrami on rye with mustard. And a pickle plate. Order that, and Katz's is still damn good...(go ahead and click on that picture to see just what I mean)... 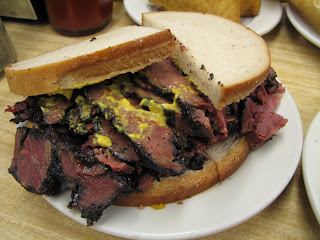 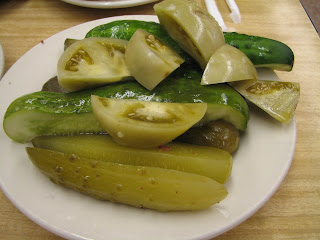 Email ThisBlogThis!Share to TwitterShare to FacebookShare to Pinterest
Labels: lower east side