A Weekend in Italy

Now that I've gotten your attention, I might wish we had spent the weekend in Italy. Our friends Judith & Jeff have a home in a little hilltop village in Umbria, where they spend a good half the year at least. Every time I read Jude's blog, Aroma Cucina, I remember the great time Significant Eater and I had while visiting them in Montone; the food, the hospitality, the outrageous (to this lower east sider) location...all of it.

However, if you can't be in Italy, maybe you're lucky enough to have friends whom you might join for a great meal right here - and that's what we did this past weekend, heading out to Brooklyn to have dinner with friends - who invited us to their backyard, to their Weber and to cook like a bunch of Italians.

If you didn't know, I have grill/bbq envy. I admit it. Our 15th floor apartment isn't set up for grilling. And even though some friends and neighbors have a balcony and a grill...I still need charcoal every now and then. Hey, I lived in Cali for 18 years. I had 3 grills in my backyard - none of them used propane or butane or anything like that. They all used charcoal and wood and that's the way to grill (and to bbq, too), in my humble opinion.

So...I needed Brooklyn. And to pretend we were in Italy. Surrounded by apple trees, roses, herbs growing...and that Weber! A trip to the farmer's market by my buddy that morning brought some Long Island oysters - and a quicker trip on a fiery Weber for those oysters, along with a splash of lemon or a bit of house made mignonette - could there be a better starter? Goes well with a French Pearl, too. 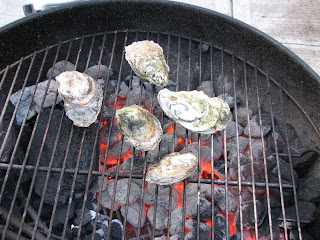 Next up, the farmer's market brought in some fresh shelling peas, which were simply heated up with a bit of extra virgin, and then tossed with orecchiette, some fresh ricotta I had brought over the bridge from Alleva Dairy, mint from the garden, Parmigiano-Reggiano, lots of cracked pepper and the pasta cooking water. Simple, and we could have been in Umbria. See for yourself... 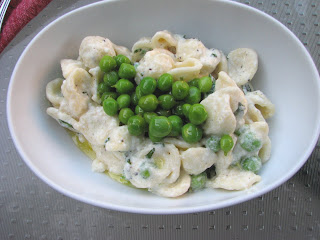 For our secondi, a big, prime T-Bone went onto the Weber, now glowing with mesquite and apple wood. So, make that Bistecca Fiorentina, which is the famous grilled beef of Florence and Tuscany, from a Chianina cattle, grilled over wood or charcoal, and usually anointed with extra virgin olive oil, salt & pepper. In addition to the T-Bone, a couple of prime strip steaks were sacrificed as well. It was all carved up and served with some foil grilled packets of market potatoes and spring onions. If you closed your eyes, and ignored the planes on final approach to JFK, you could easily be in Umbria. 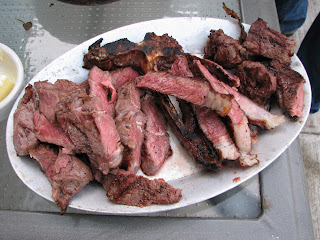 Since we didn't get to Italy this past weekend, here's a pic I took in Montone when we were there. I may even do a post about that trip someday - when I'm imagining a weekend away. 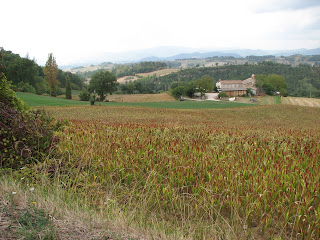