The Whole Globe - Artichoke, That Is

L'artichaut. Carciofo. Alcachofa. Anginare. No matter the language, the artichoke is a vegetable that has been enjoyed by Mediterranean cultures for a long, long time.

I developed a love for the thistle during my years living in California. I had never had one before moving there. Cali produces about 99% of the commercial crop in this country (Texas is trying) - though I do see artichokes from Jersey at the farmer's market here in NYC come fall. In California, I can remember getting them cheaply during the season (actually, they're pretty much available year-round, but the best are in the spring, followed by the fall crop) - a couple of bucks for a 2 lb. bag of baby artichokes (not really babies, just from the lower parts of the plant), and sometimes 3 for $1 for the big ones. Here in New York, not so cheap. So, imagine my surprise when I stopped in at the Essex St. Market the other day, and one of the produce stands was selling some nice sized globes at that price - I took home 9 of 'em for a grand total of $3. Not bad looking ones, I might add... 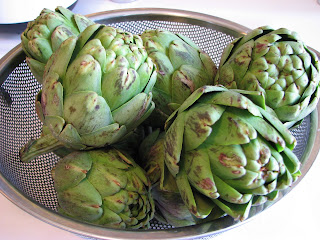 A couple of tips. I learned a long time ago to beware of the tops of the leaves (bracts, really) because they will jab you in the finger and you will curse - I gua-ran-tee it. Loudly. Those fuckers are sharp. Second, they should feel heavy in the hand - as should most of the fruit and vegetables you buy - that way you know it's fairly fresh and not dried out...after all, they have spent at least 4 or 5 days coming from Castroville/Watsonville - pretty much the artichoke capital of the US - at least that's what they want you to believe. To prove it, this year they held the 50th anniversary of the Castroville Artichoke festival, and I'm sure they were serving up tons of fried artichoke hearts.

Oh, and third - the artichokes will talk back to you if they're fresh. Pick one up and give it a bit of a squeeze - it should squeak. If it doesn't, put it back - it's old and likely to be fairly flavorless. Tightly bunched bracts are a good sign, and a little bit of browning on the leaves isn't bad - it just means that the artichokes have been kissed by a bit of frost. Old-timers will tell you that makes them taste even better.

Now, I'm not going to go into the whole cleaning and prepping of the bud - if you've used them before, you know what a royal pain in the ass that is. By the way, there's nothing more fun than being handed a case of artichokes and being told to "prep 'em," but that's a topic for another post, I'm pretty sure. If you're trying them for the first time, do an internet search and lots of instructive sites will be able to help you better than I can. Better still, buy a book or two - I happen to like and have this one: The California Artichoke Cookbook: From the California Artichoke Advisory Board, and it's easy enough to find.

So, what to make? Well, there's a great Italian tradition of slicing the hearts very thinly and serving them raw in a salad - dressed simply with good olive oil, lemon juice, salt and pepper and you can't go wrong.

Deep-frying them whole gives you Carciofi alla giudia, but not in my apartment kitchen, thank you. There's also Carciofi alla romana, which are braised and almost as delicious as the fried ones.

For Significant Eater and me, however, I just wanted something plain and simple to go along with the pasta we had as our main course. So, first I cleaned the globes down to their hearts (don't throw away the stems either - peel them and they're as tasty as the heart) and cut them in 1/2 or into 1/4 s. Next, I sauteed them, along with 1/2 an onion and a couple of cloves of garlic in a good 1/4 cup of olive oil to brown them a bit - when they started to take on some color, I deglazed the pan with 1/2 cup of dry white wine and when that boiled off, added 1/2 cup of chicken stock along with a couple of sprigs of thyme, covered the whole thing and allowed it to simmer for 15 - 20 minutes until tender. Dressed with a bit more extra virgin and a handful of chopped parsley - and who needs Schwarzenegger. Buon appetito! 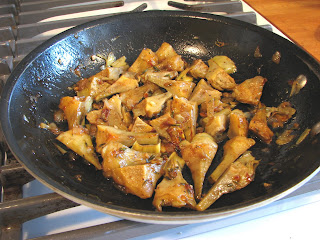