Ahhh, the dumpling dilemma - especially tricky here in New York City, specifically on the lower east side and even more specifically, in Chinatown, Jack. Because that's where they, "they" being the dumplings of the 5 for $1 variety, are found practically everywhere you look. And let's call them the 5 for $1 variety, even though some of them now cost more at 4 for $1. You see, even the dumpling people realize that raising the price isn't the smartest marketing move, so instead of raising the price, they charge you the same $1, and they give you less...Ogilvey and Mather has nothing on these marketeers.

As an aside, the other day I was shopping in DC with Significant Eater - Harris Teeter, for those on a need to know basis. Tropicana orange juice was on sale for $2.99 for a half gallon, not a bad price for juice that comes from oranges grown so far and wide, so I picked up a carton to get a closer look - and there it was. Yes, that half gallon had somehow mysteriously shrunk to a mere 60 ounces, and as any (or at least my) self-respecting high-school math, science or even English teacher would've told you, that ain't no half gallon. They want you to believe it's a half gallon, but you can't bullshit a bullshitter, as they say.

Back to the dumplings. Since there are a fair number of these dumpling places on the
lower-east-China-side, I needed to narrow my search. The dumplings I want to check out are the pan-fried variety type, though I usually order something to go along with them because after all, who can only spend $1 for lunch? At some point, I'd love to do a side-by-side of the cook-at-home varieties that many of these places offer - they are usually sold in bags of 50 for something like $8 (!), making them something like 16 cents a piece, or 6.25 for $1 - and take THAT, high-school math.

I decided to narrow my search even more, by doing a street by street comparison. So the other day I took off, camera in hand and traversed Eldridge Street from bottom to top, simply because Eldridge may well be an apocryphal street in dumpling lore...and there's a really cool Jewish synagogue on it too.

The first place you come to on Eldridge is called Prosperity Dumpling, at No. 46... 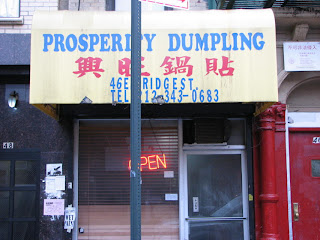 Prosperity's dumplings are held in high esteem by many dumpling lovers, and rightfully so. They strike that perfect balance between crispy bottoms and a soft enclosure, with plenty of porky chive (chivey pork?) flavor. The skin is nice and thin, and not gummy like some of them get...it can barely contain the righteous amount of filling. Take a look-see... 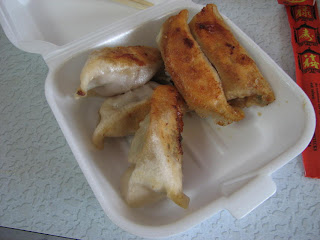 Mmmmm, those are some damn good dumplings and guess what? Still 5 for $1! How do they do it, folks? By the way, I also ordered one of their sandwiches - yes, the dumpling shops usually sell some sort of sandwich, which is made on a thick scallion pancake that has been split open and stuffed with - well, you don't necessarily want to know what it's stuffed with. When you get one on a pancake that is hot and steamy, they're really good, and Prosperity is no slouch in this department either. They come in a number of varieties as indicated on the menu, but not really; every time I've been in they only have beef, so that's what I have - basically dried or dessicated beef with a few shredded carrots, cilantro and maybe a squirt of hoisin and they're not half bad...expensive, though, at $1.50. 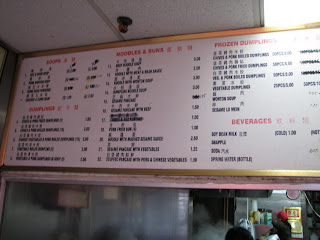 One final money shot - check out the activity in the back room of Prosperity - there's some dumpling making going on, with no less than 4 people cranking 'em out. 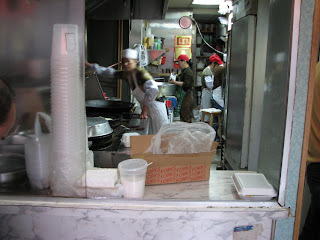 Waddling out the door and heading north, you'll come across this shop, with the rather unglamorous (or maybe it really IS glamorous, I dunno) name of Hua Du Dumpling Shop Inc. 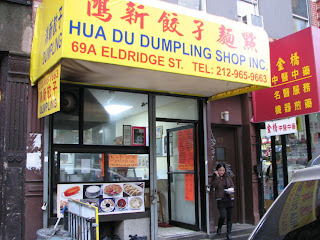 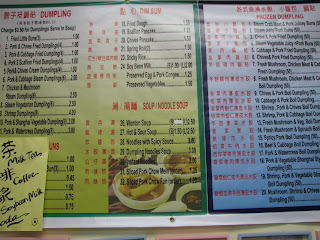 Now, the first thing I noticed when I walked in was that the dumplings (5 for $1) were sitting in a steam table pan - and that's not a good sign. Pan-fried dumplings are at their best when they come right out of the wok/pan/whatever it is that they're pan-fried in. These weren't. That, along with a total inability to communicate in any way, shape or form, and the fact that there really didn't seem to be any customers for the cooked-on-premises dumplings led me to turn around and walk away without even trying them. I'll be back in order to try out the frozen product at home, but for now I continued my trek northward,

For many, the Dumpling House on Eldridge is really where it all started. It has been around for a number of years, and was always in the top tier of 5 for $1's. They started getting written up in guidebooks and in tourbooks and then all hell broke loose. There was an expansion to 14th St. (maybe a cousin or some other family member). They were able to take over the storefront next door on Eldridge St. a year or two ago and renovated and reopened under the name of Vanessa's Dumpling House...at 118 A Eldridge, and here it is... 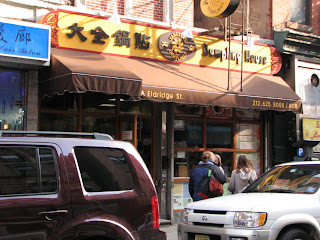 Now, don't get me wrong, for I love a successful business person as much as the next guy. What I don't love is the thundering hordes. It makes for a not-so-good experience in my mind. And sometimes the wait is unbearable and the product is less than stellar. Oh, I'll go there sometimes (it is practically around the corner from our apartment, after all), but it has to be off hours. Otherwise, it looks like this... 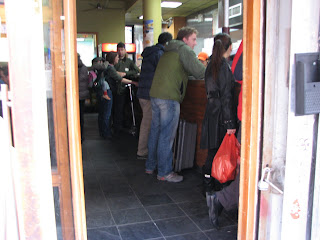 Next up for dumplings, the double of Henry and Madison Streets - should be some interesting finds down there.