First, lemme get this out of the way: I hate crowds. I know, I know...it seems kind of silly that Significant Eater and I live in NYC if I hate crowds so much. Maybe I'm just cranky and think that I hate crowds; or maybe I'm just much more tolerant than I think I am and I really like crowds? Yeah, right.

So, what's with all this stuff about crowds? Well, this past weekend brought us the 10th anniversary of the Big Apple Barbecue Block Party (hereinafter known as the BABBQBP, because that's so much easier to type). This barbecue festival, which brings together close to 20 BBQ pitmasters from around the country, helps to raise funds for the Madison Square Park Conservancy, which is, imo, a great cause.


It also brings, you guessed it, the crowds. Remember - 10 years ago the BABBQBP was a quiet little festival...you could literally wait 5 minutes and you'd be sampling some fine 'cue. And then, like everything that's happened to anything food-ish over the past 10 years, the sucker exploded like Guy Fieri's ego. It's money, if you get my drift.

I think we've attended every BABBQBP since its inception and it gets crazier and crowded-er every year. Of course, the marketing geniuses figured out that they could sell a "Fast Pass," which allows the holder to bypass the lines and theoretically get served more quickly. But they sell so many of the damn "fast passes" that the lines for fast pass holders end up being just as long as the lines for the plebes...and basically it's a sucker's game.

OK - now that I've gotten most of my gripes out of the way, I do have to say we tasted some mighty fine 'cue this year. One of our new favorites was the whole hog bar-b-que from Scott's Bar-B-Que in Henderson, South Carolina; the smoky pig served up with a side of crispy skin and some tasty sauce. As this picture proves, BBQ ain't easy... 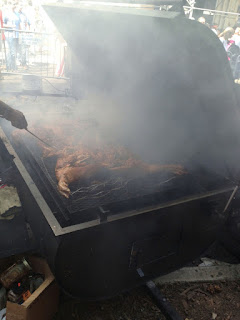 We also took a liking to the smoked sausage from Jim 'N Nick's Bar-B-Q, a chain based out of Birmingham, Alabama...their spicy hot link was crisp, juicy and absolutely delicious, served up with a side of everyone's favorite...pimento cheese and Saltines... 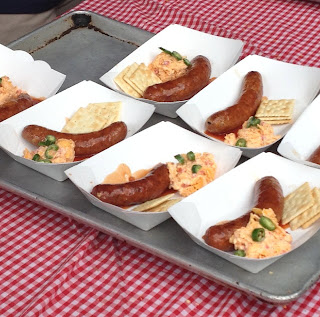 On the rib end of things, we bypassed our usual favorite, Memphis Championship Barbecue, and instead tried the St. Louis style (a real sparerib, not a wimpy baby-back) ribs from Checkered Pig, in Danville, Virginia, a worthy endeavor even though I like my ribs sans sauce.

In addition to the 'cue, there's music, and it just so happened that 2 performers whom I've actually paid money to see were performing for free on the festival's main stage. On Saturday, we got to see and hear Jon Langford... 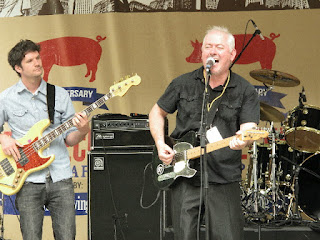 And on Sunday, Alejandro Escovedo closed out the party... 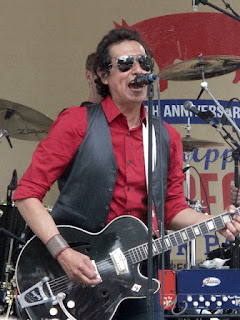 To prove that I'm not just a grump, Madison Square Park is beautiful and its location offers stupendous views of a few iconic NYC buildings. For example, there's this... 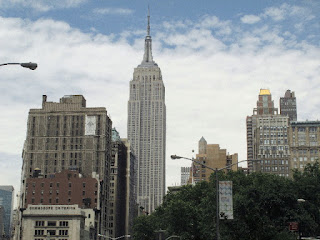 And perhaps my favorite building in this whole city... 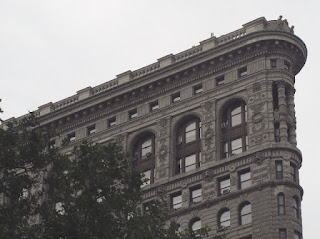 So come to think of it (other than the crowds), it's not that bad. I mean, sure - waiting on endless lines can be a drag. And squeezing by sweaty mooks gnawing on ribs isn't that much fun. But hey, it's NYC after all - deal with it...just like I did and will continue to do. See y'all next year at the BABBQBP - I hear it's the 11th anniversary.
Posted by Mitch Weinstein at 10:25:00 AM 1 comment: