It'd been a while since we'd been to Blue Smoke, and even longer since we'd been to the original, flagship, first, whatever, Blue Smoke, on 27th Street, in the Flatiron neighborhood.  I think our last visit was to the Blue Smoke located in Battery Park City, and that was some time ago. But this past weekend, we attended a birthday party for one of Significant Eater's cousins, which was thrown at Blue Smoke #1; a nice, small party, 30-40 people, in the middle of a busy Saturday afternoon.

If you don't know Blue Smoke, suffice to say it was among the first of the big barbecue restaurants in NYC (and yeah, Virgil's, in Times Square, predated it). There were smaller operators back in the day - I recall a great place out in Long Island  City, called Pearson's Texas BBQ, but bbq had always been but a blip on the NYC restaurant radar.  Enter Danny Meyer, Union Square Hospitality Group, and The Big Apple BBQ Block Party, which brings BBQ specialists from all over the country to Madison Square Park and its environs every June - this year will be the 13th year for the block party - it started the same year that Blue Smoke opened.

In its earliest days, Blue Smoke was uneven. They had to learn how to use the smokers, compounded with the scrubbers, which were a necessary evil due to NYC's, well, smoke and fire laws. This isn't exactly bbqing on a Weber in your backyard - something I love to do, even though I lack both a Weber and a backyard. But every once in a while at Blue Smoke, you'd get a great rib, or a hunk of wonderful smoked pork, and all would be good with the world.

Of course, once a place is successful in NYC, many places open offering similar stuff. Bbq became a "trend," and places popped up everywhere. Some are quite good; some, not so much. Pitmasters come and go - you know the story. As a matter of fact, a while ago Blue Smoke's original pitmaster, partner and co-founder of the BBQ Block Party, Kenny Callaghan, left the organization.

So where would they head? Well, from the food we ate at the birthday party, it appears they're headed in a fine direction.  The new Executive Chef is Jean-Paul Bourgeois, and that's a great name, no? The menu has been condensed a bit - there used to be a bunch of different rib styles...they're no longer there, and that's just fine with me. Because most everything we got to taste made us think we have to come back more often.

Roasted oysters were delicious, not too much topping, allowing the flavor of the oyster to shine through, touched by smoke. On the half shell, these same oysters were well-shucked, fresh and briny. I've always had a soft-spot for the chipotle chicken wings at Blue Smoke (well, wings anywhere) - these are still great. I tasted the kale salad, but don't know why. On the other hand, the gem lettuce and citrus salad was fine, as were the cornbread, deviled eggs and assorted sides like brussels sprouts slaw and butter beans with bacon.

Of course, the star of the show is 'cue, and based on the 'cue Sig Eater and I tried on our recent trip to Nashville, I'll take Blue Smoke's any day. I'm not a huge fan of bbq chicken - I've never had one that was transcendent. And maybe the brisket here could use a touch more smoke, but I'll leave that to the Texas 'cue experts. All I know is that the rack of ribs that was placed on our end of the table was just great. Smoky, tender and just chewy enough from the right amount of time spent hanging out with smoke and heat, these ribs could hold their own with the best I've eaten. And for this alone, we 'll be heading back to Blue Smoke soon...or at least as soon as we need our next bbq fix. 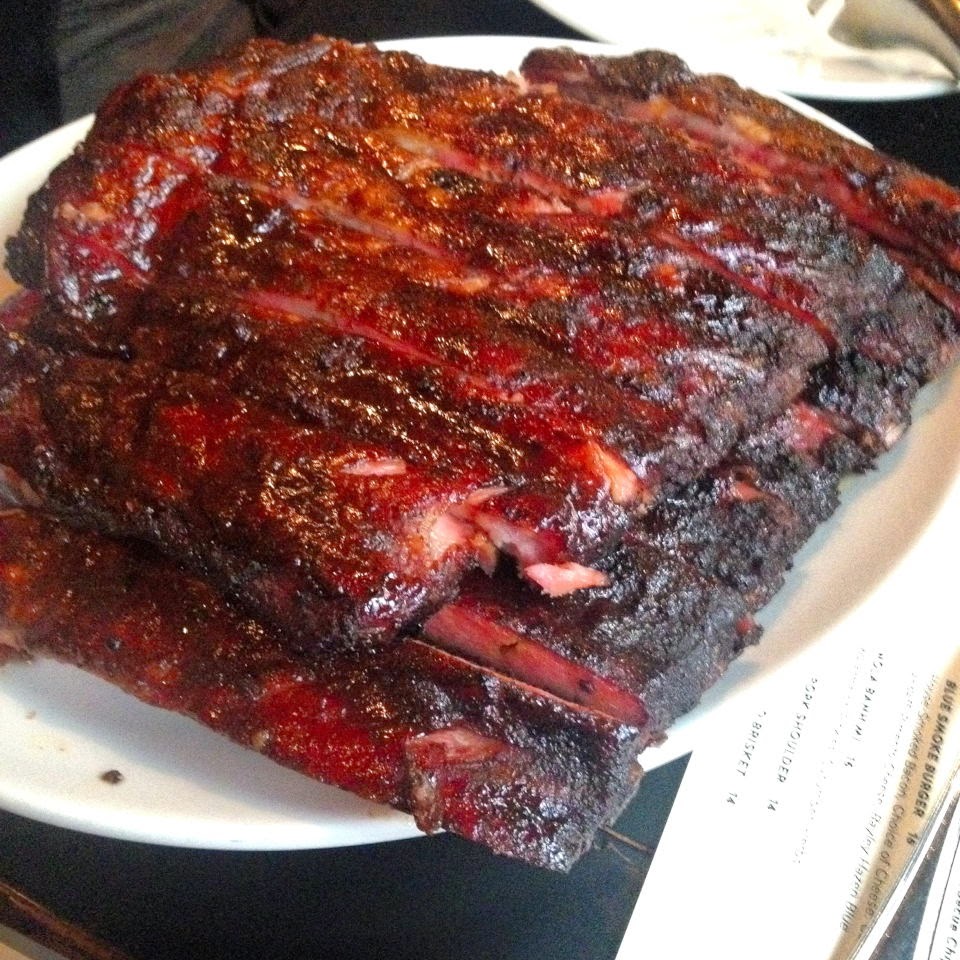 Man With a Mission, Take 2

I was gonna make this pun about a man (Chef Danny Bowien) with a mission, figuring I could tie it to the Elvis Costello song Everyday I Write the Book. Of course you know that song - it has a line which goes: "I'm a man with a mission, in 2 or 3 editions..."

But googling that phrase, it turns out that not only is there a band named Man With a Mission, but everyone from Van Halen to Hall & Oates has used that damn lyric, in one way, shape or form.

So no pun. And minimal backstory. Because if you don't know the backstory about Mission Chinese Food New York, you've either never read Eater (good for you!) or any of a million other publications which talk food in NYC, or you just don't give a shit (good for you again, I guess).

Last night, Significant Eater and I ate at the new Mission Chinese Food New York, for the second time since its opening in late December, and last night we had a friend with us, so we were able to sample even more of the menu.

Now, I come to the new MCFNY with a bit of a chip on my shoulder, since its location was the home to a restaurant I really liked (Rosette), with a chef I really like (Nick Curtin). Nick's now cooking in Copenhagen, and Rosette's now just a memory, and I'm not saying a word about that lyric.

I'd rather just remember the delicious food 3 of us consumed last night, and 2 of us had consumed 2 weeks earlier. Cause delicious it was - from a redefined classic or two originally served on Orchard St., to a lamb riblet special that was just great...even though it looked like a Cantonese fried fish when it was brought over to the table.  Instead, it's a portion of rib that contains the chine bone,  and instead of using it for stock, it's braised, roasted, and then deep fried; served with a freshly baked, smoky and puffy flat bread from the wood-burning oven (passed down from Rosette), the idea is to pull off a chunk of lamb, wrap it in the bread, and slather it with a tzatziki like sauce. And then go - holy shit, lamb gyros!

Kung Pao Pastrami (one of those redefined classics) is now stir-fried with home fried potatoes as the starch (did it have rice cakes before? I don't remember); potatoes work, and remind me that pastrami and eggs were a great diner staple way back when - and they were always served with home fries. Squid-ink peanut noodles are dense, chewy and funky. There are oat noodles and wheat noodles on offer as well, but since we'd all had oatmeal for breakfast, we went with the more dinner-like pasta. Turnip cakes? I don't like turnip cakes - but for some reason - I liked these. We repeated the green papaya salad, because its vinegary zip is a perfect foil for these rich, spicy flavors.

So, you got any problems? Yeah, of course I do. There's absolutely no coursing of the order, which the kitchen "likes to get all at once." And evidently they like to send the order out "all at once." So the juggling we had to do at our table was a bit comical at times, since drink glasses, water glasses, plates, and dishes loaded down with food all don't fit on a 24" square table with 3 people sitting at it. I think they can do better with this. The cocktails I've tried don't move me, but that could be because I'm a cocktail snob. I love ciders, so I'd like to see a few more American ciders, those which aren't sugar bombs, on the list.

But I've got solutions to all this.  Right next door is the 169 Bar, where a cheap drink can be had beforehand. And I'll only order 2 or 3 dishes from now on; I figure if I'm still hungry, they'll let me order some more...it's still a restaurant, after all. And since it's right down the street from us, I greedily hope (unlike its short-lived predecessor) it's here for a long time.
Posted by Mitch Weinstein at 11:55:00 AM 3 comments: