When It's Hot, You Gotta Wing It 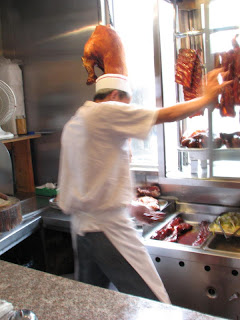 Yesterday was a rare full Friday that Significant Eater and I got to spend together in NYC. I had been in DC earlier in the week, and because it was about 1,000 degrees there, I decided to drive us both back to NY Thursday night, because, you know, it's so much cooler in Manhattan.

I don't know if I've mentioned that I'm really cranky in the heat...oh yeah, I have...but I am. And I cook much less in the summer, because...well, you know why. Anyway, we decided to take a walk for some lunch, and as soon as we hit the street, I said that I was mostly interested in the coolest, best air-conditioned place we could find...food secondary to cool and a not-too-long walk to get there either. That's when Sig Eater, most likely tired of listening to me complain about how friggin' hot it was, mustering up all of her insouciance, said: "How About Wing Shoon?"

Wing Shoon Seafood Restaurant is the "Chinese place" on the corner of East Broadway and Rutgers St. At one time in its glorious past, it was a famous kosher restaurant called The Garden Cafeteria, and many of the movers and shakers of the lower east side orthodox community used to dine there. It had a built-in clientele of writers and various other newspaper people; in addition to being a block from our front door, it's right up the street from the Forward Building, the long-time home of the once-daily Yiddish language newspaper called, strangely enough, The Daily Forward.

So here's a great pic of the Garden taken back in 1973 by the photographer Bruce Davidson, who often chronicled life on the lower east side with his wonderful photos. Now it's Wing Shoon - a place where I sometimes grab roast pork or roast duck over rice and bring it home for lunch. For about $5. On a "normal" day, we'd much rather walk over to Great NY Noodletown for a steaming bowl of shrimp won-tons, or maybe to Cong Ly on Hester Street, for a bowl of pho. But on this soupy day, Wing Shoon it was.

And you know what? In addition to the various $5 lunch specials of roasted things over rice, or stir-fries over rice (SE's favorite is the spicy ma-po tofu, fyi), Wing Shoon also does a traditional dim sum lunch, and as far as Manhattan Chinatown dim sum goes, it's not all that bad. Carts and all, but without the craziness of some of the vast dim sum parlors in Chinatown, where you have to act like you're an NY Jets linebacker just to get a dumpling.

So, in addition to our special lunch plates, we ordered a couple of old faves when a cart wheeled by - har gow and pai gwat. The shrimp dumplings were just fine, with a nice delicate wrapper (which was probably even better when it was fresh out of the kitchen) and the pai gwat (basically, spareribs braised with black beans) was delicious too... 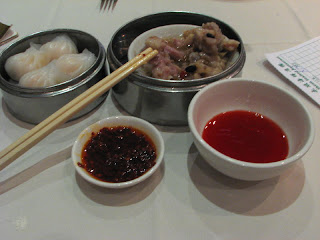 The roast pig over rice comes in a huge portion (share it), the skin all crisp and crackling, just like it should be; you all know it's served at room temperature or at least served at hanging in the window temperature, after it's taken off the hook and chopped up by the guy in the picture at the top. Here's the plate... 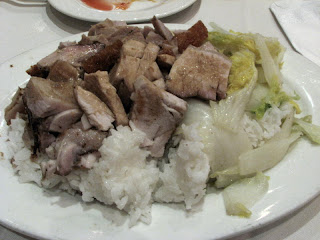 While Isaac Singer, one of the aforementioned Daily Forward's most famous writers (he even won the Nobel Prize in 1978), might be rolling over in his grave knowing that a good Jewish couple like SE and me were eating pork and shrimp instead of blintzes and sour cream (and really, are there two cultures who harden your arteries any more than the Chinese and the Jews?), it turns out that Wing Shoon may, after all, be a pretty good neighborhood find. For dim sum and the lunch specials, certainly. Or when they have the lobster special: two lobsters for $25 - how can you beat that?

Oh, and the air conditioning? Easily some of the best around.
Posted by Mitch Weinstein at 9:01:00 AM 5 comments: 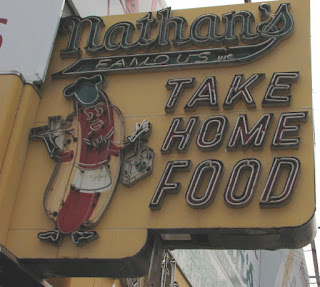 With apologies to the Excellents and Lou Reed too, I took a quick drive out to Coney the other day, for the sights and for the pizza. Yes, the pizza; after all, it's Coney that's home to the highly lauded Totonno's, at one time or another considered to be one of the top pizzerias in NYC...pizza of the New York style, that is.

Surprisingly, Coney Island and the boardwalk were kinda hopping, especially for a Thursday afternoon. I think school's out, so that probably had something to do with it, and a new amusement area called Luna Park (which is what one of the old amusement areas was called) has opened, all clean and spiffy. But I don't necessarily head out to Coney for the new - I always liked the rundown shabbiness of the place. Ghosts of fun houses and Fascination parlors past, if you get my drift. Like this one, a place where my high-school buddies and I wasted many an evening, I have to confess... 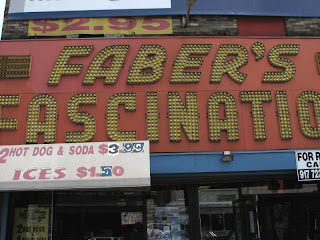 If you never played Fascination, I'm sorry for you. You don't know what you missed. Nat Faber had Fascination parlors in Coney Island, Times Square and out in the Rockaways. Those were the days. And who can forget the Bumper Cars/ Go Karts? Always got a kick out of those when I was a kid, and it looks like the kids still are - as long as they can afford the $6 tariff... 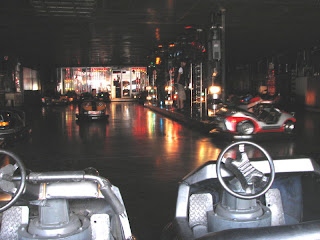 I think the "attraction" I liked the most on this quick trip was one of the shooting galleries, discovered up on the boardwalk between Luna Park and the Wonder Wheel... 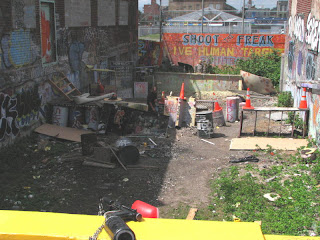 Yes, it's Shoot the Freak. With live human targets (he's running around back there somewhere, trust me). Ahhh Coney, we hardly knew you.

But really, we were here for the pizza, my cousin and me. Totonno's. One of the high temples of 'za, all the way out on Neptune Ave. So, what'd we get? Here's our pie being annointed with fresh mozzarella and pepperoni by one of the pizzaioli. Note that the tomato has not yet been added - probably to ensure the crust doesn't get soggy as well as to protect the cheese... 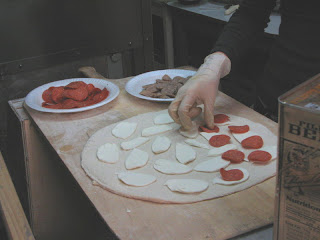 At peak time, when the oven is at its hottest, the pies probably spend 2 minutes or less baking. The oven is fired up to 1,000 degrees at its peak, but we were on the slow side of lunch, and our pie took around 4 minutes. No matter, it emerged blistered and bubbly and hot enough to burn the roof of our mouths on the first bite... 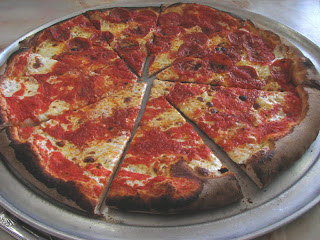 The slices stood up to the fold and eat test, too, with nary a droop... 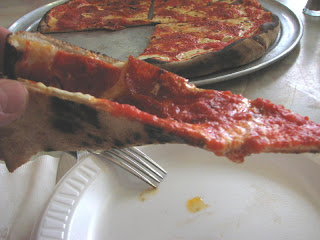 So how was the pie? Pretty good, with the tomato "sauce" adding the perfect balance of sweet and tart to the mellow cheese, and the pepperoni (on only half the pie) providing a bit of funk and a little kick. The crust was not perfect on this pie, a bit bready and without the puffy, holey texture that I look for. Surely due to the oven being a bit cooler than when it's fully fired. But still, a fine pie nonetheless.

Oh, Lou Reed and his Coney Island baby? Just so happens I was informed by my good friend Miami Danny (a man who spent many an evening palm-rolling the ball at Faber's, btw), Lou and his wife Laurie Anderson are King Neptune and Queen Mermaid at this year's Mermaid Parade. Not to be missed, I'm sure. And neither is Coney, whenever you get the chance. 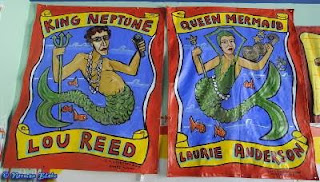 Chicken scarpariello. It's one of those seminal Little Italy dishes, or at least an Italian-American restaurant dish, no matter where the restaurant is. Except that the restaurant can't be in Italy, because I'm sure no one there has heard of it.

I think the first time I tried scarpariello, it was at one of the classic joints on Mulberry St. Maybe at Benito 1...or was it Benito 2? Maybe it was at Luna, some late night after one too many drinks out - but now that I think of it, was there even a restaurant called Luna? Could be I wasn't even in Little Italy. So forget about where I first tasted scarpariello - suffice to say, it stuck in my memory and for years I'd wanted to make it just the way I had it that night...wherever the hell it might have been.

So I looked through a couple of my Italian cookbooks to find a recipe. No such luck because it's not really an Italian dish, so there. I thought it might be found in my copy of Molly O'Neill's New York Cookbook, but it's not in there. Fortunately (so I'm told), we've got the internet. Use your google and BAM...instant 1,000,000 scarpariello recipes. That's a lot of recipes, and having just taken a glance at 10 of them, most of them don't look like what I want - not at all. Skinless, boneless breast - no thanks, Rachael. Recipes without hot, pickled cherry peppers; actually, no peppers of the vegetable variety at all - please, Carmine's.

In my mind, scarpariello has to have certain ingredients in it, no matter what. And those would be chicken on the bone, white wine, chicken stock, bell peppers, cherry peppers and their juice, onion, garlic and parsley. Anything else is improv and though there's nothing wrong with that, I'd be staying away from potatoes and mushrooms (make 'em a side dish) and sausage as well - it just gets in the way of the chicken.

In the version I recently made, which Significant Eater loved, the addition of a few chopped tomatoes that I had on the counter almost moved it to cacciatore country, but not quite. As mentioned before (and if you start listening, your chicken dishes will be better), get a good chicken or the dish will suck. Thighs and leg/thigh quarters are quite acceptable, and you'll run less of a risk of overcooking by using the dark meat. Reheats great, too - as opposed to the breast, which can tend to dry out.

Often, I'll hack the chicken up with my Chinese cleaver. Into small pieces - cut the thigh/leg into 4 or 5 pieces, say. But I was lazy, and I basically cut a whole bird up into 2 breast halves, 2 thighs, 2 legs and 2 wings. And it was fine. First, salt & pepper and then brown that chicken well in the oil - but you already knew that... 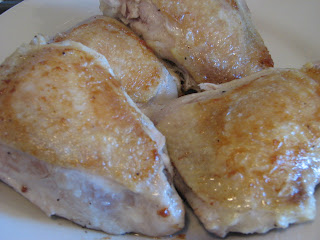 Remove browned chicken to a plate and add your cut up peppers, onions, garlic, etc. to the skillet. Let 'em soften and then add the wine and reduce it down. Now, add your stock (or water) and pepper juice, bring it to a boil and you'll have this... 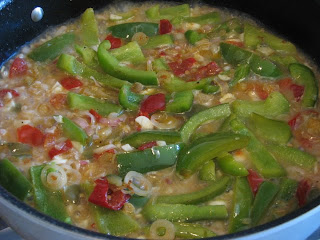 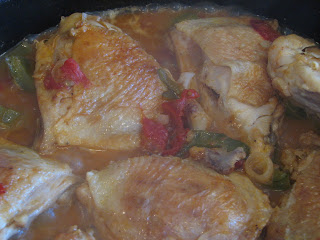 Total cooking time shouldn't be more than 25 - 30 minutes, and here's a tip...as soon as the breast is cooked through, after about 15 minutes, take it out and let the dish finish cooking without it - that way, you're assured of not overcooking. Take off the cover and let the sauce thicken a bit before adding back the breast pieces. Taste for seasoning - and if you like it more tangy, add a few squeezes of lemon...you'll be glad you did. Here's what the finished dish looked like... 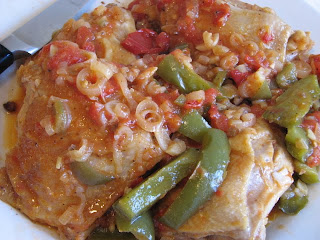 Not bad for a guy that can't remember when or where I first tasted chicken scarpariello. I'll bet you can't, either. But now you can go make your own.