One of the great things about NYC is that, on any given day, you can actually pretend that you live somewhere else.  With upwards of 150 different nationalities sharing our 5 boroughs, a trip somewhere distant may be as quick as a subway ride away.

Take Russia. A few weekends ago, we gathered up the clan and headed out to Brighton Beach, which sits way out at the ass end of Brooklyn, right smack in between Coney Island and Manhattan Beach. Brighton Beach is home to a large population of Russian speakers, many of whom come from Odessa (giving Brighton its nickname, Little Odessa), and the main drag, Brighton Beach Avenue, looks and feels like its right out of central casting (well, other than the el train, I suppose).

Do yourself a favor and start out with a stroll along the boardwalk.  On this sunny Saturday we were lucky enough to witness a chorale group of over 20 people singing Jewish New Year songs while facing the sea; Rosh Hashanah was only a day or two away.  At the venerable Volna and Tatiana Restaurants, with their big, round tables on the boardwalk, groups of middle-aged men (at one table) and women (at another) were merrily downing shots of vodka at 2 in the afternoon.  If you think that bottle of cold water you’re grabbing out of the cooler is water, take a second look – Tatiana’s cooler is full of cold, half-bottles of Stoli, which won’t quench your thirst as much as water, but might make you decide to take your shirt off – as a number of men at that table we were watching had done – and lemme tell you, the shirtless, suspenders over bulging gut look is all the rage in Little Odessa these days... 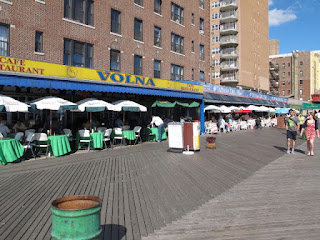 After our walk, it was time for a late lunch/early dinner and we headed over to Café Glechik, which bills itself as a Ukranian Fusion Kitchen in New York.  Whatever; it’s Ukranian at its core, and a glechik is “a clay jar, jug or crock with something delicious inside.”

Our first glechik came loaded with a huge order of “Siberian” pelmeni, filled with veal, beef, pork and who knows what else, all funk and juice inside… 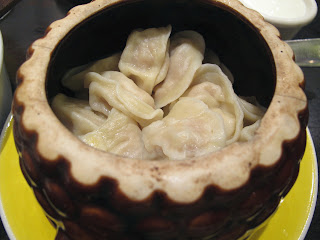 Vareniki always make a nice accompaniment to pelmeni, especially this order of farmer cheese stuffed ones, served with sour cream for dipping, just in case your cholesterol hasn’t ascended into the stratosphere yet… 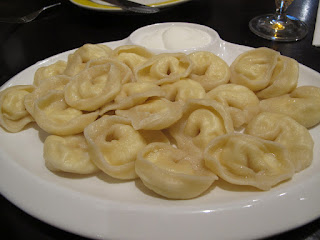 Who can go to a Ukranian restaurant and not order stuffed cabbage?  Not me. As one of the ladies at our table commented, probably the best stuffed cabbage she’d ever tasted; this version was far from the often too-sweet versions that showed up when I was a kid… 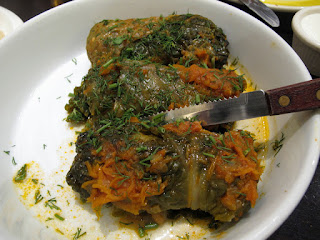 Making quick work of those appetizers wasn’t really a problem for our group -  I mean, Significant Eater and SMcPickles can really pack it away.  So it was on to our main courses.

Kebab doesn’t quite describe what you’re served when you order from that section of the menu.  Our lamb ribs “kebab” was actually a platter weighted down with luscious and salty grilled lamb ribs, buckwheat kasha better than my grandma ever made, cabbage slaw and plenty of onions… 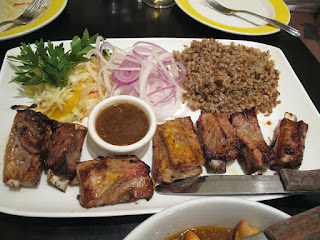 The “Glechik” stew knocked it out of the park. A big hunk of beef shoulder, braised into fork tenderness, served in its juices with a dozen or more fried potato vareniki, all of it strewn with handfuls of parsley and dill. Wow… 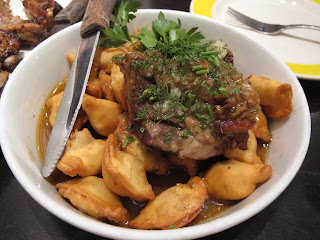 All of this food, along with 3 glasses of beer and a compote (which tastes more like Hawaiian punch than you can imagine) for the driver, came to under $80.  There might be some Russian oligarchs floating around Brighton Beach, who probably spend a lot of money on fancy women, fancy minks, fancy diamonds, fancy cars…and lousy basketball teams – meaning the restaurants had better be a good value.

No trip to Brighton is complete without some shopping. Food shopping, in our case. Even though this is where your lack of language skills might show up, have no fear.  Everyone’s friendly at Net Cost Market (though they might not look it – you know, like my grandfather from Minsk, they’ve got those Soviet genes) and I managed to buy breads, pickles, olives, cheese, sausages and even a tea specifically for my uterus, without a problem. The range of products at Net Cost is fairly amazing; just wandering the aisles is a mini-vacation in itself.

So listen up…the next time you’re thinking about flying Aeroflot to Moscow, do as they say in Brooklyn and fuggetaboutit. Brighton Beach is so much closer.

I don't know about you, but I'm happy that summer is drawing to a close; both on the calendar and in the air. It's happening and not a minute too soon.  Because? You know, it's been kind of a crappy summer for us, with the low point the passing of a good friend - my cousin Steve.

Also, what is it with every time I go back to where I grew up? Seems like it’s always a sad occasion - the death of an old friend’s parent or maybe even an old friend himself, which happened a couple of year’s ago.


Earlier this summer, one of my childhood friend’s dad passed after one of those all-too-familiar long struggles. There was a funeral and a shiva to attend. A shiva, for those who don’t know, is the Jewish mourning period during which the family in mourning receives visitors. So the day after the funeral another old friend (also, what is it with the old friends?) and I paid a visit to our buddy and his family – at the same house in which he grew up…significantly, a house where we spent a lot of time as kids hanging out, listening to too-loud music, doing a few less than appropriate things, and getting the eye-rolls from knowing parents who let us get away with more than we deserved to.

One of the things I try to do when I go out to my old stomping grounds, maybe in order to balance the sadness with some good memories, is to visit a place that was important and fun to us. A favorite hang out, perhaps.  Interestingly enough, many of those places involved food.

For instance, there was the Lantern, the local 24-hour diner that we boys used to go to late at night, after doing god knows what. Remember the movie Diner? We were like those guys, except no one in our crowd ever ordered their French fries with gravy; I think that's a Baltimore thing.

I digress. My buddy and I had decided, in a NY Minute, that we were going to stop for pizza at one of our favorite childhood pizza places on the way to the shiva call. You have to realize that there were any number of places where you could get damn good pizza back in our hometown of Franklin Square. I mean, the Square was probably 50% Italian, so there better have been. Let's see - there was Poppy’s, on Franklin Avenue and now a Ralph’s Italian Ices, at least sticking somewhat to tradition. There was La Stella, in a shopping center across from “the temple” on Dogwood Avenue, and I don’t have a clue what that is today. That shopping center also had Lox Haven – our own little Russ & Daughters, but with hot dogs, too. Man, those were the days..

But the best, the really best, was the pizza at Carmela’s, on Hempstead Turnpike just east of New Hyde Park Road. It was a classic joint too, with a counter, a couple of tables and a double Bari deck oven – none of that fancy wood or coal burning stuff needed in the Square. And really, it was great. Any time of day or night you could pop in for a slice or two and be supremely satisfied, with the beautifully balanced sweet and tart sauce and just-right-amount of cheese on top of a nicely baked, tasty crust; char was most likely non-existent, because back then everyone would’ve complained that the pie was burnt, wouldn’t they?

Today (or for the last 20 years, I’m told) Carmela’s is triple the size it used to be, with a full service restaurant added to the still existing pizzeria. Since we wanted to relax, restaurant it was. We ordered up a large pie, along with an order of baked clams, something said friend seemingly has to order in any pizzeria that has ‘em, including the places I warn him off of, like Arturo’s, where the pizza is exemplary but the baked clams are incinerated. At Carmela’s, no way – these little necks came out tender and juicy under their crispy, garlicky bread-crumb topping. If Long Island is good for anything, it’s the seafood – from clams to scallops, tuna to blues...
And then the pizza arrived, hot and bubbly, immediately bringing back those taste memories from a long time ago. We smiled knowingly as we tucked in – yeah, it’s still good...
Then we were off to the shiva call – to pay our respect and offer our condolences. Mr. L. put up with a lot from us kids…and he always seemed like a cool pop to us – I mean, the guy drove a freakin' Corvette, for chrissake. From the boys – RIP, Mr L.