Chicken Salad in a French Style

First, I was going to call this post Poulet Salé aux Herbes.  But it turns out that means salted chicken with herbs, and after being corrected by a fellow blogger, I decided to go with the language I sometimes understand best - English.  Although when translated correctly from French, Chicken Salad with Herbs sounds nice - salade de poulet aux herbes - don't you think?
The great thing about chicken salad is that it’s a perfect way to use up leftover chicken; oh sure, you can cook some chicken expressly for this purpose, but if you’re like me and enjoy roasting a whole bird even if it’s only two for dinner, there are going to be some leftovers. Significant Eater and I enjoy eating the leg, thighs and wings right off of the roasted bird. It's fun sorta acting like 2 cave people, and those parts are so much tastier than the breast – but in a chicken salad, the flavor of the white meat gets a nice boost from everything else, so using the leftover breast meat works out perfectly.
The “French” part comes in because instead of the usual American deli-style chicken salad that’s loaded with mayonnaise, this one is dressed with the ingredients for a vinaigrette, along with a good handful of chopped herbs including that most French of all herbs, tarragon.
I find that shredding the chicken by hand, rather than cutting it up into cubes, makes for a more home-style salad, both visually and texturally.  In this case, picking the meat off the carcass actually results in shredded chicken, so that’s another reason to roast a whole bird…just wash your hands really well before you start.
Here are almost all of the ingredients for the salade... 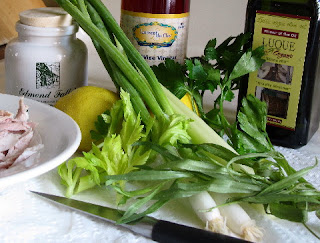 Toss everything together along with salt and pepper to taste. Keep tasting and adjusting with lemon juice/vinegar and olive oil until it’s to your liking. This will make a great sandwich; I think it’s also perfect served on a bed of lettuce with some sliced tomatoes and avocado… 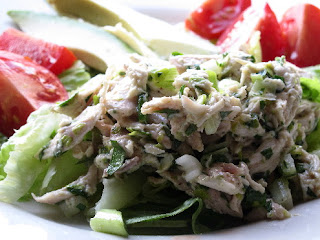 Toss everything together gently and taste till you like it.
Of course you can make more.
Posted by Mitch Weinstein at 2:13:00 PM 5 comments:

Cocktail Hour - A Snack and a Fitty - Fitty

Sometimes, trying to decide what you want to serve with the night’s first cocktail can be a little daunting. Of course you can be a heathen and serve nothing, which is basically what “bars” in the US do.  Even at those fancy schmancy cocktail places, it’s your ($14) drink and nothing else. Oh, I’m not counting the dive bars and the special mix of pretzels, peanuts and cheddar goldfish that sit up in a salad bowl on the bar during happy hour, absorbing god-knows-what varieties of bacteria and viruses, just waiting to be inhaled along with your $2 PBRs. I mean, it’s food, but…I’m not eating it.
With Significant Eater home for a 4-day weekend, that first cocktail and first cocktail snack become even more important.  Sure, I could put out a bowl of nuts or olives, and we’d both be somewhat happy.  It’s often what you get in Europe when you go out for an apéritif, and it makes your drink just that much more appetizing and grown-up.  Civilized even.
So today, as we were strolling by a farm stand or two under the FDR Drive, we spotted these and I knew they’d make the perfect snack… 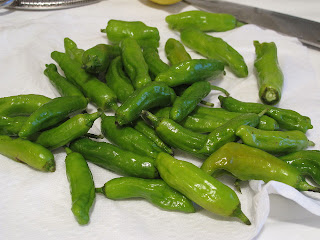 Little peppers are (were?) all the rage, since every place in the world that serves tapas has them on their menu. Usually they’re serving pimientos de padrón and the fun with padróns is that 1 in 10 of those little peppers are alleged to be super hot.  You eat them and, as they say, you takes your chances.
Note that these aren’t padróns, however; they’re shisitos and while they don’t come with a 10% chance of burning your tongue, they’re still damn good with the right drink.  So first, I heated up a cast-iron skillet till it was blazing hot… 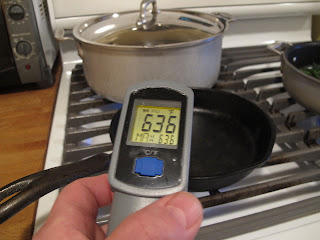 Then threw the peppers in and blistered them all over… 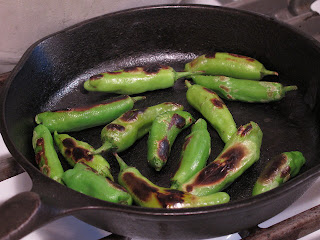 And what about that all-important cocktail? I thought that a Fitty-Fitty, a drink we first sampled at Pegu Club many moons ago, might go well with the peppers. It gets its name from the fact that it’s half gin and half dry vermouth, with a few dashes of orange bitters. A Martini for those who don’t really like Martinis.  It’s herbal, vegetal and even a bit fruity, so I pulled out the ingredients for it... 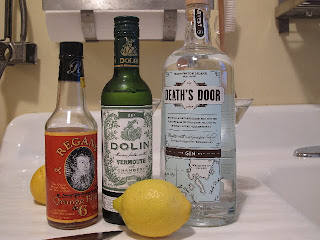 And before you know it, cocktail hour... 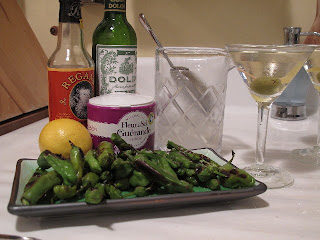 Fitty - Fitty (A Pegu Club variation)
1.5 oz. Good Gin (the Death's Door was quite nice, actually)
1.5 oz. Good Dry Vermouth
Few Dashes Orange Bitters
Twist (and an olive if you so desire...and Sig Eater desires)
Stirred on ice until icy cold and served up, heathens.
Posted by Mitch Weinstein at 9:12:00 AM 2 comments: