Le Bernardin - You Say It's Your Birthday (and Anniversary, Too)

This is a special year for both Significant Eater and me, as we celebrate milestone birthdays (though she only has a decade to catch up to me, since I will not be recognizing any more birthdays).  So in order to start marking both occasions (this is gonna be a long celebration), we did something we don't normally do - we went out to dinner. Okay, I kid - we go out to dinner way too much, but for this dinner we went somewhere pretty special...Le Bernardin.

It had been a long time since I'd eaten at Le B, and Sig Eater had never.  You know, Le B has its detractors; hard to believe perhaps, but google it up and you'll see it's not universally loved; after all,  what is?  Be that as it may, it's a NY Times 4* and a Michelin 3*, and as screwy as people think the NYT and Michelin might be, the *s still carry some weight in this town...just find me a chef that doesn't aspire to 4 or 3 and, well, maybe that person shouldn't be cooking?  Just sayin'...

Le Bernardin is a grown-up place.  It's not like the places we generally go to, which are geared to the way we eat now, whatever the hell that is. Men are required to wear jackets in the dining room (that was fun) and reservations are necessary. You check your coat before you even get to the host stand. There are maître d'hôtels. There are floor captains.  There are sommeliers. There are as many people keeping you happy as you can imagine - I wish my doctor's office was as functional (and since a visit to the doc is more expensive, why not?). There are big comfortable chairs and your neighbor's elbow isn't poking into you - unless, I guess, you're sitting at the bar...which I can't wait to do.

All that's well and good, but doesn't it really come down to the food? Oh yeah - the food.  I don't know if Chef Ripert was in the house (I kinda doubt it - it was a Monday night and there was some food fest somewhere else), but in a restaurant like this it shouldn't matter...and you know what? It didn't.  The food was pretty fucking great.  I think we got to the second course when Sig Eater looked at me and said: "this may be the best dish I've ever eaten."  After expressing my disbelief that it wasn't something I had cooked for her, I had to agree - she was happily devouring a sautéed langoustine with chanterelle and black Perigord truffle, and a taste was all I was allowed. My second, also from the "Barely Touched" section of the menu - was a king crab medley, served in a seaweed and shitake broth, sided with a Matsutake custard. Yes, please.

Each of our courses was accompanied by a different glass of wine that I had asked our sommelier (he's famous too...Aldo Sohm) to choose.  In a bit of a coincidence, I'd been at Cafe Katja a few nights before and mentioned to one of the owners that we were going to Le B for a birthday dinner. Turns out they're old friends, both being from Austria - and Aldo made me promise to tell Erwin that he missed Katja and would try to get there again soon. Aldo's wine choices were great - for example, I didn't know they were making Grüners in Santa Barbara, and the 2012 from Tatomer went so nicely with my crab.  The Austrian Blaufränkisch (a 2008 from Muhr-van der Niepoort) that he chose to go along with my lobster main course was a winner too. At first I was wondering about a red with the lobster, but of course it matched perfectly with the Sauce Américaine and it was hard to tell what was better - that sauce or the perfectly cooked lobster.

And that's the thing about Le Bernardin.  If you're a cook, you may think you can get seafood as pristine as this (here's a hint - the greenmarket's your best bet) but go ahead and try.  And sure, some of the preps are simple; let's face it, some of them are even plated raw - but go ahead and try.  And then there are the sauces and that's where the real problems might start, chef.  This is technically perfect cooking, with exquisite taste to match. I mean, I have some friends who are great cooks, and at this point I know my way around a kitchen pretty well - but if I said I was going to throw a dinner party "Le Bernardin style" - someone needs to tell me to go ahead and try.  I might come close on a dish or two, but...

There's a relative of mine who asks me, after I've eaten at a place, if I'd send my friends there, or if I'd go back.  As a matter of fact, I'd asked her to help me with the reservation at Le B, since I waited about 2 minutes too long before trying to make it myself, and I'd been shut out.  She's a friend of the house, and when I explained that it was our anniversary (I like to leave the birthday stuff out), we had a table booked no problem.  So - would I send you there? Yes. And would I go back? In a heartbeat - I'd eat food like this once a week, if the bank allowed me.  As it is, I can't wait to go back and sit in the lounge, and try some of the food offered there. Because this was, quite simply, one of the best meals I've had in NYC in a really long time.

And the house, knowing it was our anniversary, was kind enough to send this out as a "pre-dessert." Then they boxed it up and had us take it home so we could have it for breakfast the next day - pretty cool... 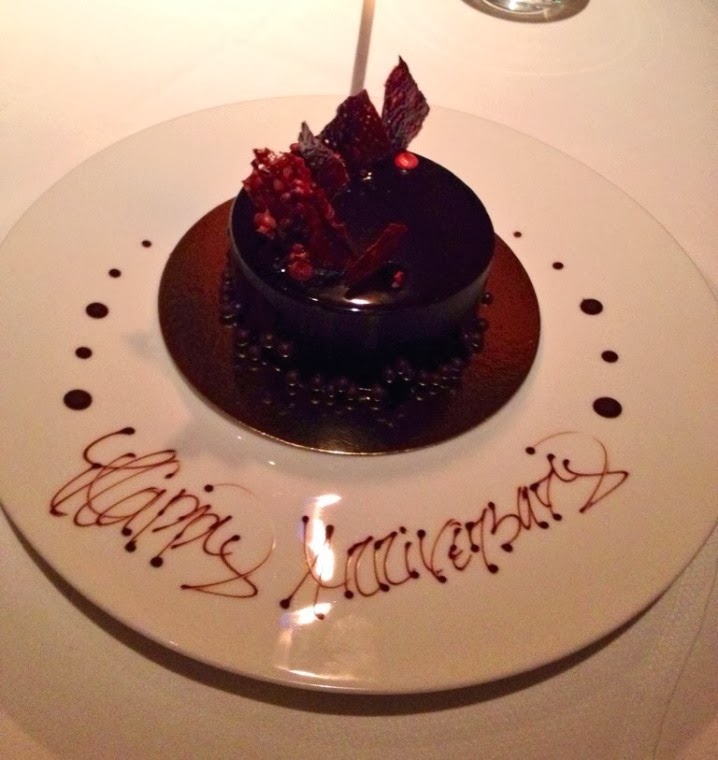 Comp Disclosure: In addition to two glasses of bubbly, which were a gift from the chef when we sat down (I think everyone gets this), we were served an extra course in between our seconds and mains.  Both the largest scallop I have ever seen, and a really playful charred octopus dish... 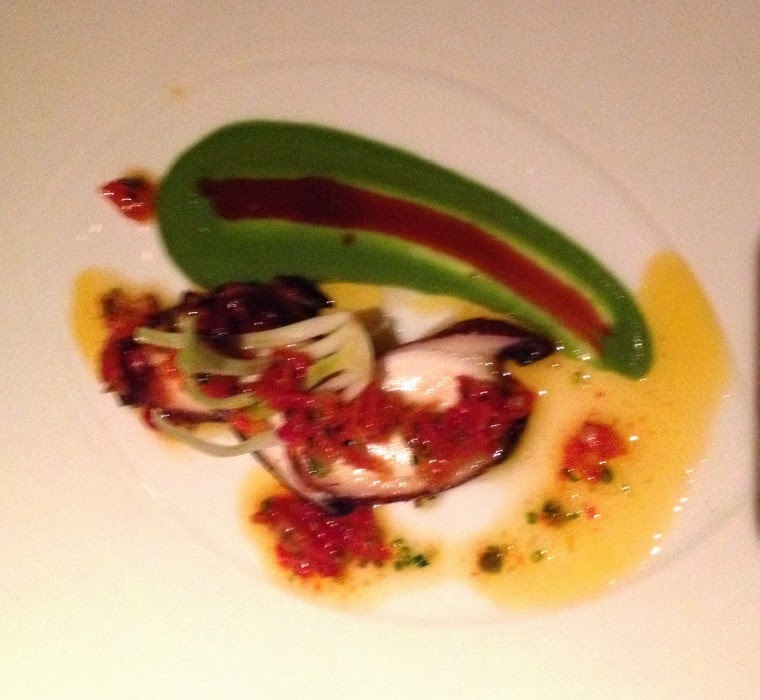 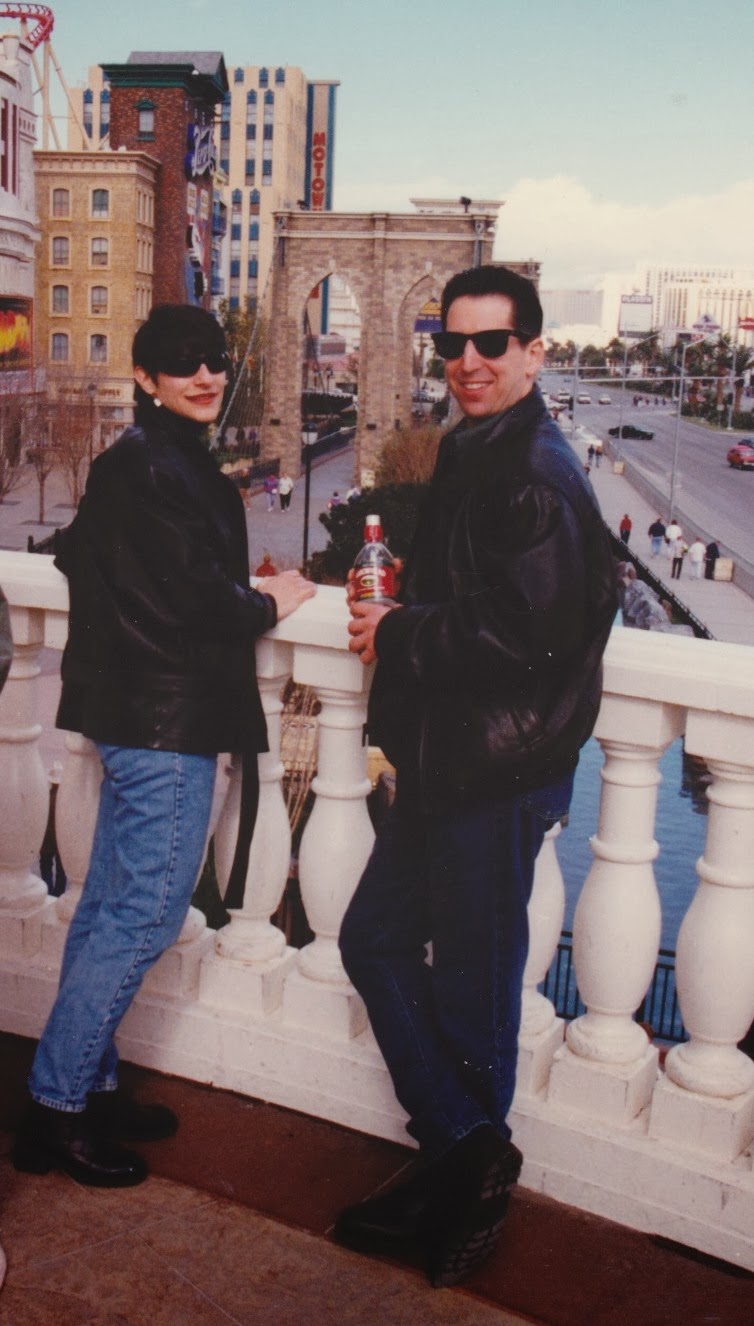 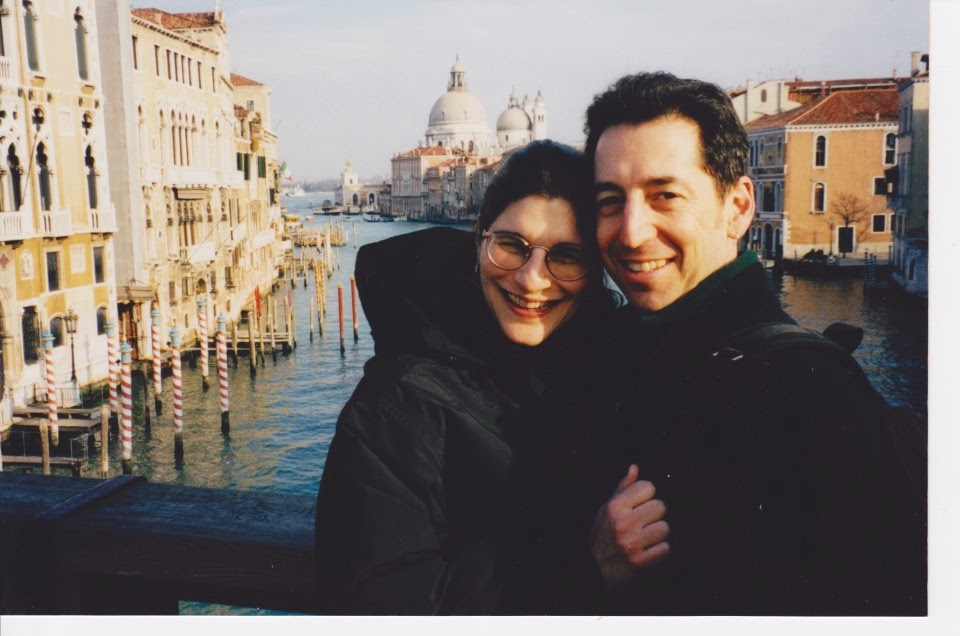