Louro - Invite Your Foodie Friends and Watch Them Be Amazed

Foodies.  Jesus, isn't that the most annoying word - what the hell is a foodie, anyway?

Oh wait, I know - someone who waits on a godforsaken 2-hour line for cronuts?

How about a 2-hour line for ramen burgers?  Or even, you know, a 2-hour line for ramen? Which, of course, will happen once Ivan Orkin-ramen opens his ramen-ya on Clinton St. (which I thought was supposed to open like a year ago? Must be the long lines at all those permit places...)  Anyhoo...so where am I going with all this? Oh yeah, foodies.

Last week I joined a group of friends for a delicious dinner at Louro, a cute little restaurant deep in the heart of Greenwich Village... 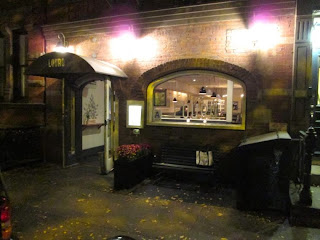 David Santos is the Executive Chef of Louro, and on Monday nights David and Louro offer a supper club called Nossa Mesa, which is Portugese for "our table." It's a prix fixe multi-course dinner and it's BYO; literally one of the great bargains in dining this city has to offer. 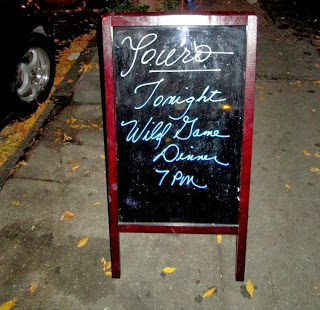 Yes foodies, a wild game dinner; perhaps not as exotic as a ramen-burger or a cronut, but probably went a little bit better with the stuff we were drinking.

Dinner started, after we'd all indulged in home-made Negronis, with an amuse of a lightly pickled oyster topped with a bit of venison tartare, not a combo I'd had before, but one which I'd gladly have again.  I loved the texture the oyster took on from the pickling (and it went nicely with the Asturian cider I'd brought)... 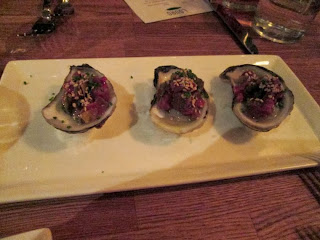 The oysters were followed by rillettes of wild pheasant, which could make me reconsider my craving for duck rillettes.  Next up was wild duck ham & eggs, the duck ham served with a perfectly cooked duck egg, sweet potatoes, red eye gravy and confit.

Moving along, partridge was the next course, the rare breast accompanied by a romesco sauce and barely cooked (the way I like them) shrimp... 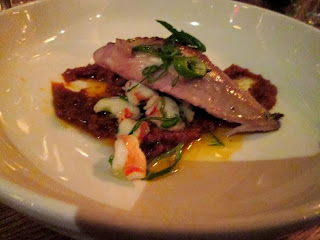 It's easy to overcook game birds like this, and it's easy to overcook shrimp (god knows I've had plenty of those), so it's worth pointing out that the technique here is excellent.  A hare course followed, with hoppity turned into a deeply rich ragu, served with wild mushrooms atop a creamy bed of polenta.

Our final savory course was wild Scottish grouse, a truly gamey-tasting bird, served blood-rare in a bit of its own jus, along with oats, jicama and blackberries which had been soaked in mezcal to pick up a smoky flavor, nicely complementing the grouse... 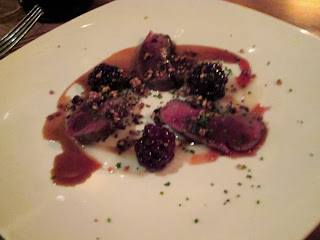 Dessert was charred figs with cardamom cream and butter pecan crumble; not too sweet, and really a good way to end this meal.

Our table of six had brought along a bottle of Negronis, a couple of bottles of cider, 5 or 6 bottles of wine, and a lot of healthy appetites.  A few of us are or were in the food biz; a few just really enjoy good dining. I think I can speak for everyone by saying that this is one that this is one of the great values in dining in NYC.

So get with it all you foodies - Pickle Day is over (yeah, it was yesterday) and you don't know what you're missing.  And, there's no line.
Posted by Mitch Weinstein at 11:58:00 AM No comments:

Fish soup isn't something I make on a regular basis. But because my really excellent fishing adventure just after Labor Day gifted me with about 5 lbs. of gorgeous striped bass (vacuum sealed and in the freezer), and because Significant Eater (for some reason?) decided that she wanted fish soup, out came the 4 quart saucepan the other night.

Oh yeah, I've made different variations of fish soup before.  Once, I made an outstanding Cioppino, even making a fish/crab stock for the base; the house smelled like fish for about a week after that.  I've made clam chowder - both cream and tomato based.  I've even made Bouillabaisse, and boy is that ever a lot of work...just spelling it is a pain in the ass.

Anyway, this fish soup was gonna be easy - I only wanted to use stuff I had in the pantry and or fridge.

1 pound striped bass (you can sub other white, meaty fish), cut into chunks

parsley, minced (use stems with thyme and bay leaf to make bouquet garni)
Salt and pepper

Bring stock to simmer and add saffron to infuse.  Oh yeah, if you don't have saffron, don't worry  - do you have any Old Bay?

When vegetables are translucent, add pimenton and stir. Add wine and cook it off. Add tomatoes, broth, water, bouquet garni, salt and pepper.  Bring to simmer; let simmer for 30 minutes. Season it to taste.

Add fish - cook till done - maybe 5 minutes, maybe 8 or 10. Remember, it's going to keep cooking after you turn off the heat, so better to undercook slightly. Remove bouquet garni, add parsley, stir, TASTE and serve. 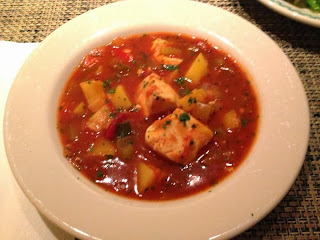 The first week of October, sponsors Honest Cooking, Restaurant Aquavit, The International Culinary Center (nee The French Culinary Institute) and the Norwegian Seafood Council, along with a number of outstanding NYC Scandinavian restaurants, hosted the first ever North, a Nordic Food Festival.

North brought together outstanding chefs and purveyors from NYC, Iceland, Denmark, Sweden, Finland, and Norway. There were lunches, dinners, classes and more; good times were had by all.

And me? Well, I simply volunteered, via Honest Cooking, both to work with the chefs preparing and serving the opening Gala Dinner for 80 people at ICC, and a few days later helping out at a number of classes.

It felt great that it only took a week for me to get the feeling back in my hands, back and feet, after a day that started at Restaurant Aquavit on the morning of the Gala.  Marcus Jernmark is the Executive Chef of Aquavit; he ran the show for the Gala Dinner - and man, is he ever good. Also at Aquavit that morning were Gustav Trӓgårdh, head chef at Sjömagasinet in Göteborg, Sweden, and Frode Selvaag, head chef at Landahuset, in the Ryfylke region of Norway. Frode happens to be a spokesperson for the Norwegian seafood industry, and that group brought along some great salmon and white halibut to showcase at various lunches, dinners and classes.

After getting the grand tour of Aquavit, Frode, Gustav and I ended up together in the fish kitchen. Watching real pros butcher fish is a treat. My job was a little more pedestrian - I  got to shuck a few Maine diver scallops... 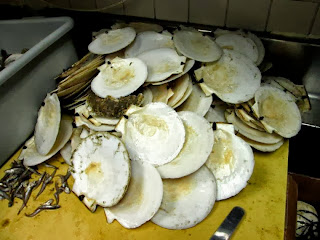 Okay, 250 diver scallops, and now you know what I meant by getting the feeling back in my hands.  Check out the little anchovy-like fish in the bottom left of that picture - that's what the scallops were having for dinner, so you just know they're going to taste good.

We worked at Aquavit for about 4 hours, and then packed up and headed down to the ICC for dinner prep.  Dinner was a collaborative affair, some chefs working together on a course, others alone - and it was 8 courses long.  As I mentioned above, the chef for this event, the big Kahuna, was Marcus Jernmark, who ran the kitchen like clockwork.  As the former executive chef for the Swedish Consulate here in NYC, his experience at feeding large groups of people multi-course menus runs deep. Here's Marcus, letting everyone know what's up... 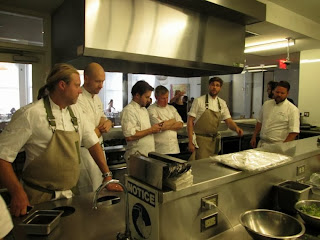 Snacks, to go along with cocktail hour, were Preserved Summer Vegetables, and they were prepared by Frederik Berselius, who had literally just earned his first Michelin star at Williamsburg's Aska, and Esben Holmboe Bang, of Oslo, Norway's Restaurant Maeemo, which has 2 Michelin stars - oh - there were a lot of Michelin stars floating around in the kitchen that night, and it was a privilege to be in their company.

The first seated course was Gravlax, Cured Salmon with Dill, Seaweed, Cucumber and Micro Fennel, and what a winner. Prepared by Gunnar Karl Gíslason, of Reykjavik, Iceland's DILL Restaurant, here's what plating for 80 looks like... 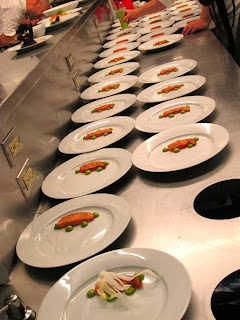 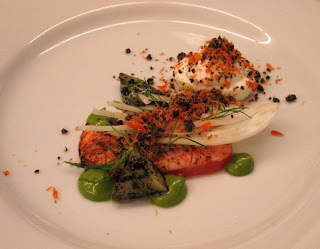 My mistake was in not asking Gunnar for some of that "soil" strewn across the top of the dish (or maybe the recipe for the whole dish, Gunnar?).  This was followed by Acme Chef Mads Refslund's Fermented Fall, Seasonal Fruits and Vegetables, a melange of, well, fermented and raw seasonal fruits and vegetables and (I sliced the chestnuts for this dish)... 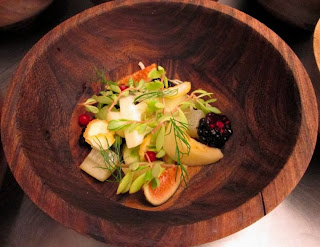 Marcus and Gustav collaborated on the next dish, and here's the setup for that... 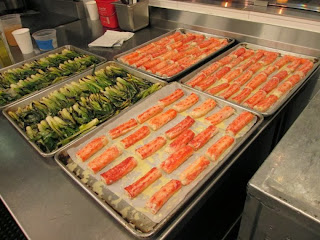 Norwegian King Crab with Parsnips and Dill Flower.  Plated, it looked like this... 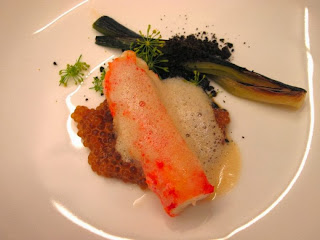 The tapioca pearls and charred leek bring a nice, earthy dimension to the sweet crab meat...pretty damn delicious.  Frode was up next, serving... 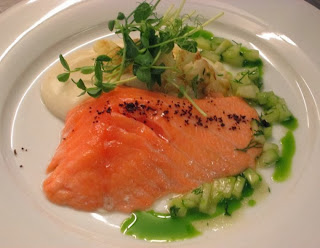 Lightly Smoked Norwegian Salmon, with Cauliflower, Dill and Cucumber.  This was the dish that Frode was prepping while I worked alongside him shucking those fucking scallops.  First, beautiful, whole salmon are butchered into filets and brined for a short period of time. Then cold-smoked. Finally, before service, the salmon is briefly roasted till barely cooked...it's quivering. There's cauliflower puree. Roasted cauliflower florets. There's cucumber and dill oil. There's soil. There's raw stuff. There are about 10 components to the dish and 10 steps to finishing it; suffice to say, it was super.

Carl Kristian Frederiksen, of NYC's Aamanns-Copenhagen, showcased the Castello produced Unika cheeses from Denmark. Carl paired an awesome dill flavored cheese, called Troldhede Krondild, with Honey, Pickled Elderberries and Rye, for one of the best cheese plates I've ever had.

Spelt Licorice, Licorice Ice Cream with Sourdough Chips was the first of the 2 sweet courses, and the brainchild of Sasu Laukkonen, of Restaurant Chef et Sommelier in Helsinki, Finland.

The final dessert course was from NYC's Mast Brothers Chocolate; Chef Vesa Parviaine's Chocolate Petite Four, Chocolate, Rye and Pickled Blueberries was just sweet and tart and earthy enough to let you know that you had just experienced a unique meal... 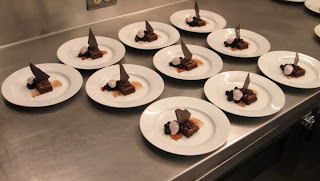 Of course I'm a little biased about all this food and its deliciousness, but that'll happen when  you have the pleasure of working with some really nice people and some great chefs.  Also - it was that good...and I learned a ton.

Kalle Bergman, the founder of the international online culinary magazine Honest Cooking and Marcus Jernmark, partner and Executive Chef at Aquavit, were the driving forces behind this NYC first - a week-long food festival dedicated to Nordic cuisine. They, along with their staffs and every other chef, teacher, partner and volunteer who gave their time to make this event a success, should be proud.

Me - well, Significant Eater and I are looking forward to some upcoming meals at the restaurants here in NY that I mentioned above.  And we've always wanted to vacation in Scandinavia; after tasting these chefs' dishes, I don't know where I'd want to go first.

Oh - as for next year's North festival - I've already ordered the oyster gloves. You know - just in case I get the scallops again.

And thanks to photographer Signe Birck, I was able to sneak myself into this photo of all the great chefs mentioned above...I'm the nebbishy guy with the glasses, btw... 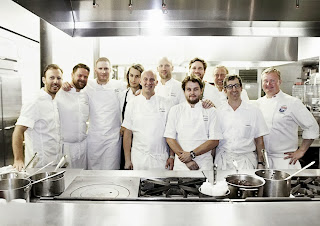