Delray Beach Has Some Nice Rack's

Sometimes you have to, just have to, spend some time in a place that you wouldn’t necessarily pick to go to as your first choice.  Maybe it’s because someone else has chosen the place; perhaps you’ve got to go somewhere for business; you could even be held somewhere against your will, I guess.  In my case, and most recently, the place I’m referring to is Delray Beach, Florida, for the reason that I mentioned in a previous blog post.

Well, the worst part, the emotional upheaval, is mostly over.  But there’s also been the handling of the “estate.” Yes, that’s what they call all the things that are left behind after someone dies; it doesn’t have to be what one thinks of when one thinks of an estate; you know, this wasn’t any Gatsby shit or anything like that.  But still, there’s a house, there were a few chatchkas here and there, there are bills to be paid, there’s a lawyer and so on.

So, due to the fact that said “estate” happens to be in Delray Beach, that’s where I’ve been traveling to every couple of weeks over the past 2 months.  Selling the house and emptying the house of all worldly possessions has been the goal; I’ve had plenty of help, as my sisters, an in-law or two, and Significant Eater have all thankfully pitched in.  But…it’s Delray Beach, and if you know me, and you know Sig Eater – we gotta eat.  And the choices in Delray are, shall we say, not exactly haute cuisine.

What’s an eater (especially a Significant one) to do?  Well, there are a few notable Jewish delis – there’s Flakowitz’s, where the surly service alone might make you think you’re back at Ratner’s, but the corned beef and the stuffed cabbage are serviceable; as a matter of fact, they make a fine corn rye – something which is practically impossible to fine in NYC any more.  There’s also the 3Gs, which is pretty much the same, though the baked goods don’t compare.  And for shopping, there’s The Boys, which basically started as a little produce stand (a story which my mother literally told me every single time I went to shop there) but now has a full blown butcher and fish department, cheeses, fresh roasted coffee, wines, etc.  I sometimes wish I could get melons and mangoes, oranges, grapefruits and lots of other fruit at the quality The Boys sell up here in NYC – but we simply can’t.

And finally, there’s a place that recently opened its first location in "downtown" Delray Beach;  I’ve returned 3 or 4 times over the past couple of weeks, and it's actually quite good.  Its unfortunate name is Rack’s, which is a funny name for a seafood restaurant but becomes understandable when you meet the hostesses and bartenders and see the outfits they’re wearing.  Racks, indeed.

Okay - back to the food.  Every night they run a nice happy hour at the bar: half-priced drinks, beer and wine, all appetizers at ½ off and $1 oysters.  We easily devoured 2 dozen nice meaty Blue Points (though the shucking wasn’t perfect) as well as some nicely fried clam bellies.  Moving to a table,  a few wimpy cousins weren’t able to finish their orders of linguini with clams, piled high as their plates were with a dozen good sized, fresh from the sea little necks.  My simply grilled swordfish was prepared just this side of medium, exactly how I requested it.  And a lobster roll to round out our four top was just right.  Even the dessert, usually a toss away in a seafood place, hit the spot – a super fresh blueberry bread pudding with a giant scoop of vanilla ice cream made us all smile.

This was just what we needed after a bit of an emotional ride; packing and giving away 80 years of memories isn’t always easy, and knowing you’ll never return to a place where a lot of happy times were had is sad too. And even if you don’t love the food…there’s always, well, the Rack’s. 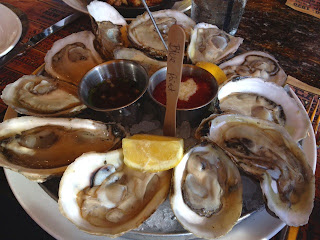