Oh, what the hell. And what else is there to do?
SPAGHETTI WITH CLAMS 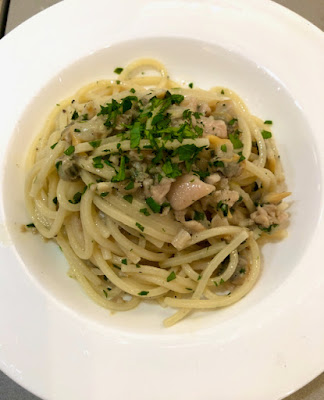 I call it old school, because it's like the spaghetti with clams I used to make when fresh clams were unavailable to me (hey, I lived in San Jose for 16 years!). So - what follows is my recipe for spaghetti with clams (okay, some are cockles) (and all clams are from cans).

225 grams good spaghetti - don't use anything but real spaghetti (yeah linguini works), not that shit made out of lentis or corn or quinoa. I happen to use Setaro, because it's good. As a matter of fact, for a dish with canned clams that's old school, Ronzoni or DeCecco are fine. 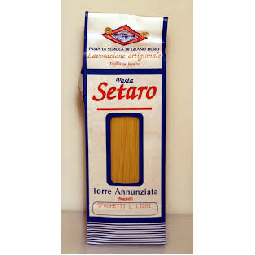 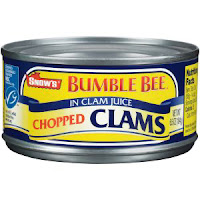 1 can Matiz Berberechos - that's just a fancy word for wild cockles, but good ones - you can eat these right out of the can, which I don't suggest for that Bumble Bee product.

You know how you know it's just a fancy word for cockles (other than the fact it's translated for you right on the front)? Well, they also package a can like this - either is okay with me.

1 nice, big, fresh (yeah, farmer's market stuff) clove of garlic, sliced thinly, like from that scene in Goodfellas, where Paulie is slicing the garlic in jail. If you haven't seen Goodfellas, stop reading.

Fry up (yeah - sauté) the garlic and crushed red pepper and some of the parsley in the olive oil until the garlic is lightly browned; not burnt, cause that'll fuck your dish up. Add the juice from both cans to this pan, and drop your spaghetti (linguini?) into another pan in which you're boiling about 3 liters of water, lightly (in this case lightly, because as I already told you, the clams are salty) salted water. Reduce the clam juices while the spaghetti is cooking. Since I use Setaro spaghetti, that takes about 10 minutes.

When your spaghetti (linguini?) is almost done, remove it with tongs into the pan where you are making the sauce. At the same time you do that, add all the clammy stuff to that pan, and a little pasta water - like 1/4 cup. Now, keep tossing that spaghetti (linguini?) and clams and sauce till almost all the sauce is absorbed - if you don't think there's enough sauce in the pan, this is where your pasta water comes in handy, and also why you don't just dump the pasta into a colander in the sink (well you can, but save some of that water). Add some pepper. Taste it - see if it has enough salt - if it doesn't, what are you smoking?

Plate the stuff (tongs!), scrape up the schmutz (if any) that's left in the pan, and put it on top of the spaghetti (linguini?), and sprinkle the rest of your finely chopped parsley on top.

A crisp white (with a little salinity) would work. From Lazio. The Veneto? Spain. Even a sherry. You figure it out - I've already done enough, and let's face it - it's really too hot to make spaghetti (linguini?), but...
P. S. If you are lucky enough to have access to good, fresh clams (yeah, farmer's market or better), then you could make a dish like this...
Happy As A Clam
Or, if you just want to fancy this one up a bit, add a little (okay, 1/4 cup) of the wine you're drinking to the pan after the garlic is browned, and let it evaporate before adding the clam juice. You won't taste the difference, but you'll think it's better.
By the way, if this isn't better than 99% of the spaghetti (linguini?) with clams you've ordered in a restaurant (well, unless that restaurant is in Rome or Venice or the restaurant is using fresh clams and the pasta station really knows what they are doing), don't blame me. After all, look what happened to Joey Gallo after his spaghetti (linguini?) with clams. 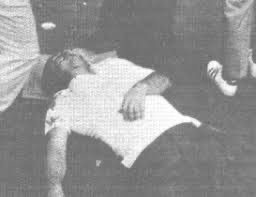 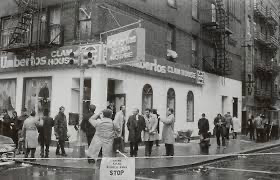 Buon Appetito!
Posted by Mitch Weinstein at 9:40:00 AM No comments: