Allright, I've heard about all of the apologies. I've even listened to some of the apologies. Saw on the news about how the storm/blizzard was apocalyptic. Etc. Etc. And yeah, I understand it was bad. As a matter of fact, at one point I was standing in our kitchen looking out the window at the snow blowing sideways and I actually saw lightning and heard thunder. Out of the ordinary, for sure, in the middle of the winter. I even heard it referred to as a category 1 hurricane...with snow. Really.
But this is New York City. A city of what - 10,00,000 people? Financial center of the world (or maybe it used to be). A city which is in and of itself, proof that hundreds of different kinds of people can generally live together in peace and harmony. People from all over the world. The great experiment...that works (at least most of the time).
So, as I say in the title: "What the fuck?" Hey, Mr. Mayor - what is going on? You're a mayor who prides himself on "his" city being "ready for anything," and tells that to any and everyone who will listen, over and over again. During this snowpocalypse and its aftermath, you told New Yorkers not to drive and to use mass transit or walk to your destination. Then you even blamed New Yorkers for the problems with snow removal. But get real, dude.
So last night, a full two and a half days after the end of the storm, Significant Eater and I decided to walk up to a new restaurant on Essex St. just north of Delancey. It's a short walk from our apartment; less than 1/2 a mile, as the crow flies. And here's what we found:
First, the whole east side of Essex St. between Broom and the subway entrance had not been shoveled. So walking to that subway entrance was challenging, to say the least. Unless you had a pair of snowshoes for that walk. And then, this...

That's 3 feet of snow piled up at the corner of Essex and Delancey Streets. Essex and Delancey. Delancey is an 8-lane road leading to and from the Williamsburg Bridge, for those not familiar. So, it's A MAJOR INTERSECTION. And it had had so little snow removed that pedestrians had to walk in the middle of the streets. This is not an easy intersection to cross (people are killed at this crossing every year) in the best weather or conditions.
So, stop apologizing already, Mr. Mayor. On TV this morning, they said that promises that were made to get all NYC streets cleared by 7 AM today had not even been met. Perhaps, Mr. Bloomberg, you could take a few million dollars out of your piggy bank to help hire some day laborers to do some shoveling. After all, how much did you spend to overturn election laws in order to win a 3rd term as our mayor? This would be a mere pittance compared to that.
It's time to stop making excuses. It's time to stop making promises. It's time to do your friggin' job that you bought your way into. After all, this isn't DC, where they don't even bother removing the snow. This is the greatest city in the world - remember?
Posted by Mitch Weinstein at 6:59:00 AM 5 comments:

Oh, that Cook's Illustrated. I've been subscribing to Cook's Illustrated for years. And years. I like the fact that there are no ads - other than for themselves. As far as the homey schtick goes, well, that's okay too, I guess. Kimball's opening editorial brings me right back to the old farm in Vermont...if I had ever set foot on an old farm in Vermont. Be that as it may, I generally read an entire issue (in one sitting), and come away having learned something and in the mood to try one or more of "their" recipes.

The coolest thing about Cook's Illustrated is that they've made testing recipe variations their raison d'être. I mean, they appear to test recipes 50 different ways, tweaking and twisting and cajoling till they find the one that they feel is the best. And that's the one they give you...it's awesome.

Of course, I myself have tested various recipes over the years. With a pretty large cookbook collection, that's a given when trying something new. I'll take out 3 or 4 (or 12) different cookbooks, check out Significant Eater rolling her eyes; then read what each author has to say, do an amalgamation and cook. Usually, it works out pretty well...when cooking (not so much for baking, though).

But, there's a major difference between the way CI approaches the task vs. how I approach the task. They (CI) appear to keep very good records and write everything down whereas I...ummmm...don't. And therein lies the problem - I never remember what the hell I did when something comes out great. So, what to do? Well, my resolution for 2011 is to start writing stuff down and see where that leads. Stop laughing; after all, 2 years ago I decided to start blogging and I'm still here...most of the time, anyway.

Back to Cook's Illustrated: the current issue (Jan/Feb 2011) has a recipe for Thin-Crust Pizza. As the cover states: "Finally, A Foolproof Crust." Whew - finally! Let's not forget that over the years Cook's Illustrated has probably published over 50 recipes for pizza (maybe they forgot to write stuff down?) and they've finally figured it out; well, at least until the next "greatest pizza ever"... I kid, I kid...I'm sure this is the best.ever. Wink wink.

Since I've had pizza issues of my own over the years, I immediately decided to follow the recipe EXACTLY as it is written - well, for the crust anyway. Toppings - that's another story. So in picture form, here's what this experiment looked like: 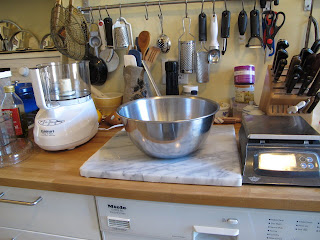 Dough after mixing in food processor... 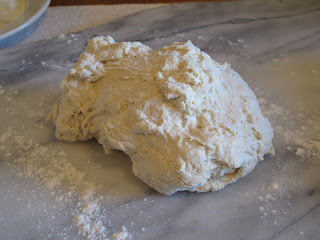 Dough after another minute of hand kneading... 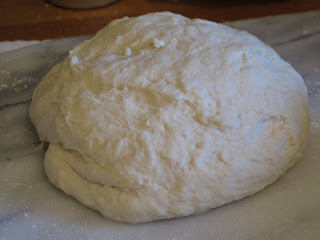 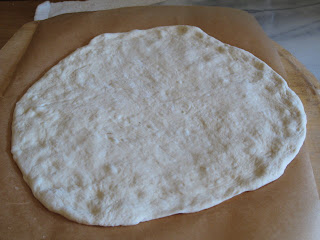 Okay, this is where I started veering from the recipe a bit. I love using parchment on the peel...CI apparently doesn't. But I've had too many accidents sliding the pie onto a 550 degree stone and parchment makes that part idiot-proof. And...I don't even have to write it down to remember. Next, the pizza with topping (forget the recipe at this point, folks)... 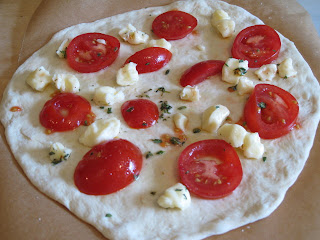 I had some good (for winter) Campari-brand tomatoes to go with mozzarella curds from one of my favorite cheese vendors (Saxelby's at the Essex St. Market), along with a bit of fresh thyme and olive oil brushed on top. Into the oven, which had been preheated for an hour with the stone on a top shelf (per the recipe!) and check out what emerged a mere 7 minutes 30 seconds later... 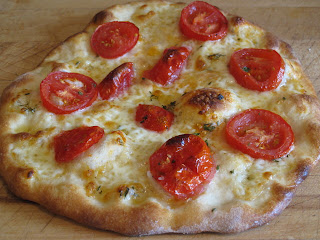 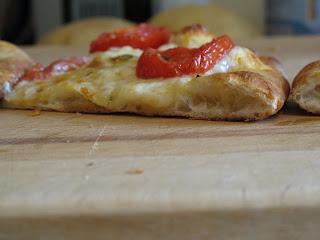 Not bad, huh? Exactly what I'm looking for in a thin-crust pie. Thin and tender. Foldable, even. Holes in the crust from the tip to the cornicione. In my obviously objective viewpoint, the best pizza that has ever emerged from my home oven. A big wow.

So what's the big change from my previous attempts at pizza vs. this greatest ever pizza dough? Well, I think the long rise (24 hours) in the fridge makes this dough so delicious...and so easy to work with. There is very little fermentation taking place at room temp, and the fridge time really develops the flavor as well as relaxing the gluten, making the dough quite easy to work with (i.e. stretch into a pizza). All quite scientific, I know - but that's what great bread (and pizza) is all about.

Lest anyone think that all is wonderful with Cook's Illustrated, and that my days of curmudgeonliness are behind me, hah! Here are two issues which bug the hell out of me:

1. I've been a subscriber since for-fucking-ever. Literally, issue number one, I think. Why the hell should I have to pay AGAIN for an on-line membership? Bite me. Even the New Yorker gives me online stuff for free.

Anyway, that's about all I'm gonna say on the matter. The pizza was indeed great. I'm not gonna publish the recipe - check out their web site and get it for free (well, at least for 14 days).

Besides, I don't need Kimball coming around my place in his Model-T with his 12-gauge ought 50 shotgun or whatever. He needs to stay in Vermont. NY is the place for me. In all it's pizze glory.
Posted by Mitch Weinstein at 7:54:00 AM 5 comments:

Email ThisBlogThis!Share to TwitterShare to FacebookShare to Pinterest
Labels: Pizza

Back to Barcelona - Restaurant Gelonch

Yeah, yeah...I know. I have been one lazy bastard when it comes to blogging. Maybe it's the weather? Or being under the weather? Maybe it's politics? Maybe it's that I hate the fact that our vacation came and went "in the blink of a young girl's eye (with apologies to BS)...glory days?" Maybe it's a combo of everything? Anyway...back to Barcelona. At least this way I can relive our vacation vicariously through a blog post and photos.

First off, I gotta say, Barcelona is one helluva big, beautiful city. Stunning architecture, broad boulevards, huge placas, tiny placetas, right on the Mediterranean (of course I'm a big fan of the beach), etc. etc. I mean, even the lifeguard stands are works of art... 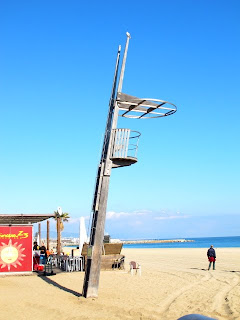 Passeig de Gracia is just one of the wide boulevards... 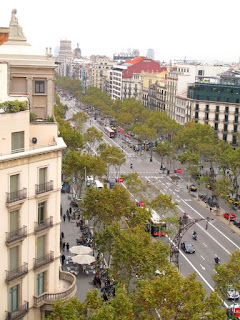 While Placeta de Manuel Ribé is just one of the tiny placetas... 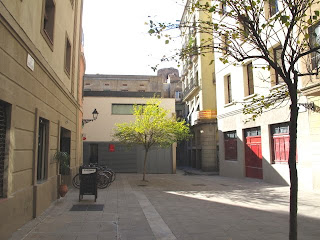 For architecture, there's always Señor Gaudí, who spent a lifetime enriching Barcelona (until he was run over by a tram, that is)... 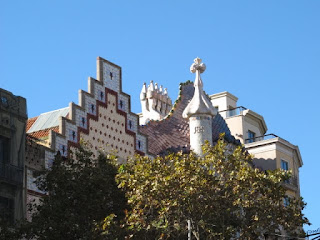 Great museums? Yep. And the food? Pretty friggin' outrageous. So let's put it this way - if you're thinking about taking a trip to Barcelona, just go. You'll be happy you did.

Looking back to our favorite meal in Barcelona...there were plenty of wonderful tapas (more about them soon) and some great traditional meals as well. But as far as Significant Eater and I were concerned, the most amazing meal we had was at Restaurant Gelonch. Here Chef Robert Gelonch blew us away with dish after dish of near-flawless food - something like 9 courses for the set price of 45 euros...that's not a typo...45 euros.

So, what did we eat? After starting with a pair of oysters topped with a passion fruit and gin and tonic gelee, there was "Wagyu beef carpaccio on a cracker with grilled artichoke and rucola," tasting as fantastic as it looked... 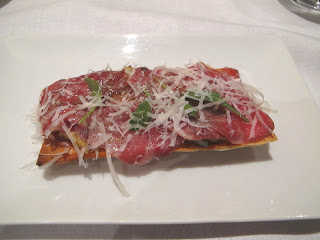 Followed by "Cuttlefish taglierini with deconstructed pesto," with the tenderest cuttlefish imaginable... 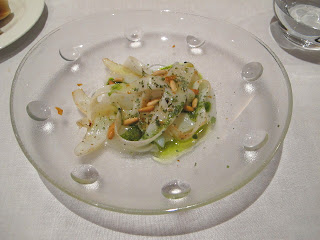 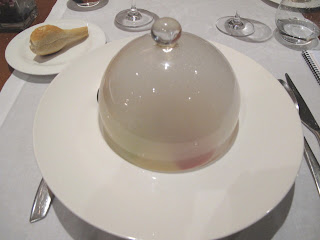 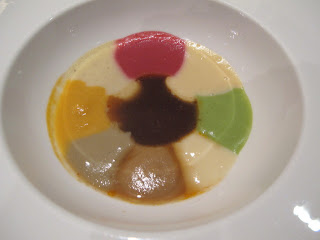 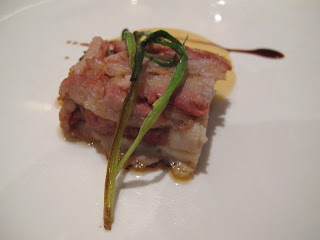 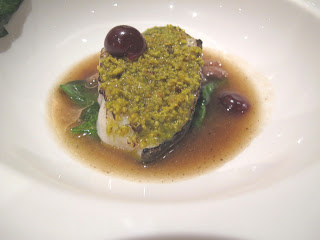 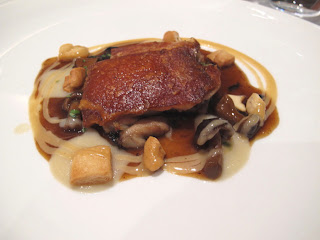 I love pig two ways. Significant Eater does too, but I don't know if she liked it more than this course: "Assorted cheese with bananas and honey cream, coffee crumble, sweet baked endives and eggplant ice cream..." 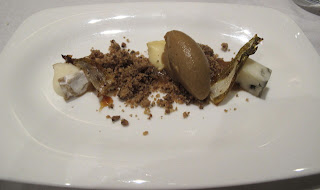 And then, "Catalan cream custard foam with apple sorbée, lemon soft jello, caramelized apple and confited lemon peel," which was really good, but I don't have a picture. I think chef might've known I forgot to take a picture, so he also sent this out as a gift of the house, in case we were still hungry... 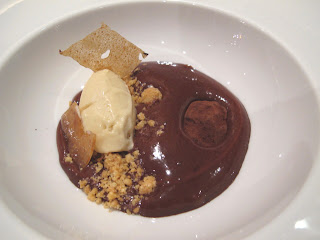 Even though I took notes throughout the meal, why bother? It was all delicious, nothing that I wouldn't eat again (including the eggplant ice cream), some of which I'm dying to eat again (hello Iberian piglet, and as good as Great NY Noodltown's piglet is, it isn't Iberian piglet), cooked by a passionate chef with a small brigade and served by a wonderful waiter who knew each dish backwards and forwards and graciously answered all of our questions.

Still thinking about Barcelona? Go. I can't wait to return.