Everybody likes chicken, don’t they?  I mean, if they didn’t, why would almost everything else, when we don’t really want to know what to compare its taste to, taste “like chicken?”
Ever had frog’s legs? They taste like chicken.  What about ‘gator? Tastes like chicken.  How about rabbit? Well, silly, of course - it tastes like chicken.
Funny thing is, most other birds that we eat don’t taste anything at all like chicken. Seriously, does a duck taste like chicken? No way.  What about a goose or a squab or a pheasant or a partridge?  You gotta be kidding me.  Which brings me to the dinner I prepared the other night, after rummaging through the freezer the day before, figuring with the hurricane coming it might be a good time to use up some of the stuff I’ve had frozen for a while.
What I found in my bottom freezer drawer, all nice and cute in their package, were these little guys… 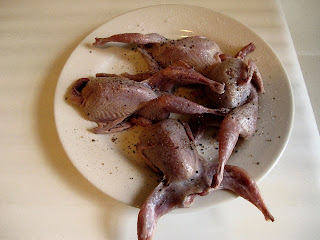 Setting aside the fact that they are practically pornographic in that pose, those birdies, for those of you who don’t know, are quail. Four of them weigh literally just over a pound, meaning two each would be a nice serving for Significant Eater and me – provided we had some comforting sides to go along.
I didn’t want to do anything fancy/schmancy to the birds, so I figured I’d just roast them. I started, an hour before cooking, by salting them heavily, which works like a brine. While the birdies were brining, I roasted some carrots, potatoes and peppers. After an hour, I dried the birds off and seared them for a few minutes in a hot, cast iron frying pan then stuck them in a hot oven (425° F) till they were done – in this case, about 10 minutes.
Served as is, with those roasted vegetables and you know what?  They didn’t taste at all like chicken; but they were delicious… 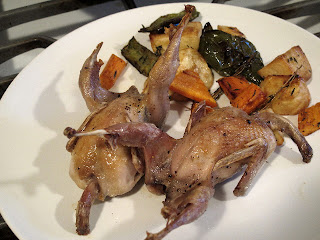 Of course, since quail are such tiny birds, I figured a little dessert might be a nice way to finish the meal.  I happened to have a few good peaches on hand so I cut them in half, took the pits out, topped them with some brown sugar and chopped walnuts and roasted them for 30 minutes.  Served on a plate with a scoop of smoked ricotta alongside, a perfect ending to a very tasty pre-hurricane dinner… 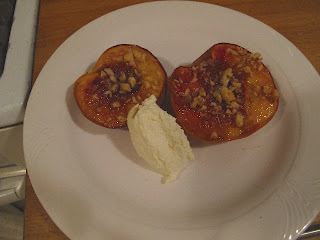 Preparing For A Hurricane (Irene) After An Earthquake (?)

I feel bad. Bad for the earthquake that was epicentered in god-knows-where Virginia this past week. Up here on the 15th floor in lower Manhattan, things were shaking pretty good.  And after my cat and I were done looking at each other for a good 10 seconds and thinking what the heck is going on, I realized it was a friggin’ earthquake.  That comes from 18 years of living in California, and experiencing my share of earthquakes – trust me - there isn’t anything that feels quite like a big earthquake.
So why do I feel bad?  Well, as anyone who lives on the east coast, or anyone that has CNN knows, Hurricane Irene is heading our way. Therefore, everyone has already forgotten about the damn quake. And  hurricanes get named; earthquakes don’t.  They’re just called, for instance, the Great San Francisco earthquake of 1906. Or the Loma Prieta quake; you remember that one - it stopped a World Series game in progress - back in 1989. That was also the biggest one I’d ever been in, and it was quite a shaker.
Now all we’ve been hearing, at least since the god-knows-where Virginia quake came and went, is Irene. Irene this and Irene that. How we need to be prepared. How we need to have potable water. How we need to have a “Go Kit.” Okay, already, I get it.
We have our water (do hurricanes make you thirsty?). Our bathtub is filled to the brim.  Enough batteries to drive a small car. Check. Candles – you bet. It’s like all Hanukkah all the time around here. The Festival of Lights –  no kidding.  Ice – geez - any bruises we might get will be iced down very quickly. Significant Eater and I have enough canned goods to survive a major shutdown of the whole city.  Canned beans. Canned pork. Canned pork and beans. Although as anyone who lives here can tell you, there is always a bodega open somewhere close by; nothing stops those guys.
Oh -  there’s one other thing I always have enough of. Booze. But just to be on the safe side, and because I was in DC this week and happened to stop by one of the greatest liquor stores in the world, Ace Beverages, I picked up some new stuff… 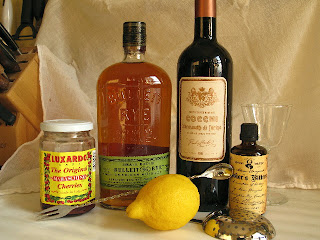 There's the Bulleit (95) Rye, next to a nice bottle of Cocchi Vermouth di Torino, a sweet vermouth first produced in 1891, along with a few items I always have on hand - Adam Elmegirab’s Boker’s bitters, real Maraschino cherries and some other assorted odds and ends.  The Bulleit Rye is a fairly new product, released in March of this year, and has been reviewed all over the web.  At 90 proof and 95% rye, what could be bad?   The vermouth, also released this year for the 120th anniversary of the company's founding, may well give everyone’s favorite vermouth, Carpano Antica Formula, a run for the money.
And last night, getting very ready for the next natural disaster, I mixed up a couple of classic Manhattans for Sig Eater and me... 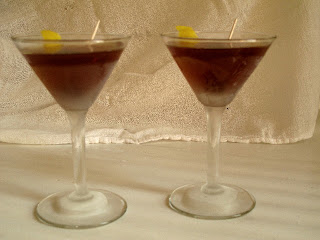 Yes, yes, I know – Im a lazy, good-for-nothing. I've blogged about that before.
But that’s only during the summer, I promise. You know, once the weather cools off, I’m back in the kitchen cooking and baking and becoming a whirling dervish of food.  Strange, though, how the summer, while ostensibly offering the greatest seasonal pleasures that the garden has to offer, also makes me want to do nothing but stay in an air-conditioned apartment or move to San Francisco, only one of which is really possible. Oh well; that’s just me. Actually, I secretly long for those two months a year (September and October) when the summer produce bounty is still real AND I feel like cooking. Whatever.
Of course, there is still some cooking to be done. After all, Significant Eater needs to eat... and so do I.  Indeed, I always make breakfast and I even make lunch, once in a while, on the weekends.
But, I take shortcuts. Lots of ‘em.  And just last week when I stopped by one of my local bakeries,  a bakery that I sometimes slam about their eponymous product, but which I nevertheless love in general... 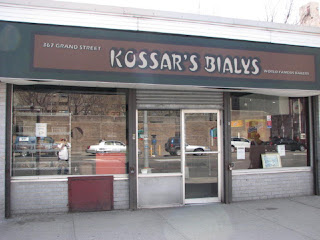 I picked up some goodies for the weekend and I had a brilliant idea (at the same time, no less)...how about a pletzel pizza?
Okay, okay – I know what most of you are saying… “What’s a pletzel?” Much less a pletzel pizza.
Literally, translated from Yiddish (thanks to Arthur Schwartz), a pletzel is a small town square; a piazza perhaps. In Paris, the heart of the 13th century Jewish quarter (in the Marais) was known in Yiddish as the Pletzl, according to jewishvirtuallibrary.org.
Would it help if I told you a pletzel is an onion board? I thought not. Well then, let’s go to the wiki for their definition of a pletzel. Wiki says it’s:

…a traditional Jewish specialty…an onion and seed covered, focaccia-like flatbread. The dough for pletzel resembles challah dough, but it is rolled very thin and is not allowed to rise.

Wait! So it’s actually nothing like a pizza. Made with a totally different dough, with seeds on it and everything; oy. But it still sorta looks like a pizza, doesn’t it? Go ahead, use your imagination… 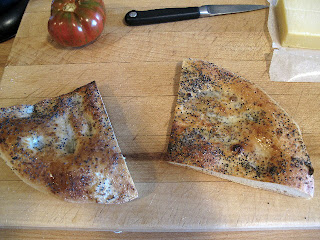 See...I thought so...thanks. Anyway, I brushed that pletzel with a bit of olive oil, topped it with sliced heirloom tomatoes (summer!) and a bit of gruyere I had in the fridge and threw it into the toaster oven... 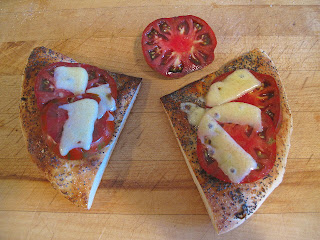 And whaddya know? Pletzel pizza, that’s what. And while it’s nothing like the real deal, it is  a real lazy pizza man’s way out. Sig Eater liked it, or so she said. Well, at least until the fall...
Posted by Mitch Weinstein at 6:05:00 PM 7 comments: