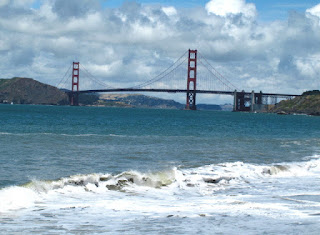 June has been a lazy blogging month for me. There have been computer issues from the time we left town, May 29th, until just recently. Actually, both Significant Eater and I had tech issues at the same time and, because we were tired of our pc’s problems, we’re now the proud parents of Mac computers for the first times in our lives. They’re beautiful children. Where was I?


Last month, an old friend of mine got married (in the middle of nowhere) so SE and I decided to make a mini-vacation of it. Actually, it wasn’t the middle of nowhere; it was the middle of California’s Central Valley, in a city called Manteca. It’s about 80 or 90 miles, as the crow flies, from San Francisco, so we decided we’d establish a vacation base in the city by the bay renting a cool apartment on a street (Jones) that was so steep that walking up or down the street was a potentially dangerous undertaking (especially when slightly drunk). No worries though – we made it just fine, even though both of us suffered various leg aches and pains by the end of the first day. And if you think I complain, you should hear SE…
We arrived in SF pretty early and had a few hours to kill before we could check in so we headed around the corner to Columbus Ave. and a favorite cafe – La Boulange de Columbus, where if you’re lucky you can have a nicely made tuna Nicoise or a decent club sandwich. Very quick and very casual.
Finally checking into our apartment and check out the view from the living room... 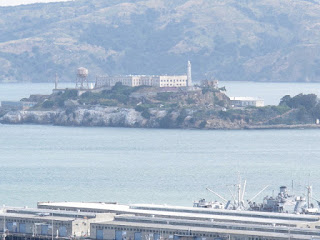 How about this right out the front door... 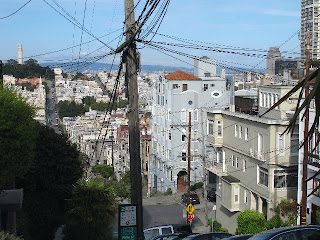 Is that not totally cool, dude, though after the first 10 or 12 times up and down the hill, them dogs are aching.


Recently, San Francisco has been getting a lot of press for how its food scene is once again being considered cutting edge and happening. I guess it (SF) had stopped being that way for a number of years and a number of reasons, and then Chang went and said something about figs on a plate and then all hell broke loose.
Bon Appetit had weighed in (April, 2011) on the subject of SF food before our trip (Richman after, in GQ); eGullet, as always, provided some excellent guidance; friends whose opinions I value had their say and I came up with a nice meal plan, giving us the ability to try some of the highly thought of new places and a few old faves too.
Our first night in SF was a Sunday, and that figured into the equation. We were pretty happy with our meal at Prospect, a newish place from the team at Boulevard, a San Francisco mainstay for many years. We were really happy at the bar before the meal, as our cocktails were expertly prepared and the room is stunning – all natural light and California – y... 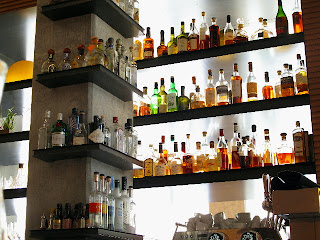 Food wise, the black cod appetizer in a red curry nage was a winner... 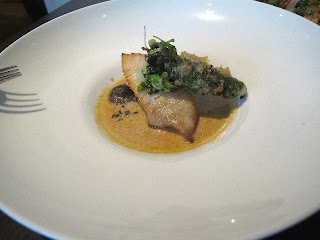 Another appetizer, beef tongue, I didn't like as much...it needed a kick in the pants. It was rescued by my Petaluma chicken entree, simply one of the best chicken dishes I’ve had recently; juicy, tons of flavor, and hooked up with morels, ricotta dumplings and parmesan crisps, it blew me away... 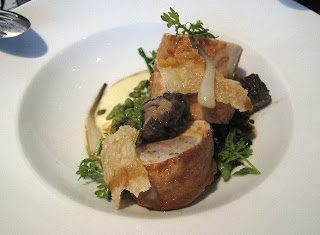 SE’s wild king salmon was simple and elegant, the roasted artichoke hearts and herb oil a nice addition to the rich fish... 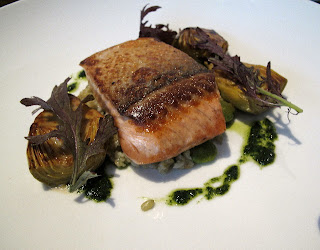 Dessert wasn't anything special, but Prospect is very close to the Embarcadero, perfect for a post-meal stroll with my honey... 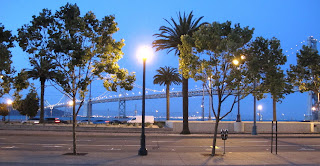 Monday morning started off with a cup of coffee in a lousy coffee shop on Columbus (yes, there ARE lousy coffee shops in San Francisco and I hadn’t bought my beans yet), followed by breakfast at Mo’s, a favorite diner of ours on Grant Ave. Bottomless diner coffee for SE, good eggs and hash browns for us both, and only less than $10 a piece – a real find. Of course, we were hungry just a few hours later, and hit the Ferry Plaza Building (first for a cuppa Blue Bottle) and then to Hog Island Oyster Co. for a snack – west coast oysters both raw... 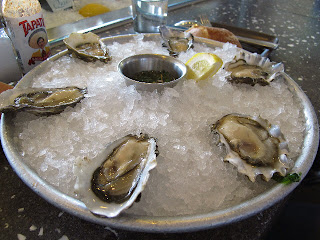 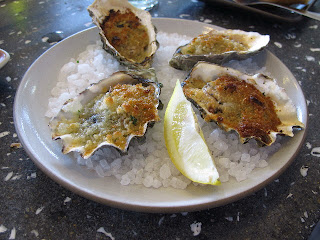 It being Memorial Day, lots of places were closed. Even a few of the cocktail places we wanted to try. No worries – we ended up at a North Beach place I’ve been going to for 25 years – Brandy Ho’s, followed by bourbon and beers at Vesuvio’s just up the block. Brandy Ho’s is good and it’s Hunanese, and those are two things which aren’t found often in NYC… 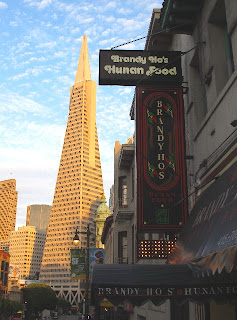 A long walk home ended an early evening for us – but there'll be more where that came from.

What do you do when friends want to go out for a drink…and they want to go out really early? In other words, happy hour. Well, in our case, we try to seek out a place where the food is good (and sometimes cheap), the drinks are good (and sometimes cheap) and that also doesn't feel like the happy hours I might have attended when I was, ahem, in college and 25¢ shots were all the rage.

There is no shortage of happy hours here in NYC, rest assured. But what about a happy hour that is hosted by one of the city's finest restaurateurs? Yep - I'm talking about the guy that has brought us such great places as Union Square Café, Gramercy Tavern, Eleven Madison Park and even Shake Shack - Mr. Danny Meyer.

And one of the places I'm specifically referring to is Meyer's ode to Roman cuisine, Maialino. Maialino has been open for well over a year, and Significant Eater and I have dined there quite a few times. But just last week Maialino started a summer happy hour; weekdays from 5 - 7 P.M. they're offering a number of beers for $5, a shandy (essentially a beer cocktail - also $5) and a bunch of $2 bar snacks, to go along with their already fab cicchetti menu. And if it so happens that you're really hungry and sitting at the bar, well the whole menu is available there too... 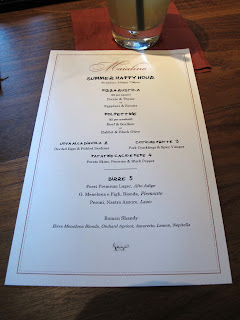 Start with the deviled eggs (we did). Topped with pickled sardines and some crunch, they make a nice bite... 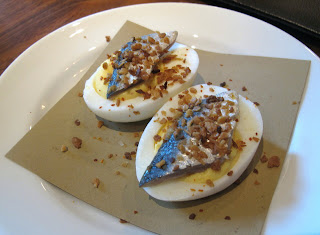 Rabbit meatballs studded with black olives were a standout, while the balls of beef and scallion weren’t bad either... 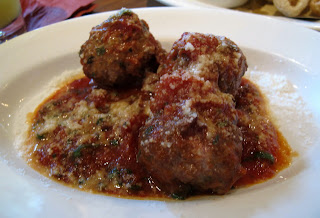 Mini pizze were good – the one topped with thin slices of eggplant was a friend’s favorite, while I wanted more of the potato and ricotta... 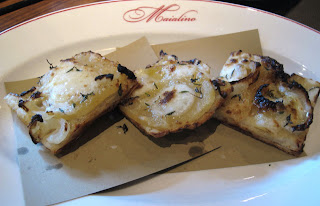 But what really flew off the bar was the cotiche fritte…that’s pork cracklings, y’all. Dipped into the spicy vinegar they were served with, these little morsels literally melted in the mouth... 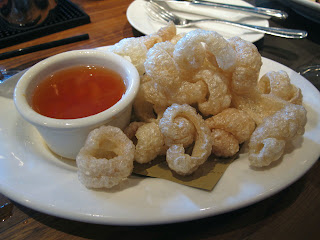 Somehow, we also ended up with a gift from the kitchen; a duo of pastas. Malfatti (badly cut pasta) al Maialino was as good as always – and I’ve had it a number of times in the past. And garganelli with braised rabbit proved that rabbit doesn’t have to be dry and stringy. I need to take a lesson, because the last time I made rabbit at home (in a paella), it was nowhere near as good as in these 2 preps. But I’ll keep trying.

I know happy hour isn't everyone’s cup of tea. But Maialino sure makes it fun. Go – have a shandy and a snack…I’m pretty sure you’ll be happy you did.