Last night I lost a great friend, my cousin Steven Richter, who passed away at the too-young age of 74. Steven was my dad’s first cousin, making him, well, my first cousin once removed. But whatever the family tree, we had developed a nice friendship as adults, once I actually met him. You see, I had never known Steven as a kid - he had long ago moved out west, and by the time I was old enough to know my cousins, he was long gone.

It was only after I moved back to New York City in 1994 that we connected and formed a nice sort of kinship. I was coming “back home” after a couple of decades in California; back to New York to attend cooking school and start on a new journey. And fortuitously, there was Steven, unbeknownst to me the partner of long-time food writer and Insatiable Critic Gael Greene, no less. It was through the two of them that I got my first job cooking in a high-class restaurant in Tribeca – and I still don’t know whether to thank them or curse them out!

Whatever the case, Steven and Gael were always gracious and inviting to me, and then to Significant Eater and me once we became a team. We’ll never forget how they invited us, on our first trip to Italy,  into their Venice apartment during one of their multi-month voyages to a far-flung locale; nor how excited Steven was as he took the two of us around and shared his magical Venice with us – Gael even had to remind him to let us have some time alone!

Then there was that trip to Paris one Thanksgiving, while they were staying on the Boulevard Raspail and Significant Eater and I were staying at, let's just say, a less fashionable address. Nevertheless, we all had a fine time, whether wandering through the Musee d’Orsay or dining at a small bistro just off the Boulevard.

And in New York…well, meals too many to count. Adventures too – Steven and me driving out to Coney Island in the middle of the winter to take pictures (and eat pizza at Totonno’s)…his photographs were always special, and I’m still the proud owner, via some fun bartering, of his classic Nikon N-70 camera, though glad I don’t have to schlep that monster around with me any more.

I also became close to another of my cousins via Steven – his son Nico, whom I had never had the pleasure of meeting until Steven and I got to know each other. A Colorado born and raised kid, Nico would visit his dad occasionally and that’s how we connected. Funny how life works that way.

Not much more to say – thanks for the great times and all the memories we’ll cherish, Steven. And rest in peace, my brother.

Some of Steven's work may be seen here.

Some pix over the years... 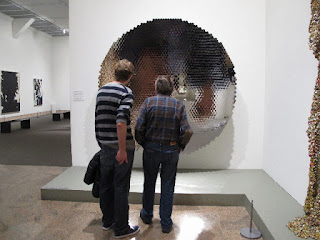 Yeah, yeah, it's hot.  But stop your complaining; you don't hear me bitching about the heat or the humidity or the restaurants and bars that like to keep their windows flung open to the street and their air conditioning off during the dog days of summer (nowadays known as June - September), do you?

Instead of all that complaining, you could do what Significant Eater and I did last night and pretend you're at some sandy beach on the shore of Long Island or Cape Cod having a clam bake with a bunch of your friends.

Sure, you could do that at home, especially if you're lucky enough to have a back yard. But in our case, we headed to the unlikely shores of Carroll Gardens, in beautiful Brooklyn, for a Friday night clambake at Court Street Grocers.

But Sig Eater and I were there because I found out that on Friday nights during the summer, they let you wear one of these... 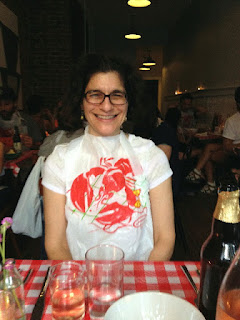 And doesn't Sig Eater look extremely happy?  I mean, she usually is when we're about to eat dinner (or breakfast or lunch, for that matter), but this was gonna be special.  Because we were about to tuck into a beautiful clam bake,  with lobster, clams, corn on the cob, potatoes, sausage, Parker House rolls, drawn butter (and dessert to top it all off).  The clams, littlenecks if I know anything about clams, were sweet and, well, clammy at the same time. The lobsters, which had to weigh at least a pound and a half, were perfectly cooked and full of the sea; not an easy trick when cooking up a big batch all at once. The corn was sweet and juicy, the sausage a bit funky and the potatoes and rolls brought the right amount of starch to our table.

Amazingly, this dinner comes to you for $35 a person, tax (but not tip) included.  And it's BYOB, making it an even better deal...we brought along a big bottle of Doc's Cider, refreshing and crisp for an apertif, and a dry Spanish rosé to go with dinner - it hit the spot.

Go?  I don't know what you're waiting for.  They do Friday night dinners year round, and the clam bake for at least the next couple of weeks.  I don't think there's a better deal south of the Cape. Oh yeah...the air conditioning was just fine! 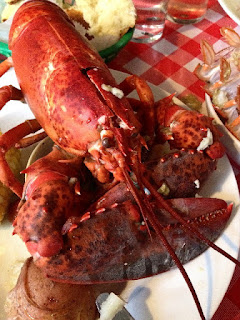