New York City has never been short on bagels.  At least not since the early 1900s, when the International Bagel Bakers Local 338 was formed. Hundreds of bagel bakeries existed - my paternal great-grandfather was a bagel baker in the Bronx - as a matter of fact, he and my great-grandmother are buried in the Bronx Baker's Mutual Aid Society plot at a cemetery in Springfield Gardens, Queens. (I also have a seltzer-man in my background, who sold seltzer off of a horse-drawn cart, but that's another story).  Of course, hundreds of bagel bakers and bakeries meant that there eventually were competing unions, non-union shops, strikes, strife, walkouts, lockouts and all that good stuff that comes along with a good product, the labor that it takes to make a good product...and ownership. Socialism aside (and Socialism is what was behind those early labor unions and why they were important), along came Harry Lender, who basically screwed the pooch, by first mass-producing bagels (with a machine he bought, but didn't invent) and then by perfecting the slicing and freezing of his mass-produced bagel.

Eventually, all hell broke loose, bagels grew to ginormous size, and whoever first put a blueberry into a bagel should get 30 smacks with a stale bialy. When I moved to California (a long time ago), I was sad and missed bagels (and don't get me started on pizza); that is, until I found a bagel place where they actually made bagels the old-fashioned way - hand-rolled, boiled and baked - in San Jo freakin' se. I patronized them for years until I moved back to New York...the land of the giant bagel (I'm looking at you, you decrepit, old, morally, spiritually and physically bankrupt H&H) - the better to make a sandwich on - something a bagel was never meant to do, in my opinion; that's what sliced bread, baguettes, rolls, lettuce leaves (please) and god-knows-what are all for - NOT BAGELS!

Fast forward to 2014 and within the last three months, two brand-new bagel places have opened (and I think there's another on the way).  Both claim to hand-roll, boil and then bake their bagels the old-fashioned way - even if one is Montreal style, and boils in honey water and bakes in a wood-fueled oven, and blah blah blah (I imagine old Harry is spinning in his grave about now). So, what better way to spend some time, with Significant Eater available as a taster, than by trying these two new offerings?

Let's first take a look at the products side by side. Hmmm..... 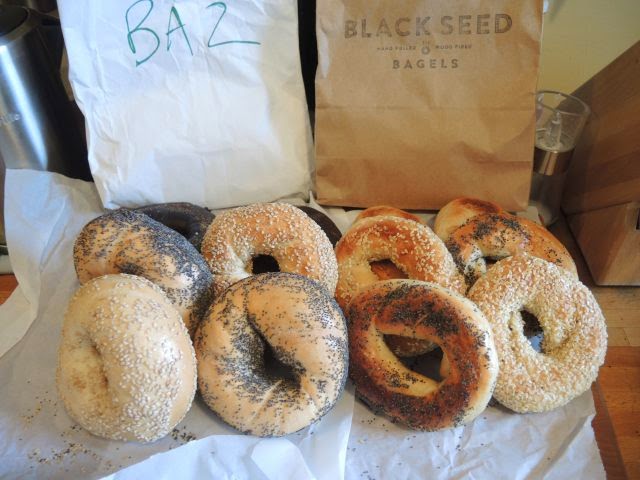 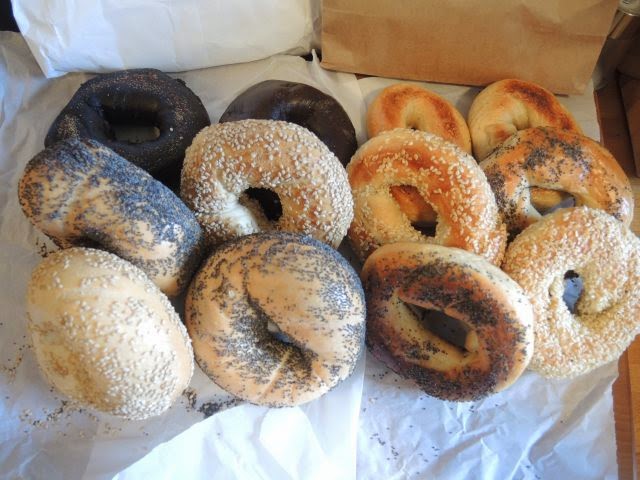 I detect some ginormity in the Baz bagel, as well as a rather generous hand with the toppings... 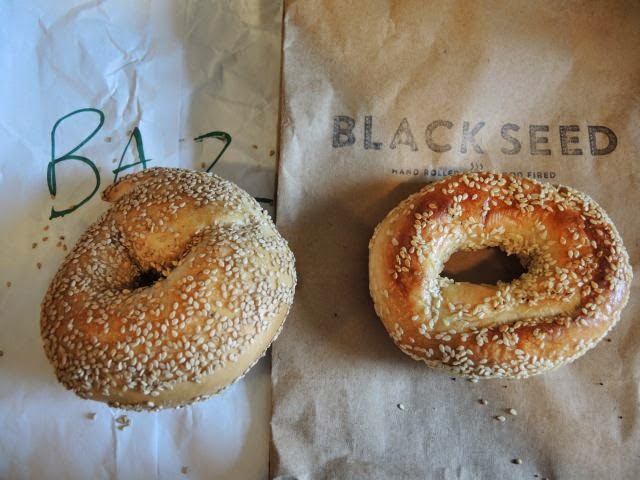 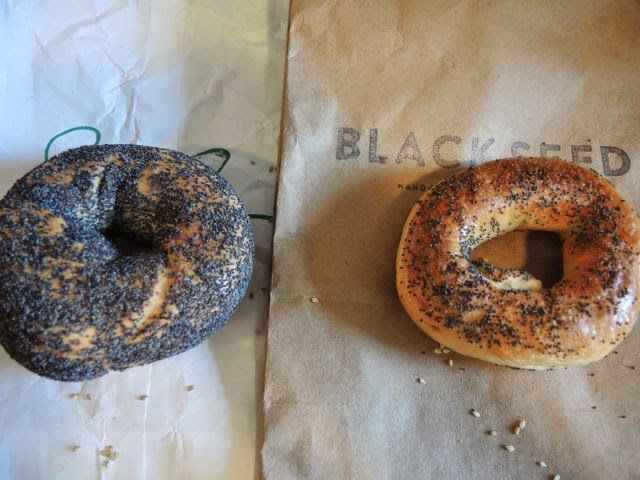 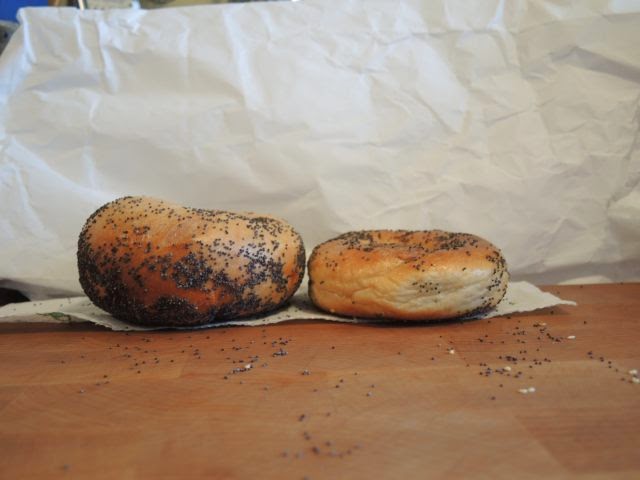 When put on a scale, the Baz bagel weighed anywhere from 2 - 3 ounces more than the Black Seed bagel - which was right in the ballpark of what a real bagel should weigh (just under 3 ounces). Here's an interior view for perspective... 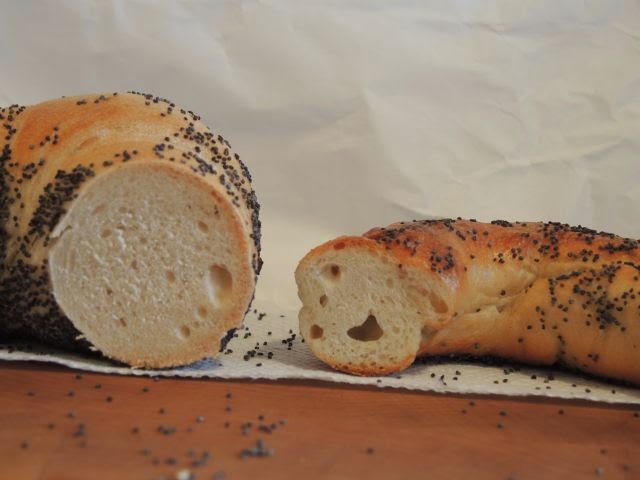 But really, it's all about taste, isn't it?  And to be honest, to really taste-test a bagel, they should be eaten fresh - not the next day, not frozen, not whatever, but because of time constraints, I had to use the toaster.  One half of each bagel was cream cheesed, and one half was buttered... 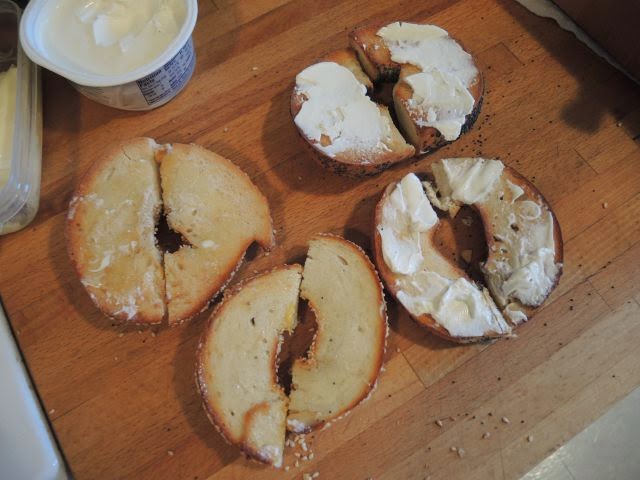 The far-from-final analysis gave us a clear-cut favorite.  The density, the weight, the crustiness and the taste of the Black Seed bagel did it for us...though Sig Eater did note that they were a bit sweet from their honey-water dip. The wood-burning smoke is evident while the bagels are still in their bag, but not really so much in the finished product.  And the Baz bagel, which had a nice flavor, just did not have enough crust-to-crumb ratio for us...it's sandwich sized. Additionally, and don't tell Sig Eater, I tasted the bagels before they were toasted - and liked Black Seed's more that way as well.

Oh - one little thing - I still prefer the minis that Russ & Daughters sells - they're specially made for R & D by the Bagel Hole in Park Slope, and they're my favorite.  You can't make a sandwich on them, and why would you?  Bagels were always meant to be enjoyed, a half at a time, with a schmear and a bit of lox.

So don't worry, great-grandpa Harry.  Someone will get it right one of these days.
Posted by Mitch Weinstein at 1:24:00 PM 5 comments:

The Ship New York is a brand new cocktail bar (lounge, place, joint?) that has just opened at 158 Lafayette Street, so I'd say it's slightly off the beaten path - at this point, although there are hotels and stuff quite nearby.  Its owners and partners have great backgrounds; one is a partner at Little Branch, and two boast stints at places as near and dear as Milk & Honey, PDT, Freeman's, The National, and on and on.  From the outside, it's kind of foreboding... 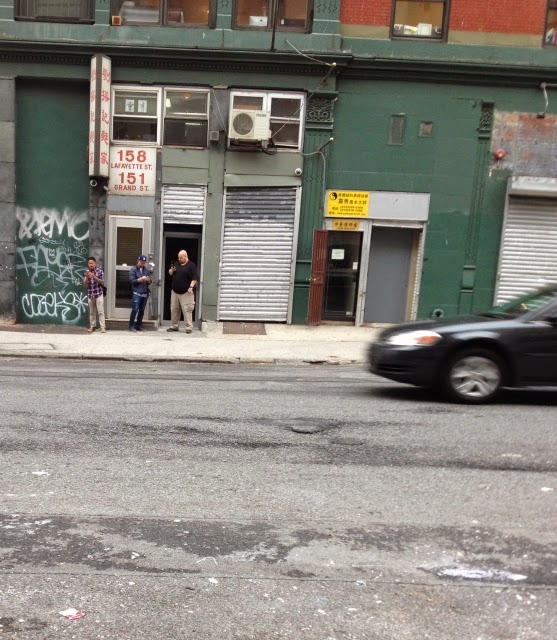 But once inside, it's quite dramatic, boasting high, high ceilings, cool architectural details, great booths, and a fine bar.  It makes you feel like you're in the hull of a...well, really great ship... 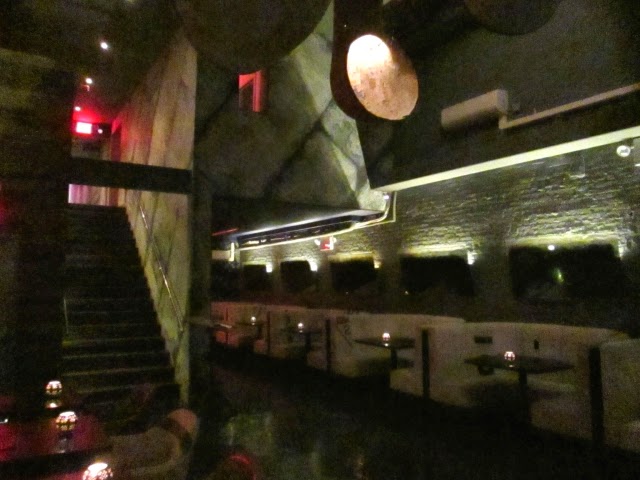 The man in charge of the bar, Cervantes Ramirez, is a well-known cocktailian about town.  He was there at the beginning of PDT, so nothing more needs to be said, other than he's a truly nice guy who knows his spirits.

Before enjoying my first cocktail, Cervantes gave us a tour of the space and the underground tunnels and passageways that led to who-knows-where? I mean, there's also an entrance to the building on Grand Street, and back in the days of prohibition, this part of town was rumored to have lots of stuff going on under its streets.

Once back at the bar, I ordered a Martini (yeah, gin) with both an olive and a twist, or as it's called on the menu, an Oliver Twist.  It was just what was needed on this first real hot, humid and sticky day of summer... 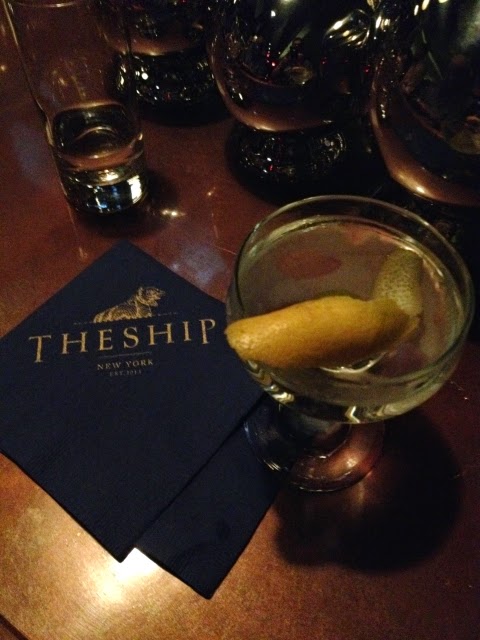 Perfectly executed, and followed by a nice, light Americano. The menu is loaded with classics but don't forget - the knowledge behind the stick is vast, and they'll make you anything you want to drink. I particularly like that they have a drink called a Bartender's Choice, and while certainly not the first place to offer such a concoction, they state plainly and simply on the menu that if you don't like it you can send it back and there'll be no hard feelings. Hospitality with a capital H.

There's also a food menu, with bites that look like they'll go perfectly with cocktails.  Since we had dinner plans, we didn't indulge, but that's just one more reason for a return trip.

The Ship New York
158 Lafayette Street, New York
Posted by Mitch Weinstein at 11:02:00 AM No comments:

The Bees Have It; Bar Primi and Bacchanal, That Is

Restaurants open at a pretty fast clip here in NYC.  As summer approaches, it sure seems like a new one opens every day.  And though I'm not usually one to run to a restaurant that's only been open for a day or two, over the past few weeks we've tried a number of brand-new places.

There was, you'll recall, Bâtard.  Then, over the past week, Bar Primi, Bacchanal and a new ice cream parlor, Morgenstern's. Where to start?

Well, let's start with Andrew Carmellini and Sal Lamboglia's Bar Primi.  I met a friend; we sat at the bar. Had a laugh when I went to move one of the bar stools, which looked heavy and meaty, and turned out to weigh about 4 ounces.  Picked it up with my pinky. And it, like most bar stools these days, was about as comfortable as it was heavy.  But fuggetaboutthat, because we really liked what we ate. One starter, stuffed meatballs, was delicious.  Big, tasty balls, stuffed with a bit of cheese, topped with a fantastic red sauce.  3 to an order - $12, and worth it. Another starter was the baked clams and these I didn't like half as much.  4 to an order - $12...take a pass.

Then on to the pastas - something AC has always gotten right. These were no different; as a matter of fact, they were great. My bucatini with lamb "Amatriciana" was nice and funky from the lamb, with a nice hit (like a good Amatriciana has) of heat. The pasta was cooked perfectly.  Friend's spinach cavatelli was also a winner, served with a white veal sugo and topped with Piave cheese, a full-bodied cow's milk from the Veneto. Good stuff.  The pastas (for now) are all under $20.  Cocktails were OK; there are at least 15 Italians wines on offer by the glass.

On Friday night, Significant Eater and I walked the other way on Bowery, to the corner of Kenmare St., and checked out brand-new Bacchanal in The Sohotel.   Chef Scott Bryan also comes with quite a pedigree.  Cocktail king Naren Young heads up the bar, and the cocktails are, as to be expected, great.  As are the people behind the bar - and I'll give a shout out to both Erica and Vanessa, who took great care of us. But once again, I'll point out that the bar stools are mostly meant for the young 'uns, who will undoubtedly be flocking here as the Bowery morphs into the new Meat Packing district.

While our starter of codfish fritters were just right, we weren't knocked out by the sweetbreads. Described as "crisp sweetbreads" on the menu, I think I was expecting something more along the lines of Chang's seminal popcorn sweetbreads, from back in the day at Momo.  We moved on to a pasta and a risotto dish, both of which, to be frank, left us wanting more. The swiss chard and ricotta agnolotti were kind of one note, and the poppy seeds in the sauce were just, to my mind, weird.  The hen of the wood risotto was served quite soupy, the way a seafood risotto should be served; I guess I expect a mushroom risotto to be a bit "tighter." It's a work-in-progress, obviously, and with a chef this good, I expect it will only get better.

For dessert, we headed up the block to #2 Rivington Street, where Morgenstern's Finest Ice Cream parlor just opened. Significant Eater went inside to order, while I watched the parade go by on the street.  Place was jammed; the ice-cream was good. But I'll probably still head to Il Laboratorio del Gelato, which has always been my favorite for frozen treats on the lower east side.
Posted by Mitch Weinstein at 11:28:00 AM No comments: