I guess you could call it hallowed ground, that space at 239 West Broadway, where some 30 years ago Drew Nieporent, along with a youthful (weren't we all?) David Bouley, opened Montrachet, their ode to fine French cuisine and, of course, fine wine.  At the time, I was living in the San Francisco Bay area, toiling away in Silicon Valley, barbecuing and grilling in my backyard, and heading to Jeremiah Tower's Stars and Berkeley's gourmet ghetto whenever I got the chance.

Montrachet had a fine run, followed in the same space by Corton, with its esteemed chef Paul Liebrandt.  When PL left (after 5 years) to open The Elm in Williamsburg last summer, Nieporent was cagey about what would happen next with this space that has been a destination for 30 years. Fast forward to May, 2014 and now we know; happily, Significant Eater and I got a taste of it this past weekend.

Along with co-conspirators John Winterman (late of Daniel) and Chef Markus Glocker (late of Gordon Ramsey at The London), Drew and the rest of his team appear to have another winner on their hands. My wet Plymouth Martini was well made and served in a beautiful (though unchilled) glass - I hope the $17 tariff will cover breakage, and Sig Eater's Aviation was just right. 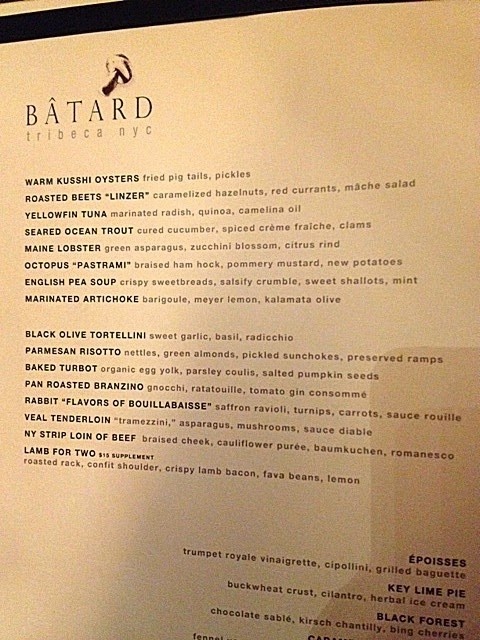 And surprise, surprise...this kitchen can actually figure out how to parse your order, unlike (too) many places that open these days, where the dishes come out of the kitchen when they're ready, not you.  You want 3 savory courses? No problem.  One of you wants to order 3 courses and one wants 4? They can do that - I know because that's what we did; they handled it well, but then again these guys are pros. 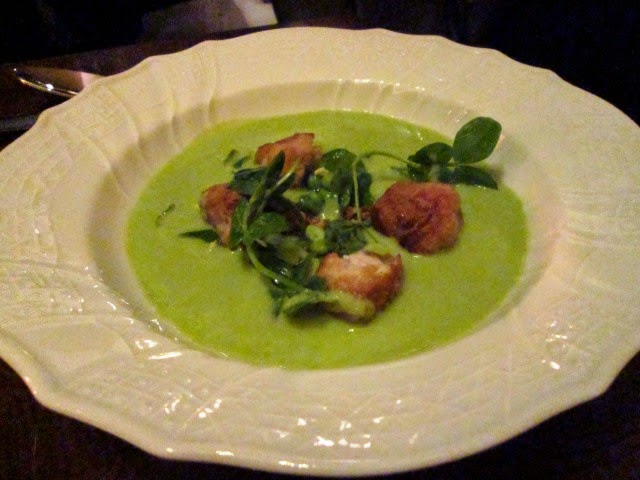 Simple, right?  And just about perfect; the creamy texture of the soup makes those crispy, organ-y sweetbreads even better. Tiny pea tendrils and a salsify crumble add bite and crunch.

Lobster and asparagus make a fine combo, no? 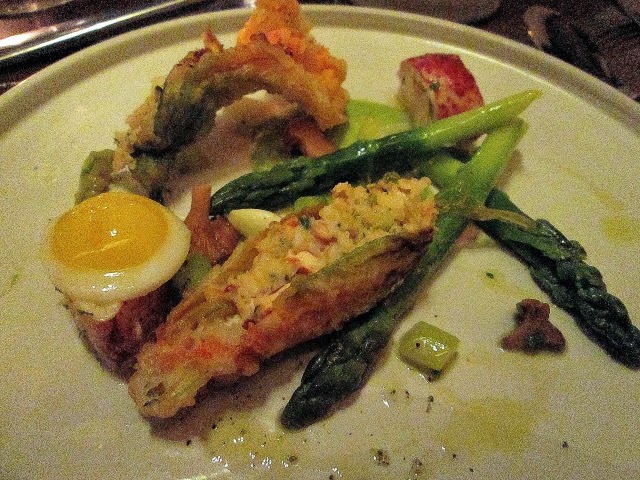 Indeed, here they do, with the chunks of delicate lobster accompanied by stuffed zucchini blossoms and an expertly fried quail egg.   The kitchen was kind enough (and once again, pro enough) to split my second savory onto two plates, so we didn't have to battle each other for that last spoonful of the insanely rich Parmesan risotto.  Beware - if you order and eat a whole portion of this, your appetite will wane, even with the nettles, ramps and sunchokes doing their best to help ward off the gout.

Sig Eater decided to have beef for her main course... 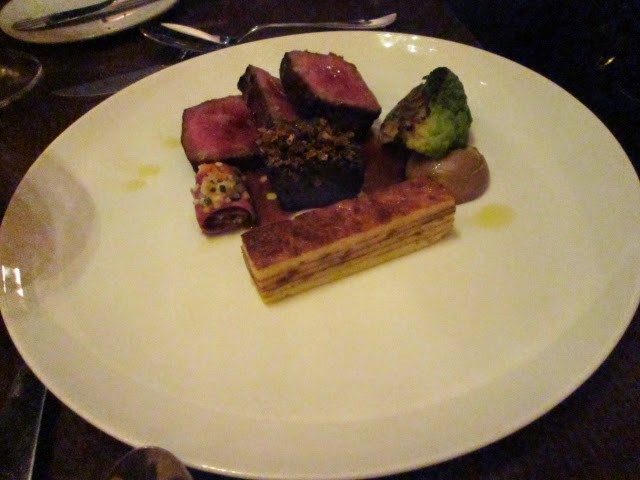 The tender strip was fine, but the braised cheek really brought the beef.  Served with a cauliflower puree, baumkuchen (go ahead, look it up), and Romanesco, this ought to satisfy one's cow craving for a while.

And my main? Rabbit, "Flavors of Bouillabaisse," of course.  I had already heard about how good the rabbit was, but I still was knocked out by the tenderness of the bunny.  And the fabulous saffron ravioli didn't hurt either. Take a look at the little ribs served along with the chunks of rabbit... 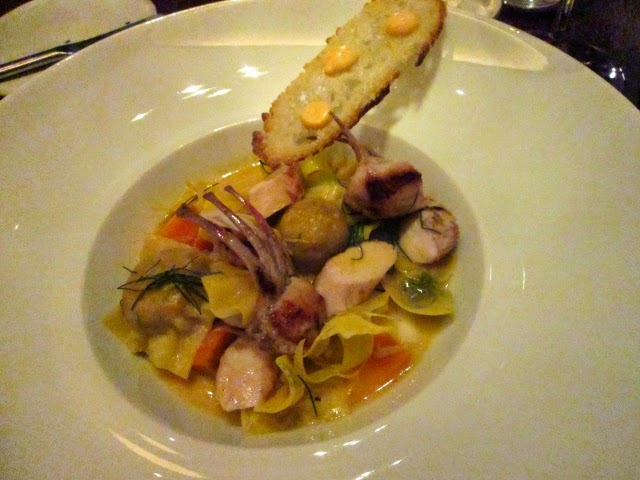 Just a fabulous dish.  Dessert, or rather cheese, beckoned, and we shared our order of Époisses, because eating a whole order would have been, well, decadent.  And then, since the kitchen was out of the Key Lime pie, we were comped the Black Forest, which satisfied Sig Eater's chocolate craving (for the night, at least). I ordered the poached stone fruits, which was fine to counter my guilt for eating like a pig, though you'd really have to convince me to order lemon thyme ice cream if any other flavors are available.

And what to drink with all this food?  Well, I'm a wine neophyte, but the by the glass list seems to go along with a broad swath of the menu... 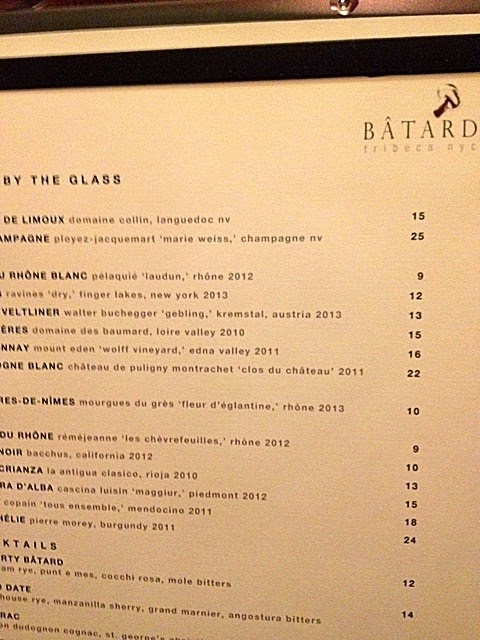 A pet peeve? Sure. When I asked which wine might go nicely with the lobster, I was poured the most expensive glass of white, and then again with my rabbit. And when Sig Eater asked the same question about her beef, you got it - the most expensive red got poured. And then the 2nd most expensive red for a second glass. So be aware - our wine bill was $111, and the 2 cocktails added another $31. It's not a complaint, just a pet peeve - and a caveat emptor - because I could've just as easily ordered a glass by name. I did that with the risotto course, and enjoyed my choice of the New York Riesling with the rich rice.

As I've mentioned in some previous blog posts, Sig Eater and I are celebrating some big-deal birthdays this year, and we're treating ourselves well. But even if it wasn't a big birthday year, we'll happily return to Bâtard.  For a one-week old restaurant, and a first visit, the food and service were fine indeed.