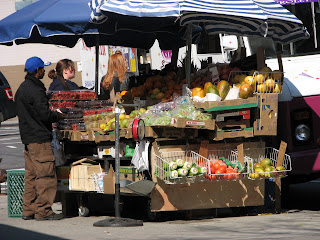 Hey Boss. That's what I hear when I go to my street fruit vendor, pictured above in the blue cap. Whatever you call him (and it's pretty much always a him), when you live in New York City your local street fruit vendor is a very important part of your neighborhood. And every neighborhood has at least 1, perhaps 10, or maybe even 100 of these carts. They're practically on every corner - downtown, midtown, uptown, lower east side, upper east side, upper west side, east village, GreenwichVillage...well, you get the picture.

The street fruit vendor serves a population always on the go. When you're running to the office, who wants to run into a store to pick up an apple or a bag of grapes? Instead you stop at the corner, fork over a buck or two, and you're set. Much of the fruit from these guys tends to be ripe - it's not stuff you're taking home to sit on the counter for 3 or 4 days while it softens. You're buying it to eat that day. And it tends to be a lot cheaper than the stuff in the grocery store.

A good number of these carts sell primarily fruit. Today however, Papi (which is what I call him after he calls me boss) had some asparagus, celery, tomatoes and garlic in addition to many fruits. Piles of berries - there's strawberries, blackberries and blueberries on that cart. Mangoes - last week, he had 3 types of mangoes, including one we ate just this morning, imported from Peru.

Last year, when Papi first set up shop on the corner of Grand and Clinton Sts., there was a loud hue and cry from the neighborhood. Who was this interloper? Of course, the fact the there is a grocery store not 50 yards from this corner might have had something to do with the whining.

Now, given the choice between shopping at Papi's cart or having to go into our lovely grocery store called Fine Fare, where just the fact that perhaps you've forced one of their employees to actually DO THEIR FUCKING JOB hangs over you like the cloud of doom, I'll take Papi any day.

But Papi started getting harassed by the police and disappeared for weeks at a time, only to resurface selling his low-priced goodies. When he first set up, probably last year at this time, he was there 24 hours a day. Selling fruit to drunken stragglers at 1 A.M. wasn't really profitable, so he scaled back his hours. He was gone all winter, but has been at his customary spot for the last 2 or 3 weeks, rather regularly I might add. Perhaps all of his documents, licenses, etc. are legal.

I don't know if the Street Vendor Project, an organization I try to volunteer for at their annual Vendy Awards extravaganza, had anything to do with helping stop the harassment, but their mission is to protect the rights of those who sell on the street. From their site:

There are more than 10,000 street vendors in New York City -- hot dog vendors, flower vendors, book vendors, street artists, and many others. They are small businesspeople struggling to make ends meet. Most are immigrants and people of color. They work long hours under harsh conditions, asking for nothing more than a chance to sell their goods on the public sidewalk.

The Street Vendor Project is part of the Urban Justice Center, a non-profit organization that provides legal representation and advocacy to various marginalized groups of New Yorkers.

So it's good to have him back - and to support these people who are doing the jobs that our immigrant grandparents did more than 100 years ago. Don't forget where you came from. Oh, and yesterday I finally asked him his real name - from now on, it's "Hi Mohammed!"