Early on in Gael Greene's book Insatiable, the Insatiable Critic tells us about a tryst she had a few years ago with the king. No, not that king, the real king - Elvis Presley. When the fun was over, Gael says of Elvis:

He twitched a shoulder toward the phone. "Would you mind calling room service and ordering me a fried egg sandwich?"...the totemic fried egg sandwich. At that moment, it might have been clear I was born to to be a restaurant critic. I just didn't know it yet.

Now, I'm no restaurant critic, and I certainly don't have the food chops of Ms. Greene, and I'll never even get to meet Elvis. But I do like me a fried egg sandwich every now and then, if you know what I mean.

A couple of months ago, I started a thread on eGullet about the fried egg sandwich, and even though Gael and Elvis happened to be in Detroit at the time of her epipahny, I tend to think of that sandwich as our own special breakfast treat.

You see, New York City has an old tradition for people on the go in the morning. And maybe other cities too; but here, it seems like you can pop into any "deli" or any "bodega" and grab a fried-egg sandwich on a Kaiser roll, along with a cup of coffee, for about $2.

People sometimes eat them later in the morning, at which point it's really not a hot sandwich anymore. It's a sandwich that at one point was hot, and was wrapped in deli paper, allowing the heat from the egg to soften the roll...and infuse it with eggy smells.

If I recall correctly (I haven't had one from a deli in a long time), the egg on the sandwich is of the broken-yolk fried egg variety. So the egg is thrown on the griddle or into a hot buttered pan, allowed to set a bit, and then the yolk is broken as the egg finishes cooking.

Then there are the add-ons. To my taste, the only possible additions there can be are bacon, ham, cheese or some such combination thereof. Nothing else - nada - you wouldn't put lettuce on there, would you? Especially if you're planning on eating it later, because then the lettuce would just turn, well - gross.

This morning I decided to make the fried egg sandwich at home. Fortunately for Significant Eater and me, there is a kosher bakery right up the block and Kaiser rolls are easy to come by. Kaiser rolls are, to my mind, the classic container for the fried egg sandwich, but I also bought an onion roll for comparison's sake. Unfortunately, they had run out of the seeded Kaiser, which I like, but I settled for the unseeded variety, to go along with the onion roll. 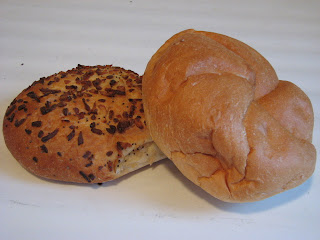 Next, to make the sandwich, I fried up a couple of eggs (yes, farmer's market organic free-range eggs at $4 a dozen) in my trusty nonstick skillet (broke the yolks as you can see from the picture below) - toasted and buttered the roll, although I don't think toasting the roll is "traditional," added a bit of cheese to the sandwich and you know what - it was good. Not quite the same as unwrapping the fried egg sandwich from the deli, where the steamy, eggy smell hits your nose - but it was damn tasty. And I can guarantee my coffee was better too. 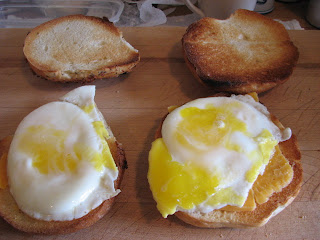 Here's the sandwich on the onion roll. I guess due to the fact that it's not the traditional enclosure, we didn't like it as much as the egg on Kaiser. The near burnt onions mask the flavor of the delicate egg and cheese way too much. 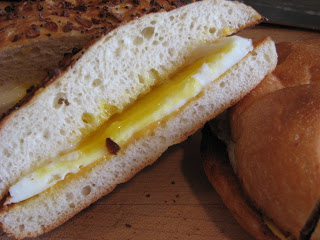 By the way, do you make fried egg sandwiches? Are they good? Feel free to share how you make yours.
Posted by Mitch Weinstein at 3:43:00 PM

Email ThisBlogThis!Share to TwitterShare to FacebookShare to Pinterest
Labels: Breakfast