Say It Ain't So, Joe

One of my favorite places in "the city" for a slice has always been Joe's, on Carmine Street, right where it runs into 6th Avenue, or Avenue of the Americas for those from another planet. We're talking SLICE here, and the dearth of good slice places is pretty much common knowledge, certainly on the island of Manhattan. Oh sure, you can schlep up to Patsy's and hope that the slice you get is good...though it's never as revelatory as a whole pie fresh from their oven. Or you can luck into a decent slice from any number of the million pizza joints that dot the island, but odds are against it. You can get a great slice in the Bronx and Queens, and you can get a great slice in Brooklyn and maybe even on Staten Island, but that takes planning and time. Now if you're from outta town, you probably think I'm nuts, but that's only because your baseline for slice judgment is probably a bit off...and I say that with no disrespect.

So Joe's is a place I've recommended on eGullet and to any number of friends and strangers who ask where they can get a good slice of pizza, because I have always liked their 'za. And it's a classic joint, too. No seats, just some high tables and a bit of a counter along a wall and along the front window...here it is, and you can see the table out front. It's just like the ones inside! 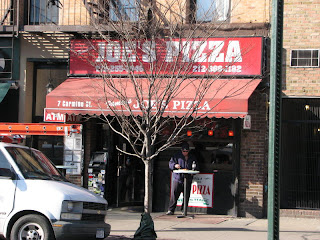 Just the other day I happened to be wandering around the "village," (yes, Greenwich Village, you aliens, you) when the urge for a slice (or two) struck, so I fought my way up to the front and ordered two slices; a fresh mozzarella slice ($3.50) and a "regular" ($2.50). I even was able to nudge my way into a space at the ledge by the front window, a prime spot if ever there was one. My fresh slice looked like this... 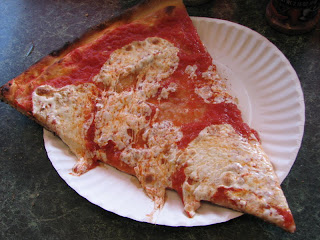 Right off the bat, I knew something was amiss with the fresh slice. It basically cracked into 3 or 4 pieces when I tried to fold it into the classic eating a slice of pizza while standing up style. I like a bit of char on the crust (it's very traditional) but this puppy was black and burnt, as can be seen on the rear edge. That was the color of the whole bottom. It was cracker like and that's not good. Part of me wanted to bring it right back to the counter, but the place was packed and I wasn't in the mood. So I moved on to the regular... 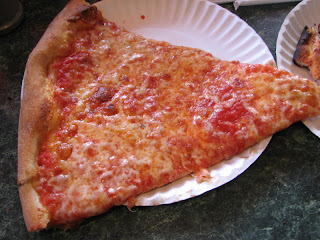 And it really wasn't much better, crust-wise. Once again, overcooked and cracker-like, no fluffy tenderness at the edge or cornicione, and nothing like any other slice I've ever had at Joe's. I mean, on both slices, the toppings were good; but pizza is as much or more about the crust, isn't it? "What the hell is going on here?," I asked myself. 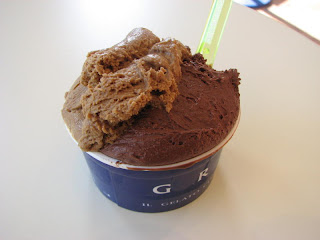 GROM will help make all your pizza troubles disappear...that's half cioccolato all'aranciata and half espresso...and at least that was damn good.
Posted by Mitch Weinstein at 4:16:00 PM