New York City may be experiencing a rebirth of things Italian, not that Italian restaurants ever really stopped, ummmmm, birthing...and for lovers of Italian food (me!) that's a good thing.

Of course I've blogged (there's that word again) about Eataly a number of times, and will probably annoy more in the future - I like the place, what can I say? It makes me happy. I love Lupa - always have since the day it opened. Mario and Joe and Lidia may have their 4 stars at Del Posto, but the realm of Italian restaurant dining changed when Lupa opened.

Jason Denton and his brother Joe have done NYC proud with their introduction of panini to NYC (don't tell me they didn't) at the tiny 'ino eons ago and serve us well to this day with 'inoteca "lower east," 'inoteca "murray hill" and Corsino. And new ones in the works as well, rumor has it.

So what's the latest? It's Osteria Morini, from Chef Michael White and his partner Chris Cannon, who have wowed some in the past with Alto, Convivio and Marea, for instance. Morini is arguably one of the more exciting fall openings, so an early tasting was a must, and the other night a friend and I were able to grab two bar seats at an early hour which we happily did.

The estimable Eben Freeman is running the cocktail program for the White/Cannon restaurant group, and that's a good thing. Eben's cocktails were always a highlight at the late, lamented Tailor. Here, there are a few "low-alcohol" apertivi on the menu at $11, but I went straight for the Negroni-ish cocktail, which was simply a Negroni in proportions of 1.5:1:1, served up. Tanqueray gin and Antica (on tap!) are the two variable elements (you do know Campari is the third, don't you?) and at $14 not necessarily a cheap cocktail, but nevertheless a well-made one. 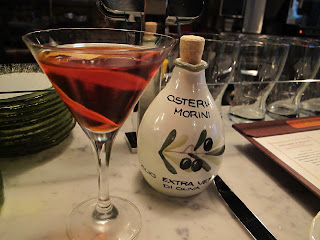 Since my friend was expected to go home and prepare dinner for his wife, we didn't order tons of food; there were some menu items that I must immediately return for, as a matter of fact. But what we had overall was pretty tasty.

For starters, we had the crocchette (croquettes, folks), served naked...just the wonderful smoky flavor of speck infusing molten bechamel - please be careful when eating this gem, or risk interior mouth burn. Our other anitpasto was fegatini, a smooth, luscious liver mousse served with, as usual, too few toasts and is it such a hard concept to serve enough toasts for the amount of whatever is supposed to be spread on them? I guess so, because Morini is hardly the first to skimp on the toast thing. It didn't matter as we fought over every last morsel, reduced to using our fingers to scrape the luscious liver out of its dish.

For our "mains," I chose the strozzapreti (priest stranglers) with braised porcini, the pasta as good as any I've had in recent memory. The braise of mushrooms was almost meatlike, and the pasta is just what my grandma would have made if she was an Italian nonna from Emilia instead of a Jewish nana from Minsk. My buddy ordered another appetizer (remember, he was still having dinner) of fried rabbit, which were quite simply some delicious hunks of fried rabbit - sweet, juicy and all those things that rabbit isn't most of the time. There were a few bitter greens and reds on the plate, to help cut through the rabbit, but we weren't fighting over those.

Dessert and coffee service will be left for another day, sadly. There's a fancy, fully automatic espresso system set-up that may have cost $20K, or may have cost nothing if they're getting their beans from the coffee machine supplier - who knows? But I have a feeling the coffee won't be a highlight of your meal. We were comped an after dinner digestif - a nice ending to a fine meal.

It'll certainly be no problem to add Osteria Morini to the growing list of excellent places to get your Italian fix on.
Posted by Mitch Weinstein at 12:47:00 PM

Email ThisBlogThis!Share to TwitterShare to FacebookShare to Pinterest
Labels: Restaurants