Significant Eater and I have a few traditions on New Year's Eve. Just like in many (most? all?) Asian cultures, we like to eat noodles at some point during the day and/or eve, in anticipation of a happy, healthy and prosperous new year. Of course, some of those Asian cultures celebrate the new year at a different point on the calendar, but for various reasons we still like December 31st - January 1st.
So I was glad to be walking into Sobaya Restaurant, a Japanese place on East 9th Street that has been a favorite of ours for many years. Sobaya has a pretty extensive menu, but their main focus is on soba, that wonderful and delicious noodle made from buckwheat flour. They make them throughout the day and their flavor and toothsomeness is, to this noodle slurper - and noodles should be slurped by the way - unmatched by any other (soba) noodle joint in the city.

I wasn't surprised that they were crowded even at the 2 PM hour; it's a holiday weekend, after all. I was actually surprised (okay, bemused) to see this on the wall... 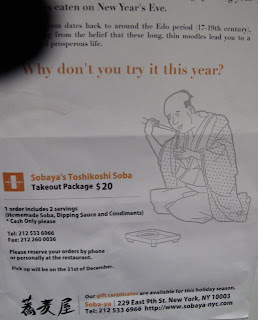 A sign describing Toshikoshi soba; literally meaning "the year is passing" and which is the last thing eaten on New Year's Eve according to the great book Japanese Cooking - A Simple Art.

So, while it wasn't the last thing we ate on New Year's Eve, it was delicious. Here's the hot soba, served in a broth called Kake-jiru along with a side of tempura, in front of a happy, hungry SE... 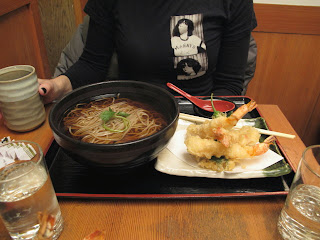 And while Sig E prefers the hot, I like cold soba noodles in a basket (Zaru soba) served with a dipping sauce called Tsuke-jiru... 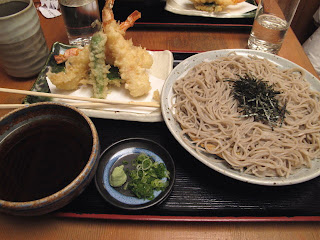 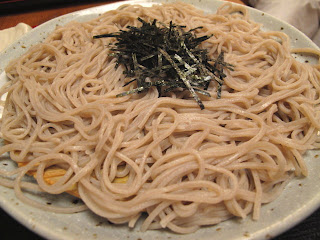 The verdict? Both damn good, the noodles nice and firm and cooked to the point of perfection Japanese style. In Italian, that'd be just past al dente.

Of course, what could be better after a nice Japanese meal than something sweet. They offer ice creams at Sobaya, but we decided on our walk home to stop into the new location of Il Laboratorio del Gelato for a few scoops. Kinda looks like a, mmmm, laboratory, doesn't it? 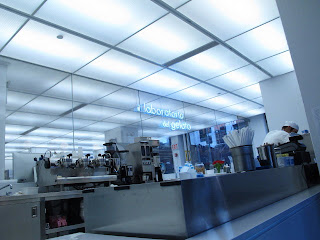 Oh, and I did say New Year's Eve traditions up top, didn't I? Along with the noodle thing there is another, involving one of our favorite artists. For the past 12 years or so, and hopefully for many more, Significant Eater and I go to see and listen to Patti Smith and her band at the Bowery Ballroom. Patti won the National Book Award this year for her moving autobiography Just Kids, and last night she closed with a brand new song Just Kids. Played for the first time ever and a great start to 2011... 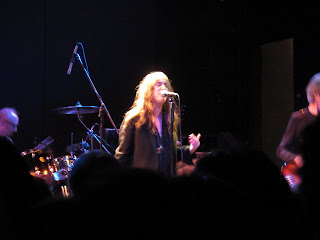 Happy New Year from Significant Eater and me. Let's hope 2011 brings you all health, happiness and prosperity, along with lots of great noodles and songs.