On a Mission at Mission Chinese Food

Last night was "opening" night, and a friend and I were lucky enough to score a pair of seats at Mission Chinese Food, after a nominal 20 minute wait, at the ungodly dinner hour of 6:30; normally, we're drinking at that time - and aren't you?  Whatever; here we were, greeted warmly by the host and hostess (Anna and Aubrey), and invited to share a celebratory beer while we waited for our seats to become available.  Quite festive... 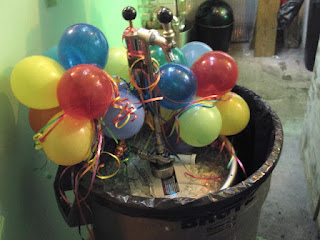 Mission Chinese Food, for those who have either been Rip Van Winkle-ing or who don't check Huff Po, Eater, Twitter, et.al. obsessively every 10 minutes of their life, is the New York City outpost of, ummmm, Mission Chinese Food.  Except that one's in San Francisco, and it opened as a pop-up inside an already existing Chinese restaurant called Lung Shan, on Mission St.

The brainchild of Chef Danny Bowien and partner Anthony Myint, SF's MCF took the food world by storm, and ever since it became clear that Orchard Street and the lower east side would become the home of the 2nd Mission Chinese, NYC's been all atwitter (hmmm) with anticipation.

All well and good.  It's not like there aren't 100,000 Chinese restaurants here already; it's just that most of them suck. I've gone into that before and don't need to go into it again right now, but anyone trying to do the right thing with a great cuisine is OK in my book.  And a quick chat outside with Chef (who might indeed be TV ready, looking all California-cool in his white chef's jacket, white shorts, baseball cap, hipster glasses and flowing tresses) led me to believe that he's very excited to be on this beautiful block of Orchard Street, dealing with some of NYC's fine purveyors both at the high-end (that meat guy) and the ones that supply Chinatown with a vast selection of greens and other goodies.  As a matter of fact, he was simply qvelling when telling me how great some of the prices are here compared to SF - and take that, SF!

The team has also taken what was home to a few less-than-successful fooderies over the years and turned it into a nice, fun space that feels bigger than it really is.  I liked the atmosphere, and there are even backs on all of the chairs, which is good for the altacockers like my buddy and me.

I ordered way too much food, but what the heck?  The sharp tang of Chinkiang vinegar, heat from chili pepper and buzzy numbness from Szechuan peppercorns is thankfully not dumbed down, at least not in any of the dishes we tried. So, for instance, the Chili Pickled Turnips and Long Beans blow open the taste buds but are impossible to stop eating.  As are the Beijing Vinegar Peanuts, meant to be eaten one at a time with chopsticks - order these immediately, so you can eat them with your beer.

The Tea Smoked Eel was a favorite of ours; it's wrapped in cheung fun, a rice noodle made on the spot at a few places around Chinatown; as a matter of fact, my very first blog post was about this type of noodle, made around the corner at Sun Light Bakery! 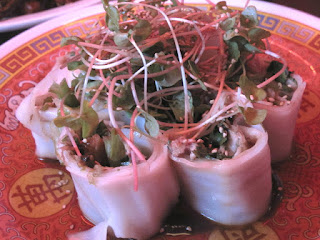 I think my favorite dish last night was the Mouth Watering Chicken, a chicken "terrine" with dry-spiced chicken hearts and vegetable "noodles."  The hearts are cooked medium-rare, lending them a unique flavor and tenderness, and the breast is nice and moist. They hit it out of the park on this dish... 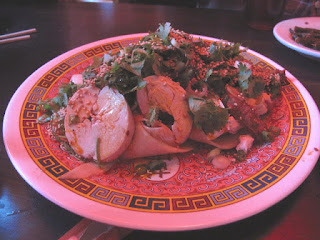 Was everything perfect?  Hell no...I would've liked a little less salt (or saltiness in whatever form) in the Broccoli Beef Cheek with Smoked Oyster Sauce, impossibly tender beef nestled under a bed of some sort of Asian broccoli.  But it's oyster sauce and that stuff is, shall we say, saline (and I ate all the cheek anyway).

So - when am I going back?  As a matter of fact, I've already made a reservation for this coming Sunday night. They're taking reservations, but only for the bar seats at this point. Otherwise, it's all walk-in.  And delivery. And lunch soon.

Orchard Street sure has been looking better and better; now with Mission Chinese Food hitting the street running on all cylinders, it's gotten that much more tasty.
Posted by Mitch Weinstein at 8:43:00 AM

Email ThisBlogThis!Share to TwitterShare to FacebookShare to Pinterest
Labels: lower east side, Restaurants