15 years.  That’s a long time, isn’t it? Well, that’s precisely how long Significant Eater and I have been married. Back on February 9th, 1998, we tied the knot in a lovely ceremony in that most romantic of cities: Las Vegas.

It was a brief ceremony, attended only by our parents and the officiator, who was (possibly) a clerk of the court of Clark County, Nevada. Yes, we got married in the courthouse in downtown Las Vegas, because after all, what’s a wedding unless you’ve spent $35 on it?

We did have a blowout dinner at the fancy Vegas outpost of a Jean-Louis Palladin restaurant, arriving as we did by stretch limo.  Then we gambled; and even if we didn’t win any big bets, I sure won big by marrying the love of my life.  After a night or two in Vegas, Sig Eater and I flew off to San Francisco, probably our second favorite city in the entire country, and spent a lovely honeymoon week.

And that’s where we’re headed today, to San Francisco, because it still and will always be one of our favorite places, The great food, glorious views, old friends (many of whom we won’t get to see on this trip, sadly) and fabulous memories.

So we flew out ahead of the super super storm Nemo – and really, do we have to name every freakin’ weather event now?  Originally, we were scheduled to fly out Saturday morning, but we were lucky enough to change that to a Friday morning flight, beating Nemo out of town.

And we’re flying on JetBlue – which as airlines go, is probably one of the least heinous there is.  Although I gotta say, when you buy a snack pack on JetBlue, you’re single-handedly ensuring the destruction of the environment. For a mere $5.99 (credit cards only, your cash isn’t good up here), just imagine how many rain-forest trees it took to package this goodie-box up… 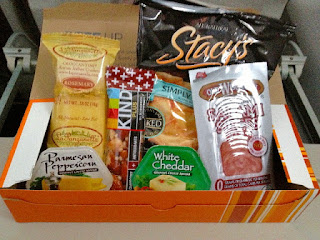 Not only that, I’ve already consumed enough sodium to send my cardiologist into spasms.  Ah well, it’s worth it when you’re with the love of your life.  As Ralph once said, “Baby, you’re the greatest.”  And Tasty says it too…Happy Anniversary, Sig Eater!
Posted by Mitch Weinstein at 9:13:00 PM