Close to my apartment, East Broadway enters into Chinatown, and a whole new world awaits. Coming out of the subway yesterday, I was hungry for some hand pulled noodles, and started walking towards the now widely reported upon Lan Zhou Noodles, which makes some pretty darn tasty noodles of the hand pulled variety.

However, the activity at 160 East Broadway, Sun Light Bakery Corp., caught my eye, and I wandered into the tiny storefront, presided over by two very non-English speaking women (there was a lot more activity going on in the back of the shop, which was seemingly cranking out buns at a rate much greater than could be sold in the front of the shop). Fortunately, there was a young, bilingual speaker getting an order, and he helped me negotiate the offerings.

Okay, to start with, I've never seen one of these: 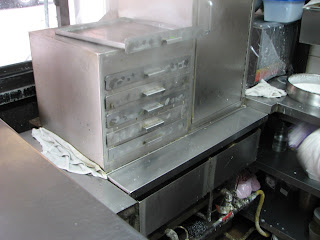 It is some sort of steamer, crepe maker thing, into which one of the women puts a bit of pork (or beef, or chicken evidently), and then pours a ladleful of batter on top - the batter can be seen in a bowl on the far right. Then, some chopped scallions and cilantro are scattered about and the pan is whisked into the cooker. 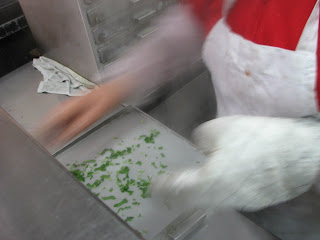 After a minute or two, the drawer is pulled out, and the cooked product is cut up with a plastic dough scraper...here's a semi-action shot: 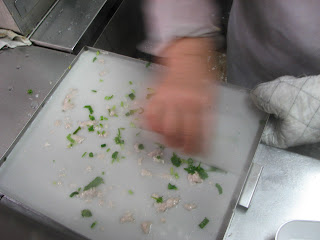 A few sauces are put on top, and the finished product looks like this: 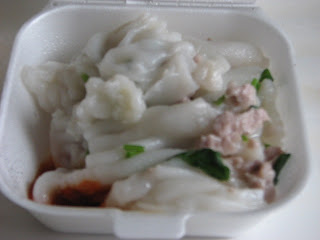 It was delicious - and different from the more traditional rice noodles, which it so happens are available from a little cart at the corner of Jefferson and East Broadway, and which I also bought in order to do a comparison :smile: . These noodles come with fish balls, and you get 5 of them and a portion of noodles for $1.50; the cart also has other offerings, including curry squid, lotus-leaf wrapped rice and congee, which amazes me, since there is literally no room to turn around inside the cart. It makes some of those coffee carts in midtown look like townhouses compared to a studio apartment.

The noodles from the cart are a little chewier, and are sauced in a much sweeter manner - i.e. with hoisin, sesame, and a "hot sauce," whereas the freshly prepared crepes are a bit more savory and tart. 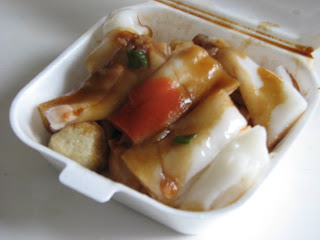 Either way, both are delicious. And Sun Light also sells a bun, huge, with a pork filling, but not roast pork. My total for a bun and the noodles at Sun Light was $2.25, meaning I spent $3.75 for lunch and couldn't finish it all.

So, China-philes, are these chow fun or something else?
Posted by Mitch Weinstein at 4:38:00 PM