I Vote...for The Gibson and the Old Pal

We finally got to try out The Gibson last night, and we weren't disappointed. I'd been wanting to go since we first started our excellent DC adventure, but you know, sometimes things just don't work out the way you plan. However, it was worth the wait.

Friendly and knowledgeable bartenders are always a plus, and the new fall menu had just been released. Wanting something a bit bitter (who, me?), I opened with a Rabbit Hole, comprised of Ramazotti, Campari, Creme de Cassis (Clear Creek, iirc), lemon juice and a flamed orange peel for garnish. Eminently likable, especially if you like your drinks a bit less "boozy."

Significant Eater began her evening with a Kentucky Racer (ahhh, those Albuquerque gals), a nice Manhattanish spin made with Old Overholt, Punt e Mes, Kubler Absinthe, Allspice Dram and Peychaud's to finish. Here's a picture, and remember, it's in a bar and it's a brand new camera... 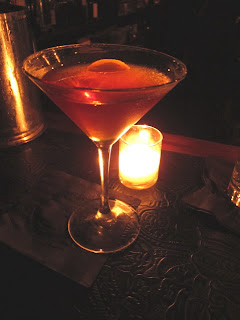 After round one, we moved into heavier booziness, as I drank a well-made Old Pal, and Sig Eater went with a perfect Manhattan. The Old Pal, another Manhattan-style cocktail but much more bitter, is one of my favorite drinks. If I could recall the 5th drink, which we "shared," I'd tell you it was as good as the first 4.

They also have started serving some light food from a kitchen upstairs - in just the past week or so. We didn't eat, though the menu looked good, and after we ended up with lousy burgers at the Black Squirrel in Adams Morgan, I wish we had partaken. Oh well, we liked The Gibson enough that we're sure to return. Especially when the bartenders are as great as this one... 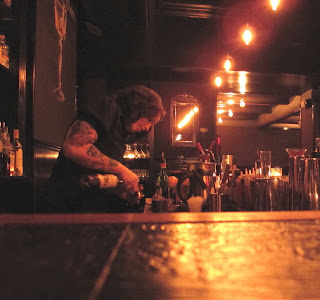 As for the Old Pal, there appear to be a few different ideas on how to make this cocktail. In The Savoy Cocktail Book, a classic if ever there was one, Harry Craddock called for equal parts of Canadian whisky, French vermouth and Campari. Harry, of course, is the man credited with saying, when asked what the best way to drink a cocktail was, "Quickly, while it's laughing at you." So he's got that going for him. Some other weird website had the vermouth as sweet; that's wrong and that's more likely a Boulevardier cocktail. Or call it a 1794 - a drink I first had at Rye in San Francisco. Confusing, isn't it? Well, no one said cocktails were an exact science, and as long as it tastes good to you, who's complaining?