The other night, a friend and I paid our first visit to the recently opened Experimental Cocktail Club, a branch of the cocktail lounge that first took Paris by storm in 2007 (and was followed with an ECC in London).

ECC is in the old Kush space. Kush was a lounge that I was never fortunate enough to set foot in - or, looking at it another way, fortunate enough to never set foot in. What's interesting is that the Paris ECC was modeled after the new wave of cocktail lounges that were opening here during the first decade of the '00s, and now NYC's ECC looks like the type of lounge you might expect to find in Paris. If you think this is confusing, it's not - our ECC is absolutely gorgeous inside, designed by the wife of one of the owners; lots of French flea market finds, and I wish my living room looked as nice as this. My pictures do not do it justice... 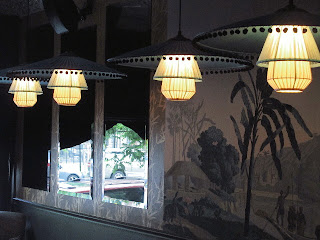 The back bar is quite nice... 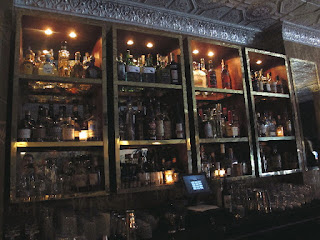 And the glassware is really pretty, at least for now (because y'all know what happens when the stems start breaking)... 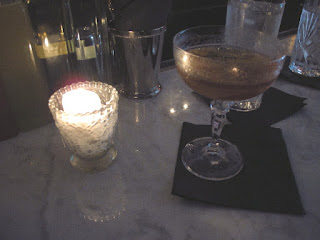 Pictured above was my first cocktail, called Black Heart,  a Joseph Akhavan creation at La Conserverie in Paris, and it's made with Buffalo Trace bourbon, Cynar, Luxardo Maraschino, a touch of French Roast Coffee, Bitterman's Boston Bittahs, a Laphroaig rinse and orange oils. A real winner, balanced as can be. My drinking companion started with the L'Américain: artichoke infused NP Sweet Vermouth, toasted walnut infused Campari, thyme water, orange oils - all of which is carbonated and bottled and served like this... 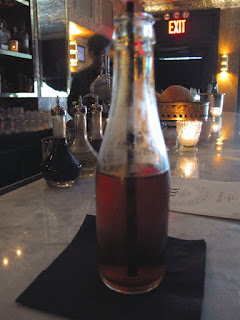 That'll be perfect for when the kids pour in on Thursday, Friday and Saturday nights and can't hold a glass. The drink is damn good, though it probably can use, and probably will get (see below), some heavier carbonation.

I followed up with a classic Manhattan, and it was nice to be asked by my bartender Aaron whether I wanted a 2:1 or 3:1 ratio; I'm a classicist, so my 2:1 Rittenhouse Manhattan, with a twist, was just how I like it. My buddy moved on to a drink called The Artist: Drouin Calvados, verjus, pear and apple cider shrub, Peychaud's, Didier Meuzard Ratafia, Vieux Pontarlier Absinthe and Billecart-Salmon Champagne to top it all off - wowser.

Many of the drinks are creations of bar manager Nicolas de Soto, a Frenchman who now lives most of the time just off of Avenue B. Some of you may have seen him behind the stick occasionally at Dram - I know I had. Nicolas' drinks are pretty complex, with lots of infusions, but as I said above, balanced and delicious. He'll be working the bar here some nights, and overseeing the show all the time - a true gentleman who is as nice as can be.

Okay, okay - we did have a third round; after all, we were checking the place out. By this point, the place was filling up, and Xavier was working our end of one of two bars. He's a 7-year alumnus of Daniel, and quite the pro. So, the appropriately named The Last One: Cardinal Mendoza Brandy, Bonal Gentiane, Cocchi Barolo Chinato and Akanono carrot Shochu. Simple, and practically an aperitif, no? And the Curious Prescription, a tequila/mezcal lover's dream: Pueblo Viejo Reposado, Pukhart Pear Eau-de-Vie, La Cigarerra Manzanilla Sherry, housemade salted mezcal caramel syrup, lime juice and Bittermen's Habanero bitters.

In order to continue establishing a relationship with the bartender(s), something everyone should do, I had to return on another night, especially since a friend and I were practically around the corner at a gallery opening.

I might've found a new favorite cocktail, as the Noblesse Oblige was the first drink I tried on this second visit. Cognac based, with both Pedro Ximenez and Del Maguey as sidekicks, it's another one of Nicolas' fine, fine cocktails. It'll probably stay on the menu, though he did say that he finds people here shying away from Cognac cocktails, which I think is a big mistake; cognac cocktails rock, in my opinion.

My friend started off with the Black Heart and immediately pronounced it his "new favorite drink." He also tried the L'Américain, the drink served in the bottle and pictured above; they've got the carbonation level up to where it should be now, making the drink that much tastier.

I wanted to start experimenting a little, though the bartenders are not heading off-menu much at this point, trying to learn the complex cocktails on the menu; however Aaron was kind enough to mix me up a perfect Vieux Carré.

Food will be coming soon from what I hear; bar snacks will be supplied by The Fat Radish, another one of my neighborhood faves.

I expected, and have heard from Nicolas, that ECC has already been  packed on the weekends...and will continue to be so. Doesn't matter to me, though - we rarely go out for drinks on Friday or Saturday nights - and if we do, it'll be earlier than the throngs. Though since I've yet to explore with Significant Eater, I have a feeling we might end up here later this week.

And finally, here's a tip to all the Cosmo drinkers out there - if you want cranberry juice in your drinks, go soon. From what I've heard, it won't be available for long and if it stays on the menu, you may be paying a pretty premium for it. Instead, have a real cocktail made by people that know what they're doing.  You'll thank me, and them, for it.

By the way, there was a complimentary drink or two along the way. YMMV.